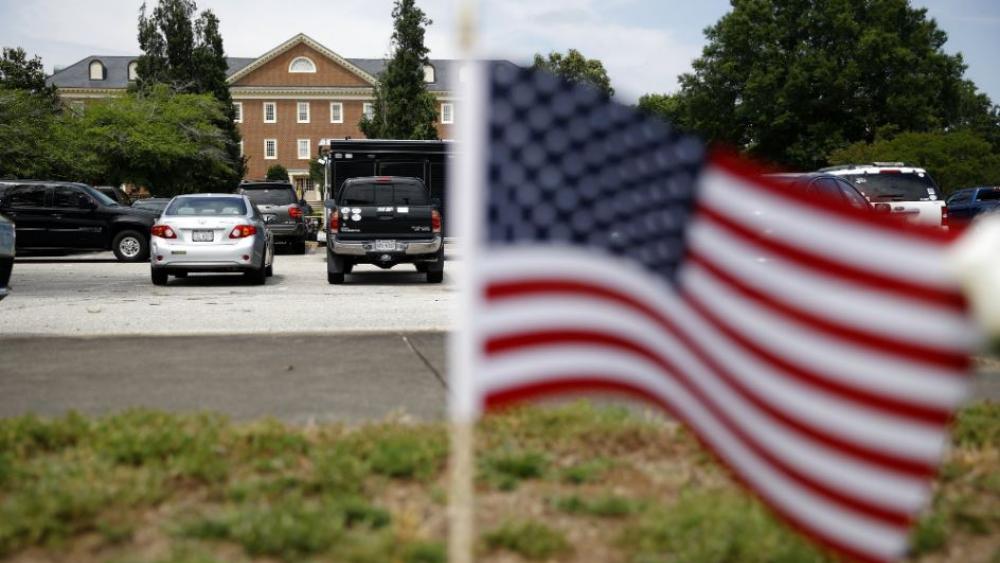 An American flag that is part of a makeshift memorial stands at the edge of a police cordon in front of a municipal building that was the scene of a shooting, Saturday, June 1, 2019, in Virginia Beach, Va. (AP Photo/Patrick Semansky)

The suspect in an attack that left 12 people dead at a government building in Virginia Beach sent an email announcing his resignation earlier that day, officials said.

In a press conference Sunday morning, City Manager Dave Hansen said the suspect was in the process of resigning from his position and confirmed a resignation letter had been sent via email.

The suspect had not been terminated and was in good standing with his department, Hansen said.

Law enforcement officials said DeWayne Craddock, 40, shot one victim in a car Friday before he entered the building, firing at people on all three floors.  He was killed after a gunfight with four police officers.

Virginia Beach Chief of Police James Cervera said the investigation remains open and authorities are still searching for a motive for the suspect's actions.

When asked if the interviews so far had turned up any motive, Chief Cervera replied, "We do not have anything glaring." He then asked anyone with any information to come forward to help in the investigation.

Cervera gave a timeline of events: The dispatch call went out at 4:08 and the officers arrived on scene within two minutes. The officers located and engaged the suspect on the second floor within 5-8 minutes after arriving.

Cervera called the building – built in the 1970s with many additions and reconfigurations since – "a maze" and described an ongoing gun battle with the suspect moving through a nest of offices and firing upon the officers as they pursued. The suspect eventually locked himself in an office, forcing the officers to breach the door, where they found him wounded and administered first aid.

From the time the first call went out until the suspect was removed from the building 36 minutes had passed.

Hansen said the city's family liaison team of officers and chaplains had contacted all of the victim's families and are in the process of contacting the four wounded people who are still in the hospital.  All are listed in critical condition. They have all had multiple surgeries and one victim's status went from fair to critical after surgery.

"We want them to know our prayers are with them," Hansen said. "They are not alone."

Prayer vigils were held over the weekend to remember the victims in several churches across the Hampton Roads area.

The City of Virginia Beach announced a memorial service for the victims will be held at 7:00 pm Thursday at Rock Church located at 640 Kempsville Road.

The suspect's family taped a handwritten note to the door of their home on Saturday sending "heartfelt condolences to the victims."

ABC News reports the large handwritten message read: "The family … wishes to send our heartfelt condolences to the victims. We are grieving the loss of our loved one. At this time, we wish to focus on the victims and the lives loss during yesterday's tragic event.  Our thoughts and prayers are with the families of those who loss their lives, and those recovering in the hospital."