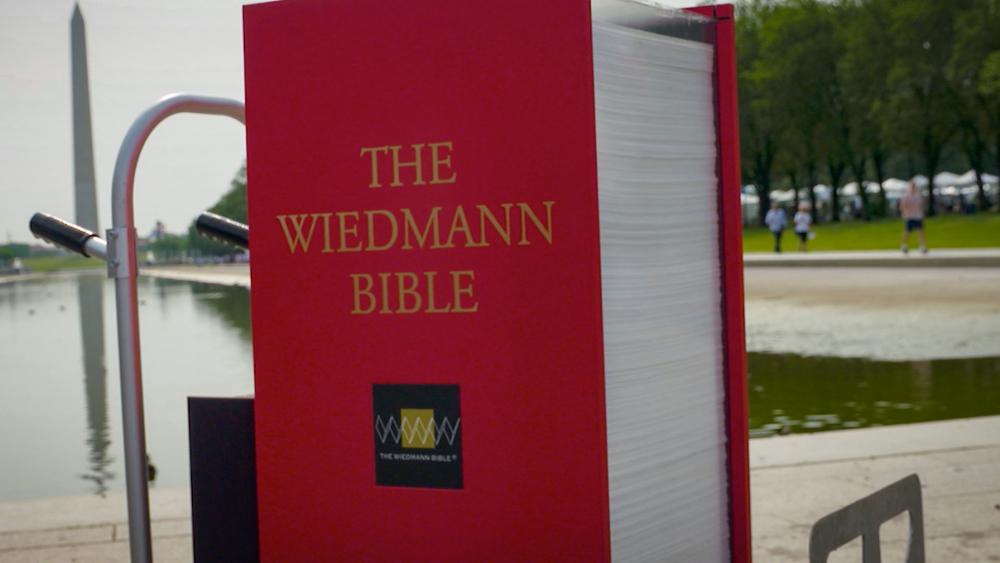 WASHINGTON, D.C. — There was no 'separation of church and state' on the National Mall in Washington, DC this past weekend. The entire Bible was on display.

But it wasn’t just words on pages. It was every single part of the Bible, illustrated by a professional painter, and then all those paintings lined up next to each other, all the way around the Reflecting Pool between the Lincoln Memorial and the World War II Memorial.

More than 400 volunteers each held up a few yards of the mile-long creation of German painter Willy Wiedmann.

“It’s the world’s longest Bible, arguably the world’s longest illustrated book. And this is a chance for us to show it off to the District and to the nation,” Ken McKenzie, Museum of the Bible CEO, told CBN News.  “3,333 panels – that is the entire Bible from the beginning to the end.”

Wiedmann put many years of his life into this project, and McKenzie said he was excited to see Wiedmann’s work completely displayed for the first time ever in America.

A Bible for Those Who Can’t Read?

“He believed that about a third of the world’s population either couldn’t read or couldn’t learn through words. They had to learn pictorially,” McKenzie explained. “And that was his motivation to spend 16 years of his life to create this amazing Bible.”

Wiedmann’s son Martin came all the way from Germany for the display and to represent his father’s vision.

He told CBN News, “There are more than a billion people illiterate – people who can’t read and write – and that’s one way for them to engage with the Bible, through visuals.”

The world might never have seen this treasure. Wiedmann said of his father, “He couldn’t find a publisher to publish 3,333 paintings. It’s just the technique wasn’t there, and it would have been unaffordable.”

A Treasure in the Attic

The painter hadn’t even told his own family about the massive work.

“It was a total surprise when I discovered it,” Martin Wiedmann said. “He put it away in four big aluminum cases, which I found, after he died, in his attic, all the way in the back.”

The Wiedmann Bible is on long-term display at Washington’s Museum of the Bible and can also be purchased in a digital format.

Jesus with Wild Blonde Hair, God as a Triangle

Wiedmann borrowed from many schools: surrealism, cubism, abstract expressionism.  Many of his paintings in the Wiedmann Bible look like they could have been done by Pablo Picasso or Peter Max. It led to a whole different look for biblical subjects. For instance, Jesus Christ usually appears with wild blonde hair, sometimes shooting out in massive strands in all directions around his head.

But no matter how people felt about the style, it was one massive biblical wonder to behold as some 400 people held the 3,333 paintings all connected together in a long, long line stretching from the Lincoln Memorial down to the World War II Memorial and looping all the way back.

The painter’s son exclaimed at the event, “To have a mile-long picture around the Reflecting Pool in the form of a Bible – this is unheard of!”