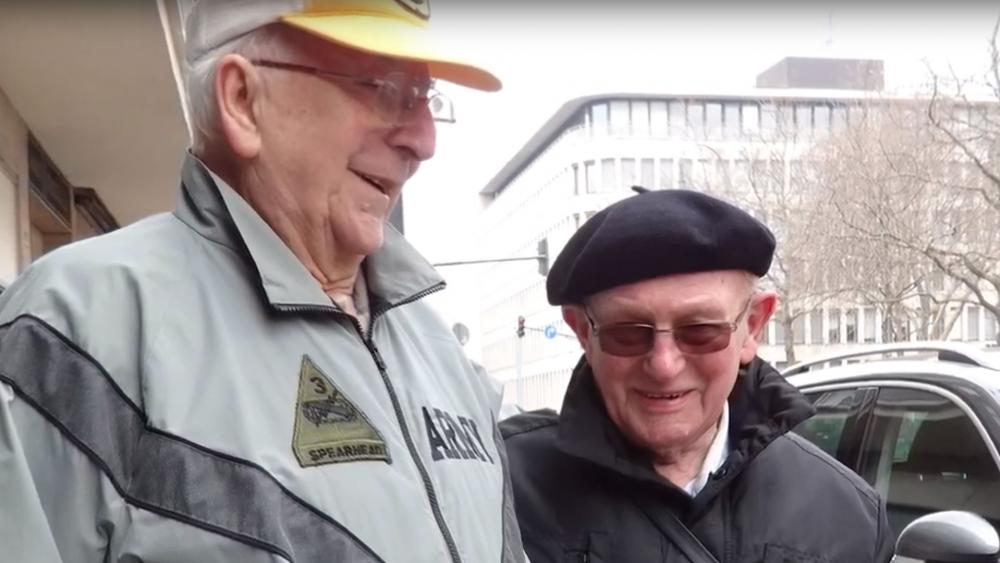 The true story of Spearhead: An American Tank Gunner, His Enemy, and a Collision of Lives in World War II debuted at number four on the New York Times bestseller list in 2019. That’s likely because it’s filled with emotion, romance, horrifying loss, heartbreak, and duels of such suspense and action, they beat most other fights in fiction bestsellers.

It focuses on several Allies ramrodding their tanks through Europe.

Author Adam Makos said of them, “They led the way to victory. I always thought the paratroopers or the infantry guys were the first in front. But really these men in the Spearhead division, that was their specialty: piercing through the enemy lines and winning these big battles.

He added, though, “There was a big downside: they lost a lot of men, a lot of tanks.  They paid a lot of sacrifices.”

Makos’ main hero is gunner Clarence Smoyer, whose crew was handed a tank that was better than all the others right towards the end of the war.

21-year-old Corporal Gets the War’s Most Advanced Tank

Makos explained, “We had the Sherman tank and we thought it was the best tank ever.  And then the Germans just kept getting bigger and better, and they were beating ours around.  As an emergency measure, we had to rush these 20 Pershing tanks to the European theater.”

He told CBN News, “Our hero Clarence got one of them. He was just a 21-year-old corporal from coal country, Pennsylvania, and now he’s given the most advanced tank in the American arsenal, the only tank that can go toe-to-toe with the Germans. And with that comes a new responsibility. He has to lead the way in every attack since then.”

But their tank managed to survive battle after battle where many others were destroyed.  Makos credits Clarence for much of that.

‘We’re a Family Locked in a Sardine Can’

“You see, he knew that he had to shoot first, shoot straight and not miss. Because if he missed, somebody in his crew was going to die,” Makos explained. “And his crew was his family. He used to say, ‘we’re a family locked in a sardine can.’”

Clarence’s tank and others spearheaded a charge into Cologne, Germany near the war’s end.  It was a crucial target as a major gateway city into the German homeland.

At its heart was a huge cathedral dominated by two extremely tall towers. Near it, a German Panzer tank sat hidden, waiting to blast the first unassuming American tank rolling by.

The problem for this particular Panzer tank crew was that they were used to fighting Sherman tanks and had yet to encounter one of the few and new Pershings like Clarence was in. It was built much like the Germans’ Panzer.

A Milli-Second Hesitation that Swung a Battle

The German commander in that hidden tank could hear Clarence’s Pershing approach and was prepared to fire. But then when it rolled into view, the German officer was suddenly confused, thinking maybe the Pershing was a German tank. He hesitated for just a moment, afraid he might blow up one of his own.

That was just long enough for a surprised Clarence to get off the first shot, followed by two more that killed the Panzer.

“Clarence had an advantage that day,” Makos stated. “The German hesitated. A milli-second could be the difference in a battle like that. They say it was like a Western gunfight in the streets of Cologne.”

The Death that Scarred a Warrior for Decades

An American Army cameraman just happened to be nearby and caught this epic duel on film, making it a sensation when the film was shown to Allied audiences.

There was a dark side, though, to this battle that scarred Clarence for the rest of the 20th century.

Just before the Panzer and Pershing had their one-on-one duel, a civilian car raced across the battle zone and both tanks’ crews machine-gunned it, thinking it might be an enemy staff car.

Died Driving into the Battle They Tried to Flee

The driver was killed at the wheel, and the other occupant of the car fatally wounded.

Makos said of this passenger, “Her name was Katharina Esser.  She was just a grocery store clerk. But she was racing through, trying to flee the city of Cologne.”

From his tank, Clarence could see Army medics working to save Katharina’s life and failing.

“It stayed with Clarence for decades,” Makos explained, adding that the tank gunner just tried to stuff down the guilt and anguish across those decades.

From Deadly Enemies to Fast Friends

The author continued, “Eventually he had to talk to somebody. Now, his whole crew had all died by then. Who was left? Just the man he fought against. And so he traveled to Germany and in front of the cathedral in Cologne, he and Gustav Schaefer, the young German tank-gunner, who back then was 18 and who was battling him, they put their arms around each other, and Clarence said ‘The war is over.  We can be friends now.’”

Makos had traveled to Cologne with Clarence for this visit in 2013 and was on hand when the American and German met and began a long visit in the shadow of the cathedral.

He recalled, “Gustav said, ‘here’s where my tank was, here’s where Clarence’s tank was.’”

‘War Was What Took Her Life’

Then they saw where the civilian car had been machine-gunned, killing the driver and Katharina. Clarence learned the Panzer, too, had been shooting at it. He learned maybe it wasn’t his bullets that blasted into Katharina. But more important was what Gustav then said to a guilt-stricken Clarence.

Makos shared, “These men said ‘this is where the mistake happened.’  And Gustav said those beautiful words that would later give Clarence peace. He said ‘Clarence, it’s war. It’s in the nature of it. It can’t be undone. War was what’s responsible. War was what took her life.”

Gustav died not long after, but his words continue to be a balm to the man who’d been his WWII foe, but in the end, he became his fast friend.