US Dept. of Ed. Just Dropped These Restrictions Against Religious Groups 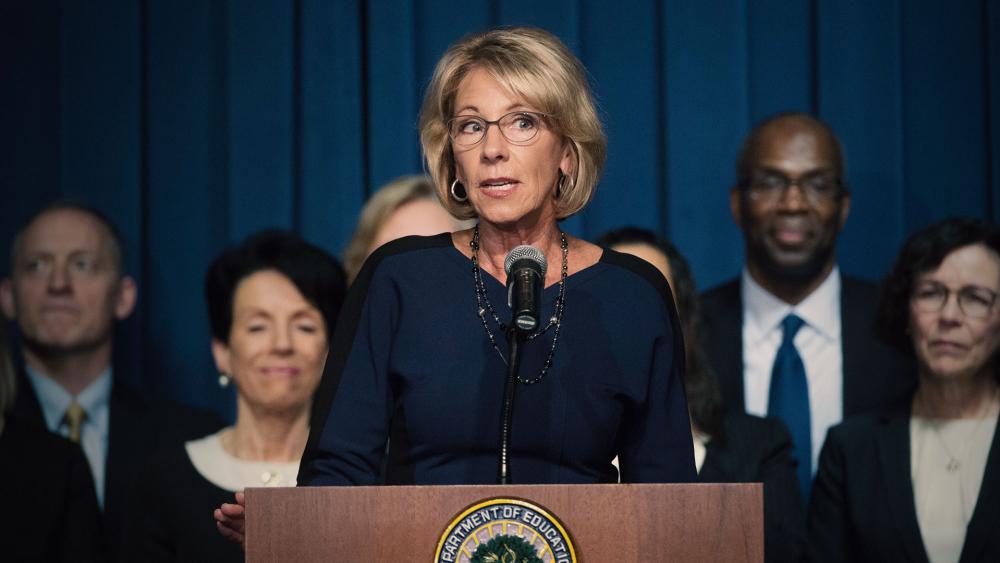 The US Department of Education has announced it will no longer enforce a restriction barring religious organizations from serving as contract providers of services solely due to their religious affiliation.

US Secretary of Education Betsy DeVos made the announcement Monday during the annual meeting of the Council for American Private Education (CAPE) State Directors.

"These provisions run counter to the U.S. Supreme Court decision in Trinity Lutheran Church of Columbia, Inc. v. Comer, 137 S. Ct. 2012 (2017) that, under the Free Exercise Clause of the First Amendment of the U.S. Constitution, otherwise eligible recipients cannot be disqualified from a public benefit solely because of their religious character," the statement explains.

As CBN News reported in 2017, the US Supreme Court ruled 7-2 that the government cannot exclude churches and other faith-based organizations from a secular government program simply because of their religious identity.

The high court made that ruling in the case of Trinity Lutheran Church of Columbia v. Comer, involving a church-run preschool in Missouri. The state had denied the church a partial reimbursement grant for rubberized playground surface material made from recycled tires solely because a church runs the preschool, even though the only purpose of the grant program is to improve children's safety.

According to the Alliance Defending Freedom, although the state highly ranked Trinity Lutheran Child Learning Center as qualified for the program (fifth out of 44 nonprofit applicants), it denied the center's application solely because a church runs the preschool. Children in the community also use the playground after hours and on the weekends, and more than 90 percent of the children who attend the preschool do not attend the church.

"The Trinity Lutheran decision reaffirmed the long-understood intent of the First Amendment to not restrict the free exercise of religion," Secretary DeVos said in a press release. "Those seeking to provide high-quality educational services to students and teachers should not be discriminated against simply based on the religious character of their organization."

ADF Legal Counsel Kellie Fiedorek commended the Department of Education and the Trump administration for its action.

"Religious organizations should be free to compete to provide goods and services to schools and colleges on a level playing field with everyone else. For that reason, we commend the Trump administration and the Department of Education for recognizing the unconstitutional nature of the existing ban on religious contractors who are providing secular services," Fiedorek said in a statement.

"As Secretary DeVos rightly noted, such a ban can't be enforced in light of the U.S. Supreme Court's decision in the ADF case Trinity Lutheran Church of Columbia v. Comer, which found that excluding an organization from a public program solely on the basis of the organization's religious character is 'odious to our Constitution…and cannot stand,'" the statement concluded.