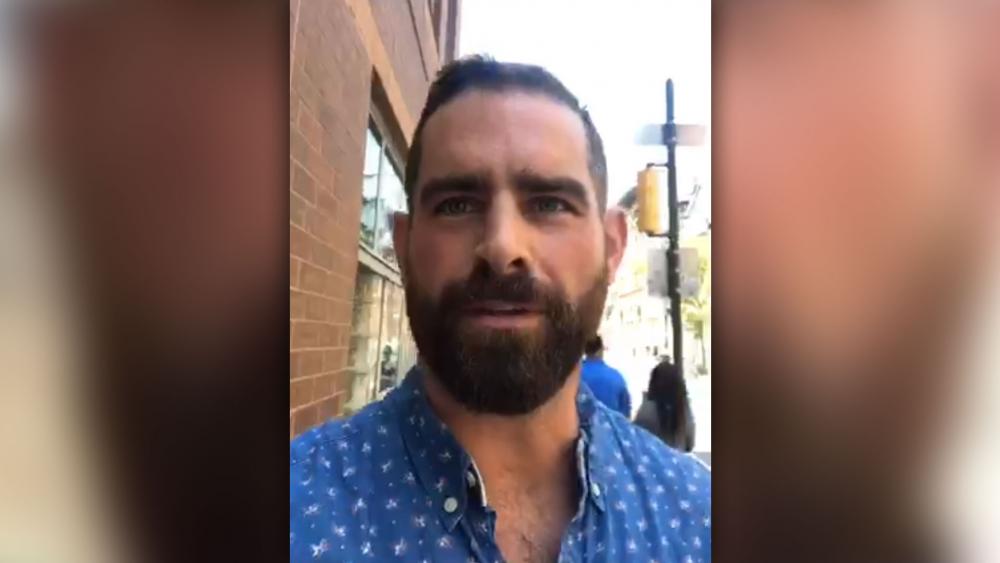 Late last week, State Representative Brian Sims harassed an elderly woman outside of a Planned Parenthood center in southeastern Pennsylvania, videotaping the whole thing and putting it on the internet.

FAITHWIRE: Democrat Rep. Delivers ‘Absolutely Disgusting’ Defense of Abortion: ‘You Kill Them Now or You Kill Them Later’

Sims shared the video four days ago, in which he mocks and belittles the women for eight awkward minutes.

“Push back against Planned Parenthood protestors, PLEASE,” Sims wrote on his Twitter post. “They prey on young women, they use white privilege, & shame. They’re racist, classist, bigots who NEED & DESERVE our righteous opposition. Push back, please.”

The video begins as Sims approaches an older woman standing outside of Planned Parenthood, who is minding her own business.

“Today’s protester, now she is an old white lady who is going to try to avoid showing you her face,” Sims said as he began the video, angling the camera at her.

“But the same laws, luckily, that protect her from being out here also protect me from showing you who she is,” he added. “And so my hope is that you’ll donate $100 for every extra hour that this woman is out here telling people what is right for their bodies.”

“How many children have you clothed today?” Sims said, raising his voice at the woman as she kept turning away from the camera.

“How many children have you put shoes on their feet today? Have you fed any children today or have you just stood out in front of a Planned Parenthood shaming people for something they have a Constitutional right to do?”

Sims again, refers to the woman as an “old lady,” while shoving the camera in her face.

“Who’d have thought that an old lady would be outside a Planned Parenthood telling people what is right for their bodies,” he said. “What you are doing here is disgusting. This is wrong. You have no business being out here.”

Sims continued to harass the woman, telling her that she was allowed to be out in the streets, but that he did too.

“An old white woman telling people what to do with their bodies, shame on you,” he repeated over and over again.

“Shame on you! Shame! Shame! There’s no faith that tells you-you are right and everybody else is wrong,” he said, progressively getting louder. “Don’t convince yourself that what you are doing isn’t extremely racist.”

At one point in the video, the woman asked Sims to get the camera out of her face, to which he replied, “No, No. You have a problem protesting in public, don’t protest in public.”

In his video, Sims states that although the woman has a legal right to protest, she doesn’t have a moral right to protest. According to his worldview, her morality is skewed and wrong, making her protest unworthy.

Throughout the entirety of the video, Sims calls her view ‘disgusting’ and ‘wrong,’ but it’s unclear to what moral standard he is using to determine what makes her opinion, and her protest wrong, while his opinion and his protest against her is right.

He even goes far enough to argue that her protest, and pro-life stance “is a racist act of judgment,” which again asks the question, what is determining his opinion that being pro-life is racist?

“Let’s go protest out in front of her house and tell her what’s right for her body,” he told her.

Time-after-time he points out that the woman is wrong because she is protesting a law that protects citizens.

Yet the argument he used over-and-over again is the same argument that slave owners and later segregationists once used: because slavery was legal, people must not fight against it.

FAITHWIRE: California College Students Could Soon Be Footing the Bill for Classmates’ Abortions

After harassing the woman for over eight minutes, Sims finally cuts the camera back to himself, where he begs viewers to donate to the Planned Parenthood location.

Many people took to Twitter, expressing their disdain for the way that Representative Sims handled the situation.

“What a strong man this guy is,” Jessica Fletcher of the Daily Caller wrote. “Yelling at an elderly woman for progressive brownie points.”

What a strong man this guy is. Yelling at an elderly woman for progressive brownie points. You’re no advocate of women because you support legalized murder. https://t.co/06mAI36r1e

Ryan Saavedra of the Daily Wire pointed out in his tweet that the state rep not only harassed the woman verbally but threatened to show up at her home as well.

Democrat state lawmaker Brian Sims (PA) harasses an elderly woman for her Christian faith, tells her not protest Planned Parenthood in public, calls her racist, asks for her address so he can show up to her home as an elected official and harass her https://t.co/vJPDQz3YwY

“The State Democratic Party should support a primary challenge to Brian Sims,” Tim Carney, an author tweeted. “Get behind a Democrat who doesn’t hate religious people.”

The State Democratic Party should support a primary challenge to Brian Sims. Get behind a Democrat who doesn't hate religious people. https://t.co/o0wPiSqXzy

Representative Sims also took to Twitter to express his opinions on his own video saying, “Bring it, Bible Bullies! You are bigots, sexists, and misogynists and I see right through your fake morals and your broken values.”

Bring it, Bible Bullies! You are bigots, sexists, and misogynists and I see right through your fake morals and your broken values. #BeReal https://t.co/kmDsrQsMmN