Grinding Nor'easter to Churn Along East Coast This Weekend 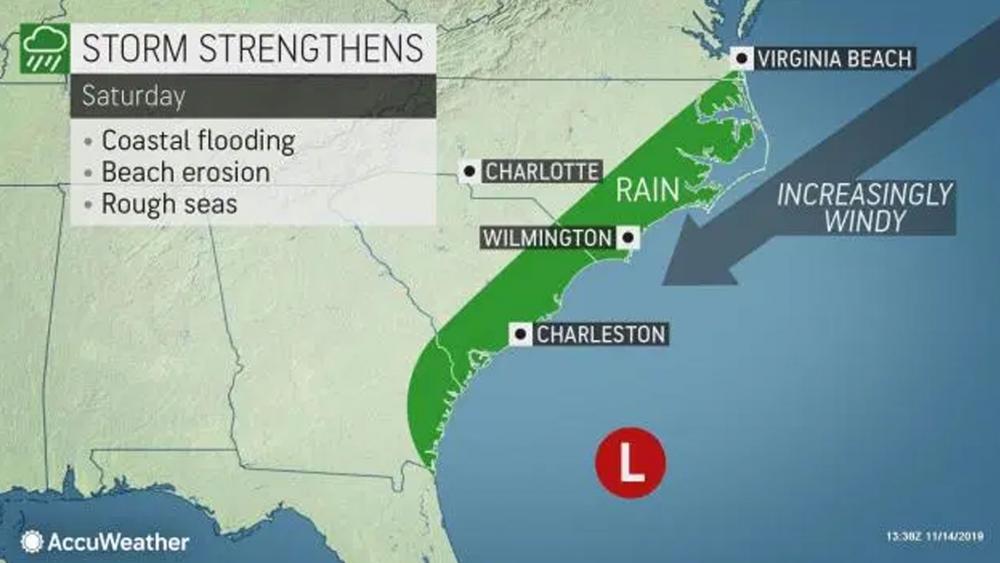 High winds, heavy surf, and drenching rain will pound part of the southern Atlantic coast this weekend, but some impact from a nor'easter will expand to the coastal Northeast later this weekend to early next week.

After spreading rain eastward across the Deep South into Friday, the storm will strengthen along the Carolina coast while pivoting northeastward on Saturday, Sunday, and Monday.

The difference in pressure between the strengthening storm and high pressure over the interior Northeast will create strong winds from the northeast and north.

Then, a second storm will ride quickly on the nor'easter's heels, and it is forecast to take aim farther north and focus on the Northeast next week.

The strongest winds are likely from the Outer Banks of North Carolina to the capes of Virginia, near the mouth of the Chesapeake Bay. In this area, winds are expected to average 25-50 mph with an AccuWeather StormMax™ gust of 65 mph.

Winds of this strength can break tree limbs and cause sporadic power outages.

The persistent strong winds will push ocean, bay and sound water to levels that are likely to cause coastal flooding.

Large waves that build from the persistent winds will be a threat to small craft and lead to beach erosion and may damage roads on the barrier islands, including North Carolina Route 12 which was damaged during Hurricane Dorian.

"The heaviest rain from the storm will fall along the coasts of North and South Carolina, where rainfall is anticipated to average 2-3 inches with an AccuWeather Local StormMax™ of 5 inches," AccuWeather Meteorologist Clay Chaney said.

"While the rain will be beneficial in most areas of the Deep South and along the coast, too much can fall in coastal areas too fast and lead to urban style flooding," Chaney said.

The combination of wind and rain along the Carolina and Virginia coastline will create AccuWeather RealFeel® Temperatures in the upper 30s to the upper 40s.

In contrast, much of the weekend will be dry and sunny across the interior South, including around Birmingham, Alabama; Atlanta; Charlotte, North Carolina; and Roanoke, Virginia.

Impact in mid-Atlantic, southern New England to be less severe, but significant

Enough wind, waves and above-normal tides are in store to cause significant chill, minor coastal flooding and some beach erosion from Maryland and Delaware to New Jersey, southeastern New York state and eastern Massachusetts from the storm.

Strong winds are forecast to create RealFeel Temperatures in the 20s and 30s along the coast much of the time.

Conditions including the risk of some rain will peak from late Saturday night to Sunday night over the Delmarva Peninsula and New Jersey and from Sunday to Monday from southeastern New York state to Massachusetts.

Some areas of eastern Massachusetts, including Boston, could be thoroughly soaked by the storm on Monday before it moves away.

The storm would have to track a couple of hundred miles closer to the upper mid-Atlantic coast for rain and snow to fall over the central Appalachians and northern New England. Instead, these areas are likely to have a sunny, but crisp and cold late-autumn weekend.

Trailing midweek storm may have major impact on Northeast

A second storm will follow the weekend nor'easter and has the potential to track much farther north and could be almost as strong.

Provided the storm tracks a few hundred miles farther north than its predecessor, strong winds, heavy rain and the risk of urban flooding will spread northward over the mid-Atlantic during Tuesday night and New England on Wednesday.

Marginal temperatures may allow wet snow or a mixture of snow, sleet and rain to fall over the central and northern Appalachians.

While impact from the weekend storm may have minimal effects on flights in the Northeast, the midweek storm that follows could trigger numerous airline delay and flight cancellations.

On Wednesday, there is the potential for slow commutes on the roads, especially from Philadelphia to New York City and Boston, depending on the exact track of the storm.

Should the second storm remain weak and track offshore, little wind and only spotty precipitation would occur at midweek in the Northeast.

Download the free AccuWeather app to get the latest updates on the storm and how it might affect your area. Keep checking back on AccuWeather.com and stay tuned to the AccuWeather Network on DirecTV, Frontier and Verizon Fios.