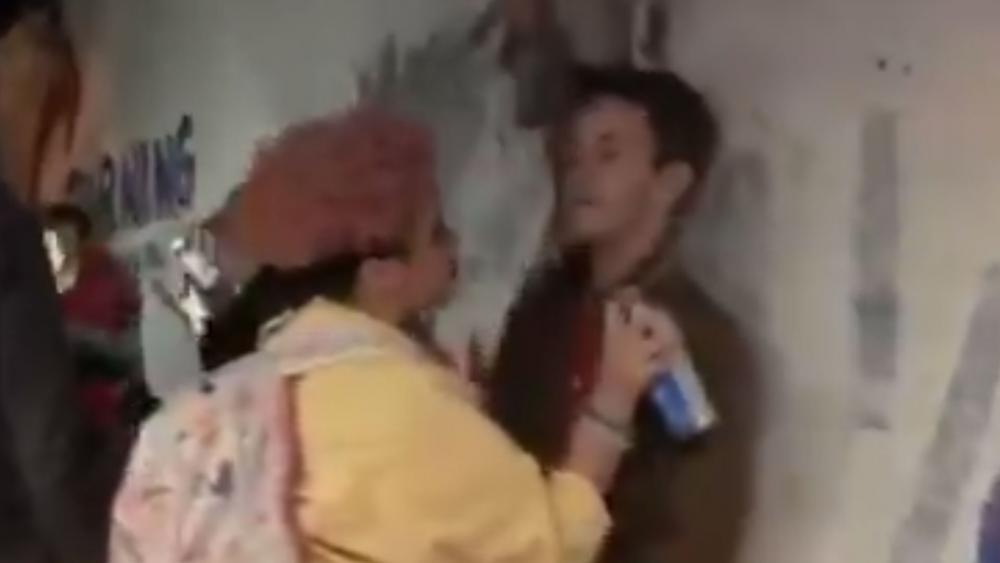 The son of a Republican congressman was targeted and assaulted by a violent gang of socialist and communist thugs at North Carolina State University.

Jack Bishop, a 19-year-old freshman tells the Todd Starnes Show that he was attacked by about two dozen socialists and communists primarily from the Young Democratic Socialists of America.

Click here for a free subscription to weekly Todd’s newsletter: a must-read for Conservatives!

Bishop, who is a member of the Turning Point USA chapter, had been working with other conservative students to paint messages in the university’s expression tunnel promoting an upcoming campus event.

Bishop said the communist students arrived dressed in all black and some were hooded. He said the began to spray paint over the advertisements and got into shoving matches with the conservative kids.

“I had the audacity to stand my ground and two members of this group got in my face and began painting all around me,” Bishop said.

The young freshman said the commie thugs painted his torso and his jacket. Another protester sprayed him in the face and eye.

Young Conservatives were attacked at the Free Expression Tunnel on @NCState’s campus by Young “Democratic” Socialist Group members. They were painting and promoting the Turning Point event tomorrow with @charliekirk11 and @LaraLeaTrump. Then, the true fascist/socialist showed up pic.twitter.com/UcMZI0QwjJ

“I was very disappointed to see the members of YDSA act with such audacity and lack of restraint in attacking members of the opposite side of the aisle simply for disagreeing with them,” Bishop said on my radio show. “I’ve very disheartening to see so many people so determined to censor viewpoints they disagree with.”

Bishop said there is a stigma against conservatives at NC State “and it’s indicative of the left’s attempt to censor conservative thought through intimidation and violence.”

A group called “No Hate at NC State Coalition” sent a message to the Raleigh News & Observer defending their behavior.

“We decided to go and cover it with our own message,” the statement read.

They said Bishop “attempted to prevent students from exercising their First Amendment Rights by jumping in front of several of us while we were spray painting. He intentionally tried to get sprayed to frame it as an assault.”

In other words, the socialist and communist thugs are blaming the victim.

“We cannot allow the left to continue to oppress conservative thought,” Bishop said. “It’s deeply unacceptable to commit violence in the name of political conviction, right or left, and all such behavior should be called out.”

The good news is that Jack Bishop stood his ground and exposed the communist and socialist students for what they truly are – a bunch of jack-booted thugs.

Unfortunately, the university has not done a very good job of protecting free speech on their campus. And they don’t seem to be taking what happened to Bishop seriously.

“I have not heard a word from administration,” he said. “There have been no reassurances that the people involved will be brought to justice or that conservatism is welcome on campus.”

There’s only one way to deal with leftist university officials who are too cowardly to defend free speech – pull their federal funding. And if that doesn’t work, encourage alumni and donors to stop sending cash.

We cannot and we must not tolerate this sort of lawlessness.