ABA Smears Trump Nominee as 'Homophobic', He Replies 'All People Are Created in the Image of God' 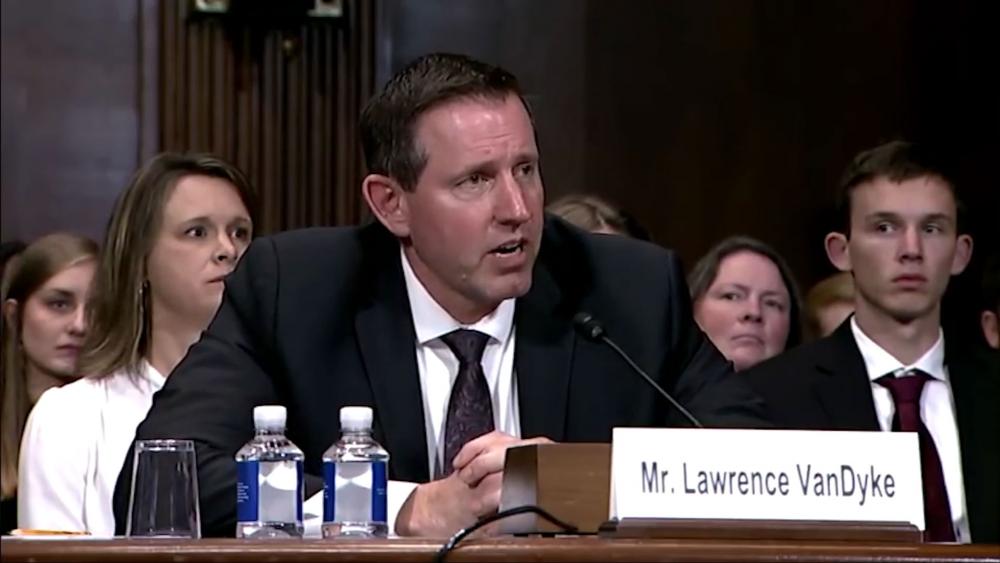 The American Bar Association's (ABA) Federal Judiciary Committee is harshly criticizing one of President Trump's judicial nominees. But his defenders say the ABA is biased against conservatives in general and that the lead evaluator has a clear, personal political history of opposing the nominee.

President Trump nominated Lawrence VanDyke for the Ninth Circuit Court of Appeals. As the former Solicitor General for the states of Nevada and Montana, he has argued more than 20 appeals cases in federal circuit courts.

Nevertheless, the ABA sent a letter to the Senate Judiciary Committee saying the people it interviewed called VanDyke, "arrogant, lazy and an ideologue."

The letter also claimed that VanDyke himself would not say that he would be fair to members of the LGBTQ community. VanDyke broke down, crying before the committee during a hearing on Wednesday.

"Did you say that you would not be fair to members of the LGBTQ community?" Sen. Josh Hawley (R-MO) asked VanDyke.

"Senator that was the part of the letter..." VanDyke answered as he trailed off and began to cry. "No, I did not say that. I do not believe that."

"It is a fundamental belief of mine that all people are created in the image of God and they should all be treated with dignity and respect," he added.

Hawley called the contents of the letter "outrageous allegations" and "hearsay."

Sen. Mike Lee (R-Utah) also spoke out against the ABA, saying its review was biased and called for the association to be considered a special interest group.

The letter "would almost be humorous in an inflammatory way were it not so personal, were it not so unfounded," Lee said. "The ABA has essentially called you a homophobic bigot... with no apparent basis."

In the opinion of his defenders, VanDyke is probably one of the most qualified individuals ever to be considered for the federal bench.

His career resume is also impressive. VanDyke was appointed as Deputy Assistant Attorney General in April 2019. His responsibilities include the supervision of the Department's Natural Resource Section which handles a diverse and extensive docket of primarily defensive litigation involving federal land, resource, and ecosystem management decisions.

Prior to joining the Environment and Natural Resource Division, he served as the State Solicitor General for two western states: Nevada and Montana. As Solicitor, VanDyke litigated and supervised appeals on a broad variety of subjects, including civil and criminal cases in the US Supreme Court and federal and state courts of appeal. He also served as a legal advisor to executive branch officials and litigated priority cases in federal and state trial courts.

In addition to his law degree, VanDyke also holds a Masters in Engineering Management from Montana State University as well as a bachelor's degree in Civil Engineering from the same institution.

In an article posted by the National Review, Carrie Severino, chief counsel and policy director to the Judicial Crisis Network writes, "The ABA has amassed quite the history of bias against conservatives over the last few decades, but with VanDyke, it has really outdone itself."

"Lawrence VanDyke is one of the standout appellate litigators of his generation," she noted.

Severino points out that the ABA should direct their attention to VanDyke's lead evaluator, Marcia Davenport, who she describes as having "a history of opposing VanDyke politically."

"A left-wing partisan who opposed Lawrence VanDyke in Montana led the ABA's evaluation process, interviewing other political foes of VanDyke and — surprise! — found their gripes about his professionalism and temperament to be very credible," Severino added.

She quotes the Code of Judicial Conduct which takes the issue of a judge's impartiality very seriously and compares it with the ABA's lead evaluator of VanDyke.

"Canon 3 states: 'A judge shall disqualify himself or herself in a proceeding in which the judge's impartiality might reasonably be questioned, including but not limited to instances in which . . . the judge has a personal bias or prejudice concerning a party.' Yet the ABA—whose self-professed mission is 'to serve equally our members, our profession and the public by defending liberty and delivering justice as the national representative of the legal profession' — ironically can't recognize the compromised impartiality of VanDyke's lead evaluator."

In an op-ed appearing in the Wall Street Journal on Tuesday, Adam J. White, a resident scholar at the American Enterprise Institute and an assistant professor of law at George Mason University, declares that the ABA's critique of VanDyke is just another smear campaign by the association.

"Political bias is pervasive in much of the ABA's work. Its governing body, the house of delegates, regularly endorses stridently progressive policies, including on abortion, gender identity and economic rights—policy issues on which an association of lawyers has no special expertise," he noted.

"An institution built to educate and improve the legal community has become another progressive political lobby," White continued. "The ABA's leaders are wasting the institution's money, and its reputation, on their own ideological causes. Its members deserve much better. So does the American judiciary."