'Better Than Anything We Could Have Envisioned': Why This Church Hosted a Mass Wedding for 24 Couples 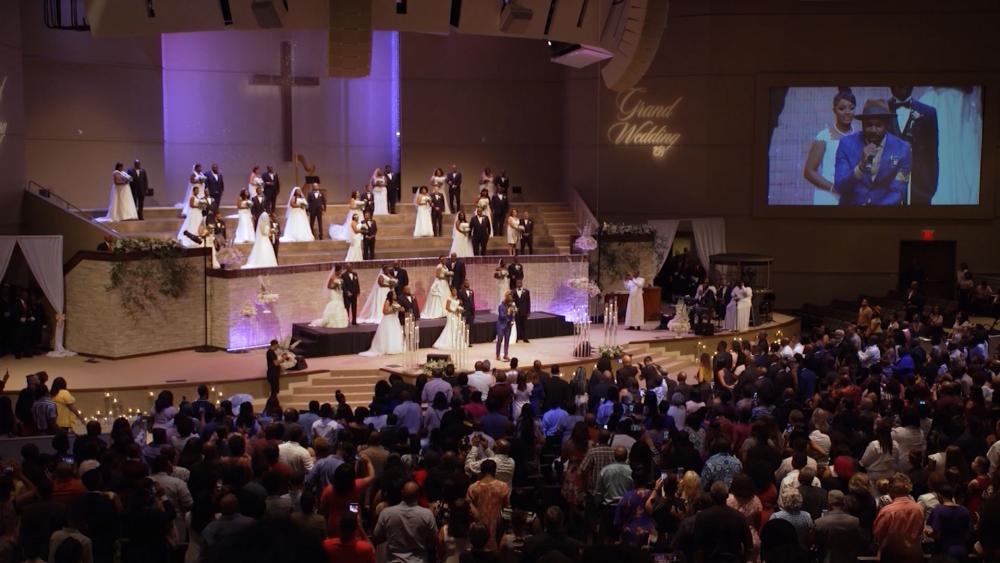 DALLAS, TX – Since 2010, Pastor Bryan Carter of Concord Church in Dallas has been challenging unwed couples who live together to move out or tie the knot. For those who choose to marry, the church throws them a grand wedding, complete with wedding dresses, tuxedos, and even the rings.

24 couples recently walked down the aisle after completing the church's 90-day challenge.

Encouraging Marriage Instead of Cohabitation

"It was all birthed out of us looking around the culture and realizing how popular cohabitation has become and just believing that marriage is the best way, Carter told CBN News. "And so our goal was to help couples to move from cohabitation into the marriage covenant."

It is an issue that hits close to home for Pastor Carter.

"My wife and I lived together before we were married so we know what cohabitation's all about," he explained. "We know how you drift into it. My brother helped me when I was living with my wife, my fiancée, and paid for my rent to be able to step out of that situation. And so we want to help couples because we've been helped."

According to the US Census Bureau, in 2007 14-million unmarried adults lived together. By 2016, that number jumped to 18 million.

One surprise from those numbers is the four million Americans 50 or older choosing this lifestyle. The Pew Research Center found that total is 75 percent higher than in 2007. One reason is the combination of a decline in marriage and the rising divorce rate among aging baby boomers.

That statistic included Howard Randolph and Lowanda Ammons-Randolph, who had been living together for three years. They were engaged and planning to marry later this year but then decided to move up their wedding date after hearing Pastor Carter's challenge.

"It was all I needed to hear that particular Sunday because I felt like at that moment," Lowanda told CBN News. "I looked at Howard like, 'God talking to us, this is us.'"

"As he put the challenge together, I said, 'Hey, we're doing it,'" explained Howard. "And we – separate rooms. We did the challenge. We stuck with the plan."

Couples Explain what Kept Them from the Altar

Vernon Henderson and Trajea Sweat-Henderson had been living together for 15 years. They said many things kept them from the altar.

"Comfort," said Vernon. "Comfortable where I was."

"Life happened," said Trajea. "We had babies. We graduated from college. We're working full-time jobs. We just got caught up in the hustle and bustle and our relationship. We put it on the back burner. We figured we're committed to each other."

"Some of the couples said, 'Listen, 'I've never had this conversation with her or him before,' explained Pastor Carter. "And that's what happens. So many times we become comfortable talking about certain issues and we never dive into deeper issues. And so we've had some great facilitators that made sure that couples had these conversations, had homework they had to do."

The results have been life-changing.

"Learned a ton about each other, about God, and just a Godly marriage," said Trajea.

Vernon added that he learned to communicate more effectively.

"If you're going to be together for the rest of your life, you've got to know how to communicate," he said.

Howard said, "It taught me to become a man of God. I am accountable to her and I'm cherishing her because I cherish God and that's number one in my life, so that's really was an impact for me."

"We also learned how to pray with each other," said Lowanda. "Even though we prayed, but now we know how to do it right."

For Pastor Carter, encouraging marriage is nothing new. This marks the fourth year his church has conducted the challenge followed by the mass wedding.

"Over time, we've married closed to 50 couples. Over these last ten years and about 80 percent of those couples are still married," he said.

Connecting Couples to the Heart of God

In the end, he says his mission is much more than getting couples down the aisle.

"I hope it connects them to the heart of God," Pastor Carter explained. "That God loves them. God has a plan for them. I pray they'll become witnesses to their families, to their friends. I just pray that it really ignites something in them. And that's what God has called us to do."

The newlyweds said they are beyond grateful for the push and support.

"It's awesome," said Kevin Pryor. "Kind of surreal to be honest with you."

His new bride Megan Pryor said, "It's better than anything we could have envisioned, and it exceeded all of our expectations."

"We did it," said the happily married Trajea Henderson. "God did it."