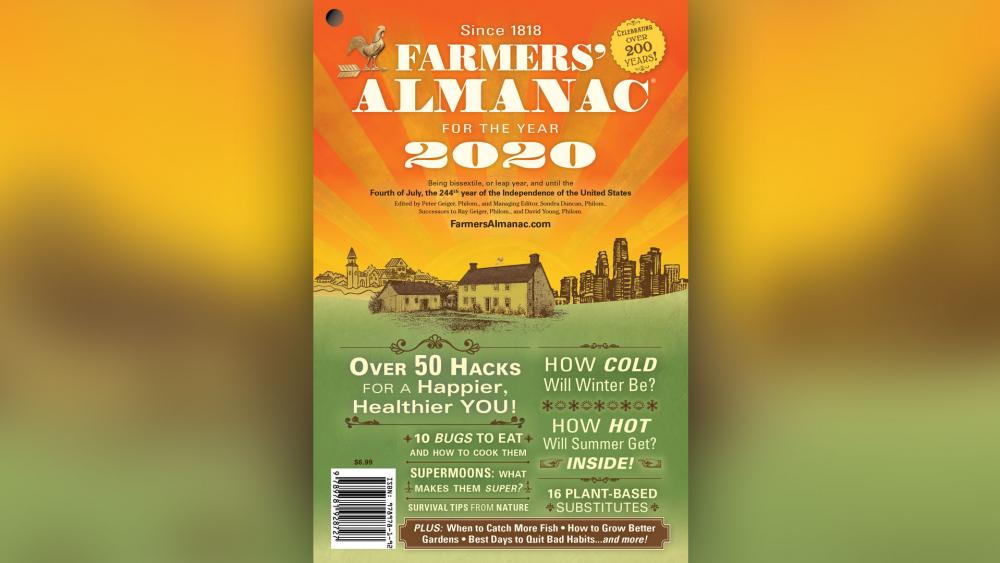 "Everybody talks about the weather, but nobody does anything about it." – Charles Dudley Warner, co-writer of the book The Gilded Age with Mark Twain.

While admitting it doesn't use modern forecasting science in its weather predictions, the just-released Farmers' Almanac for the Year 2020 has given its long-range prognostication for the United States. Their prediction is calling for a "polar coaster" of a winter.

The Almanac predicts another freezing, frigid and frosty winter is in store for two-thirds of the country with the coldest outbreak of the season expected to arrive during the final week of January and last through the beginning of February.

"Last year, the overriding theme was it was going to be teeth-chatteringly cold with a lot of snow," Peter Geiger, the book's editor told CBN News in a recent interview. "For the middle part of the country and for the Great Lakes and for New England, it certainly was that. We didn't say that would be the case for everybody. So we feel we did a good job. We didn't hit everything, but nobody does."

Geiger says this winter's temperatures are going to feel like a "polar coaster."

"For this particular winter, we're using the word 'polar coaster' winter, which means it's going to be up and down, temperatures up and down," Geiger explained. "We're going to earmark for several parts of the country several dates – Jan. 4-7, 12-15, we're saying the middle part of the country – the Plains states, the Great Lakes and probably into New England, the coldest stretch will be the last week of January and the first week of February. We think that spring will be a little delayed. You know this last year in the Northeast, it was almost June until spring came. And this year, we think it will run through about April and then we'll see spring."

Not to be confused with the Old Farmer's Almanac, a different publication, the Farmers' Almanac does not use modern forecasting techniques or technology to make its predictions. Instead, it relies on a mathematical and astronomical formula based on a set of rules for weather forecasting handed down by founder David Young in 1818. Young was a mathematician and an astronomer.

"So he came up with a mathematical formula that he applied to sunspot activity, the planet positions, and the effect the moon has on the earth, and that's what allowed him to predict the weather," Geiger said. "Back in those days, it was for New Jersey, where the Almanac was published. Now it is for the entire country."

Geiger explained the weather predictions are made two years in advance.

"In 203 years, there have only been seven prognosticators," he noted. "Each person uses the formula and then makes adjustments for the growth of the country. We make our predictions or our forecasts two years in advance and we break the country down into regions. There are seven regions. And we break it down into three-day weather segments."

Before you roll your eyes and say to yourself "Fake News," keep in mind that even with today's technology, it's difficult for meteorologists to predict long-range weather patterns.

The Almanac's long-range forecast is similar to the one given by meteorologist Joe Bastardi, the chief long-range forecaster at WeatherBell Analytics, who's also predicting a cold winter over much of the eastern two-thirds of the country.

The National Oceanic and Atmospheric Administration's official winter seasonal outlook will be released in October.

"We try to be a tool that people can use for weather but if you are looking long-range to plan a vacation or a wedding for next summer, I think that's where we're helpful," Geiger told CBN News.

Life 'Hacks' Everyone Can Try

Weather is just a small part of the 200-page book. From cover to cover, it's filled with how-to's, life hacks, and interesting fun facts.

"The fun part of the Almanac I enjoy is the life hacks section," Geiger added. "They used to be called 'hints', but now they are called 'hacks'."

The book's editor gave CBN News a few examples of life hacks anyone can try.

"We have something new about bananas this year," he said. "You eat your banana, then you take the peel and actually polish your shoes with it. You can also put it on bug bites as well."

Just like the pioneers used to do it, the Almanac reminds folks how to make their own products at home.

"Pickles for one example," he continued. "Once you eat your dill pickles, you can actually take a swig of the pickle juice and it helps relieve pains in your legs, charlyhorses.  You can use pickle juice for all types of things. It's like a hydrant, like a health drink. So you take a swig of it after a workout, it actually re-hydrates you. "

With a nod to the recent rise of Americans who have given up meat in their diets, one of the featured articles is How to (Easily Move) to a More Plant-Based Diet.

"We have a fun article on a bunch of 'firsts'. The first electric car was designed 130 years ago.  In 1907, there were 69 different electric cars being made at the time and it was outselling gas cars 10 to 1. We have the first recorded sighting of a UFO. First 9-1-1 call. A whole bunch of 'firsts' that are just interesting."

"The Sweet Side of History" also takes a look at popular desserts from the past 200 years.

The Farmers Almanac is now available at newsstands everywhere. It's also available at FarmersAlmanac.com where you can order a print version or download the new edition.

You can also sign up for the Almanac's newsletter and check out the weather forecasts by region. In addition, there are also tips for fishermen, gardeners, amateur astronomers, and your daily health.