Worst of Humberto to Steer East of Bahamas, US But Surf May be Dangerous 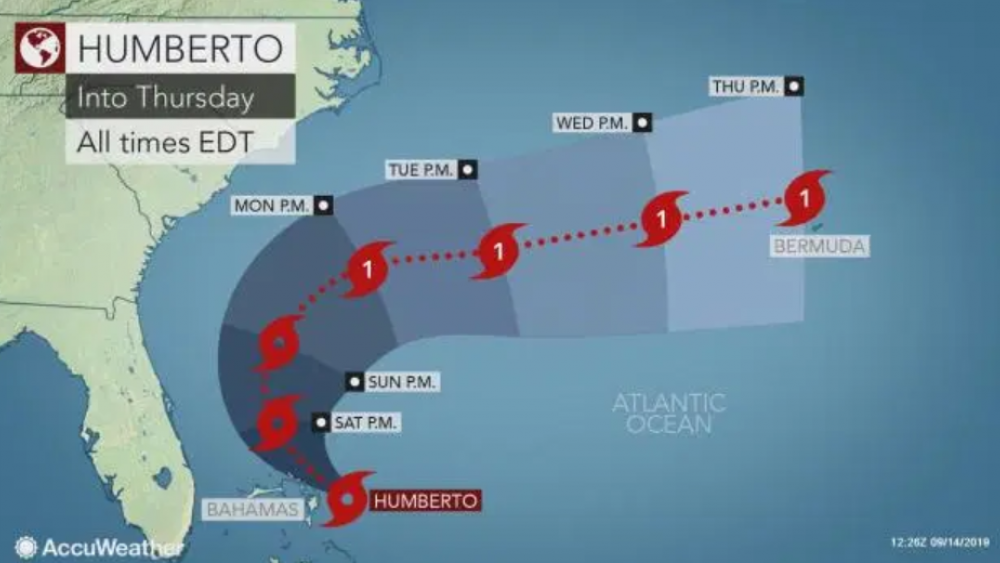 Since Humberto formed so far to the east, impact on the Bahamas and the United States will be minuscule when compared to that of Dorian.

As of 7:00 a.m. EDT, Saturday, Tropical Storm Humberto was located about 70 miles east of Great Abaco Island, Bahamas, and was moving toward the northwest at 7 mph. Maximum sustained winds were near 40 mph with higher gusts.

AccWeather meteorologists expect Humberto to take a sharp curved path to the northwest, north and then the northeast in the coming days, which will keep the center northeast of the Bahamas and well to the east of Florida and south of Georgia and the Carolinas.

The majority of the showers, thunderstorms and strongest winds associated with Humberto are skewed to the north and east of the center.

While some downpours and winds will wrap around to the west and south over time, this means that flooding rainfall is much less likely or will be much more isolated than a direct strike on the central and northern islands of the Bahamas.

While Humberto will gain some strength this weekend, that process will be slow enough so that the northern Bahamas should not experience hurricane-force winds.

As a result of the anticipated winds and rainfall, the AccuWeather RealImpact™ Scale is less than one for the northern Bahamas.

People over the central and northern Bahamas should still expect an uptick in squalls, which can bring brief downpours and strong wind gusts to tropical storm-force into Sunday.

This is especially the case on the Dorian-ravaged islands of Abaco and Grand Bahama, where many are without shelter and recovery operations are in the early stages.

How Will Humberto Impact the US?

Since Humberto has a broad circulation, stiff onshore winds will affect the Florida coast on Saturday and some gusty squalls will spiral ashore.

Farther north from Georgia to the southeastern Carolina coast, winds will parallel the shoreline, but some gusty squalls can brush beach communities through this weekend. An isolated waterspout cannot be ruled-out.

The main threat from Humberto on the U.S. will be for rough surf, frequent and dangerous rip currents and rough seas outside of the Intercoastal Waterway into early next week.

Away from refreshing winds along the immediate coast, the Southeast will remain in a hot and humid, late-summer weather pattern this weekend. However, some cooler and less humid air may be drawn southward along the Eastern seaboard and the Appalachians assisted by Humberto's distant circulation by midweek.

At some point, a non-tropical storm may attempt to pull Humberto closer to the Atlantic coast of the U.S. later next week, but the system may never get closer than a few hundred miles to Cape Cod, Massachusetts.

Humberto Likely to Pass Near Bermuda

Humberto may be a threat to Bermuda as a hurricane and possibly a major hurricane from Wednesday to Thursday.

Any shift in the storm track into early next week can affect the path of Humberto by a hundred miles or more as the storm passes near Bermuda. However, interests on the islands should review their plan of action for a hurricane at this early stage.

Seas will build around Bermuda beginning early this week. Even if the Humberto only delivers a glancing blow to the islands, an uptick in showers, thunderstorms and winds are likely from Wednesday and Thursday. How severe these conditions become and the potential for coastal flooding and battering waves will depend on the exact track and strength of Humberto.

Could Humberto Swing Toward Atlantic Canada?

As far as any impact on southeastern Canada from Humberto next weekend, it is too early to say with any confidence. However, the risk is lower than it was from this past week since Humberto formed farther to the east in the first place.

Meanwhile, as far as any other immediate tropical threats on the U.S. the non-tropical storm over the Gulf of Mexico, which played a role in limiting Humberto's formation and path early on, has the potential to transform to a tropical system before drifting onshore along the Texas coast on Monday or Tuesday.

There are other areas over the tropical Atlantic being monitored for development as well.