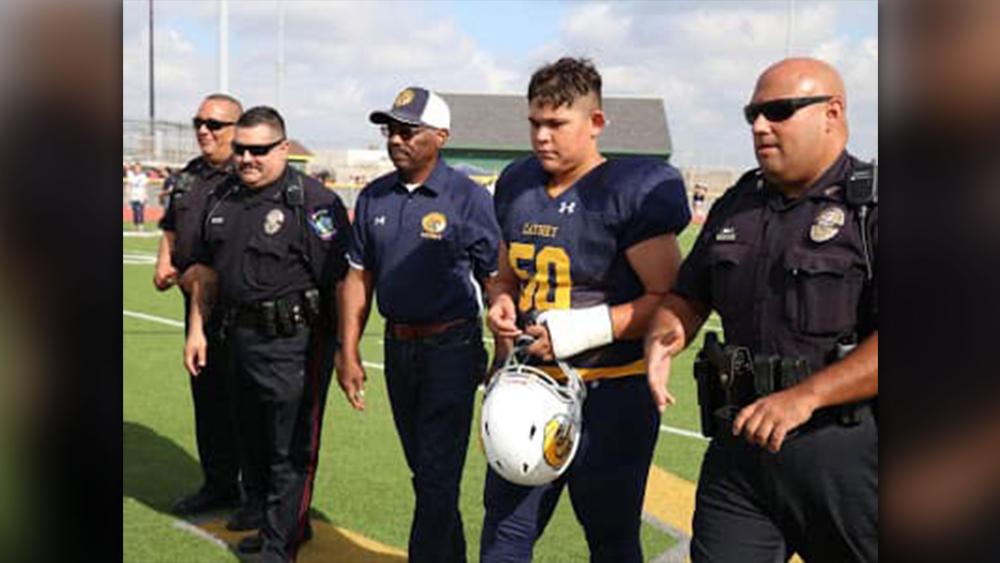 Members of law enforcement from across the state of Texas came out to support 13-year-old Joaquin Espericueta at his first football game.

Joaquin's father, Corporal Jose "Speedy" Espericueta was killed in the line of duty on June 20. He was a 13-year veteran of the Mission Police Department in Texas, according to KGBT-TV.

Before his death, Espericueta asked his friends to take care of his family if anything should happen to him.

Seeing our community and law enforcement agencies come together for the procession in honor of Cpl. Espericueta lifted our hearts. The motorcade was miles long and hundreds of people showed up to honor Speedy. #ThisIsForSpeedy #MissionMourns pic.twitter.com/8dlVYx59jt

"We made a promise to the family that we're gonna be there for special events," said fellow officer Javier Lara.

Law Enforcement Today said Lara organized the event to make sure everyone knew about the game.

"Nobody hesitated on showing up. Everybody was willing to go ahead and come out," Lara said. "Just to let him know that we're going to be there for the rest of his life."

On Saturday, law enforcement officers from all over the state could be seen sitting in the bleachers, cheering for Joaquin.

Mission officers vowed to take care of Cpl. Espericueta's family. They kept that promise as they showed up for Joaquin's 1st football game. Speedy's son was named honorary capt. So many officers & city leaders were there to support! #ThisIsForSpeedy pic.twitter.com/Mg6fPzp9kY

The support of so many people made the game even more memorable for the teen and his family.

Joaquin played a great game, helping to lead his team to their first season victory.

"He was really excited. He was real thankful about us being here for him," Lara said. "He has a huge heart. He's going to be a good young man."

"This would have been Speedy's place, to be here with his son, Chief Dominguez said.

"He loved his job. He was one of the good guys, he had a passion for it. He was a man who put on his vest and the badge with pride every day. He was committed to his job and to his family."