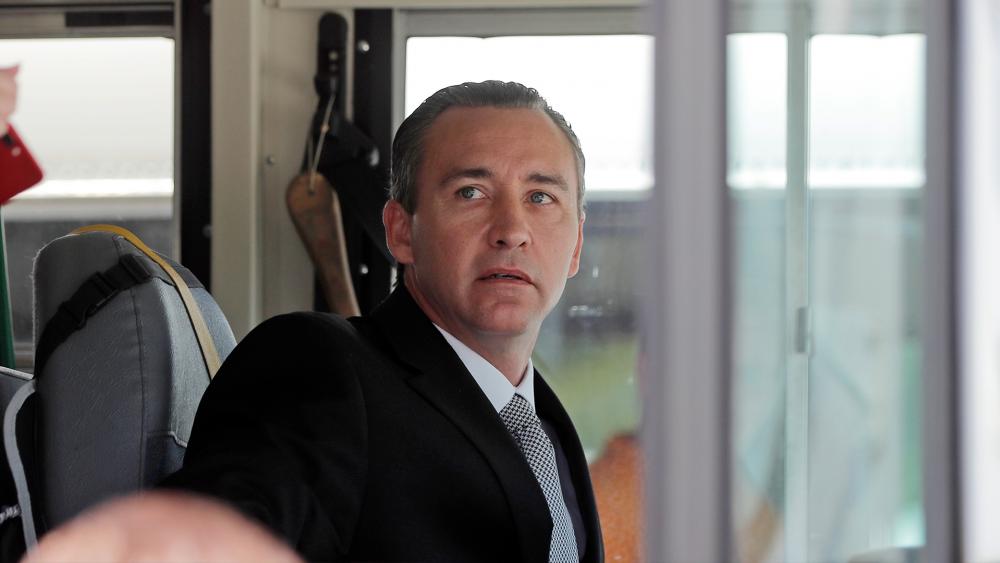 Tony Spell, pastor of the Life Tabernacle Church, sits in the drivers seat of one of his church buses as he prepares to leave the East Baton Rouge Parish jail after posting bond in Baton Rouge, La., April 21, 2020. (AP Photo/Gerald Herbert)

Last week, one Central, Louisiana, pastor was placed on house arrest and fitted for a tracking device after refusing to suspend in-person worship services during the coronavirus pandemic, which has seen most churches around the country transition to internet-based gathering on Sunday mornings.

Tony Spell, who leads Life Tabernacle Church, held a worship service while wearing an ankle monitor Sunday, despite having been placed under house arrest, according to WAFB-TV.

On Friday, District Judge Fred Crifasi asked Spell to comply with state orders limiting the number of people who can gather in one place at the same time. In response, the pastor referenced an unreported Bible passage, said East Baton Rouge Parish District Attorney Hillar Moore.

This isn’t the first time Spell has been in the news.

Police in Central, near Baton Rouge, issued a warrant against the Pentecostal preacher last Monday, accusing him of quickly reversing a large church bus, nearly hitting a protester. Spell was soon thereafter taken into custody and transported to East Baton Rouge Parish Prison.

The pastor’s attorney, Joseph Long, told NBC News it was not his client’s intention to hit the nearby protester.

Spell was nevertheless charged with “aggravated assault” and “improper backing.” The Central Police Department noted the pastor “was also a fugitive with outstanding traffic warrants in the city of Zachary and East Baton Rouge Parish.”

Speaking for himself, the minister admitted in an interview with a local news station that he was, in fact, driving the church bus and wanted to get out to confront the protester, though his wife ultimately convinced him otherwise, CBS News reported.

Here is video of the incident:

“A fair viewing of the video will prove that Spell did not attempt to run over the protester,” said Long, “and the protester did not feel threatened, as he never moved when the bus came near.”

It should be noted, though, that the protester, Tony Bennett, felt differently about the encounter.

He told the Associated Press he was “shocked” by what he described as an “attack.” As for why he didn’t move, Bennett said he didn’t “fully realize” what was happening until Spell abruptly stopped the bus.

Bennett said he plans to continue protesting the church “until quarantine is lifted or [Spell] closes his doors.”

In a text message to a Washington Post reporter, Spell said last Monday he does not intend to surrender, adding police will have to come take him from his church’s sanctuary.

In addition to facing intense scrutiny for continuing to host large church services, Spell has asked his congregation to donate their stimulus checks to pastors and evangelists who “haven’t had an offering in a month,” according to The Christian Post.

Spell went on to say the restrictions on physical gatherings is not about safety. Instead, the bans are “politically motivated” and are part of an orchestrated “attack on all Christians across the world,” he claimed.

The Louisiana pastor appeared on Dr. Phil’s show in March when he told the TV host that such orders are a form of “persecution of the faith.”

“We feel that we are as an essential part of our community as the retail stores,” Spell explained. “It is in persecution of the faith for us to be asked to close our doors whenever more people are being contacted in those Targets and Walmarts than are in my service.”