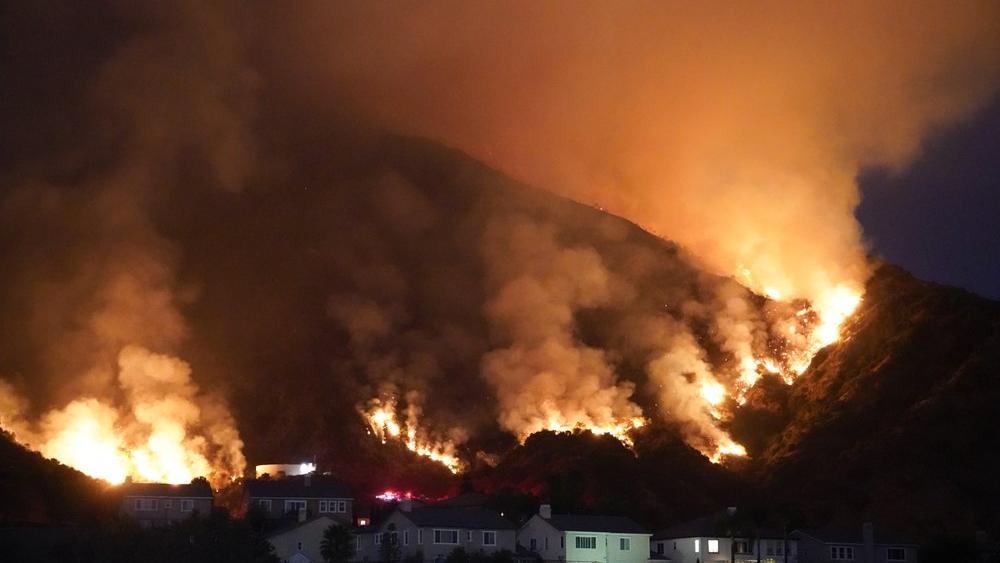 A huge forest fire that prompted evacuations north of Los Angeles flared up Friday afternoon, sending up an enormous cloud of smoke as it headed down to the desert floor and the California aqueduct in the Antelope Valley. Fire crews managed to stop its movement there but additional evacuations were ordered for the western Antelope Valley.

The so-called Lake Fire was just 12% contained, and after threatening more than 5,400 homes, it had charred more than 27.3 square miles (70.7 square kilometers) of brush and trees. Fire officials said 21 buildings had been destroyed, including at least five homes.

The blaze was in the Angeles National Forest near Lake Hughes, north of Los Angeles.

Firefighters were struggling in steep, rugged terrain amid scorching temperatures. The high hit 100 degrees (38 Celsius) Friday in the area and the forecast called for continuing hot, dry weather with dangerous fire conditions because of possible gusty winds.

“The heat, the weather, that’s what made this fire go,” Nathan Judy of the U.S. Forest Service told KABC-TV.

Record-breaking heat is possible through the weekend, with triple-digit temperatures and unhealthy air predicted for many parts of the state. There also was a chance of isolated thunderstorms worsening the fire threat by creating dry lightning and strong downdrafts, fire officials said.

Preliminary damage assessments found that at least five buildings burned in, but authorities said they believed more had been damaged or destroyed.

MORE STORIES ON THE CALIFORNIA WILDFIRE:

There was no containment of a blaze that blackened foothills above the Los Angeles suburb of Azusa. It churned through 2.3 square miles (5.96 square kilometers) of brush on Thursday and was moving away from homes. Evacuation orders issued to residents were lifted early Friday.

Azusa police said they were looking for a homeless man suspected of starting the fire. He was identified as Osmin Palencia, 36, and was last known to be living in a riverbed encampment near the site where the fire started.

Police said Palencia was believed to be violent and urged people to use caution if they see him.

Another blaze came dangerously close to a neighborhood in the city of Corona, east of Los Angeles before crews controlled it. And a Northern California fire in the community of Sloughhouse, near Sacramento, burned about 500 acres (202 hectares) before firefighters stopped its forward spread.