Dismantling America's Most Controversial Avenue, One Monument at a Time 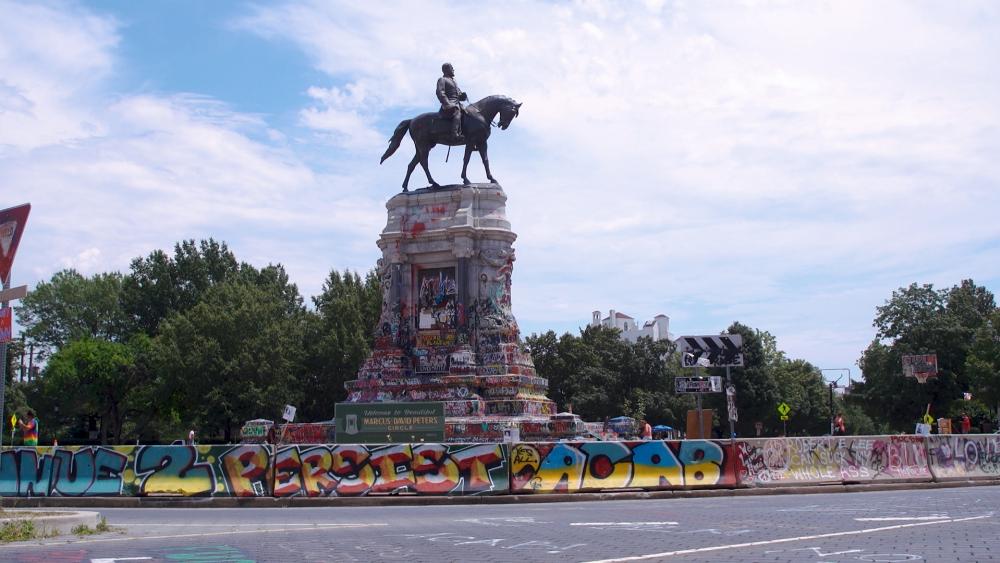 6183299787001
Dismantling America's Most Controversial Avenue, One Monument at a Time

RICHMOND, VA – Richmond's Monument Avenue has arguably become one of the most controversial streets in America. It was lined with confederate statues until massive protests in the wake of George Floyd's death led to most of them being removed.

While protests have quieted down considerably, tensions remain high in the former capital of the confederacy. Pedestals that once held statues of confederate leaders are now covered in graffiti.

In the midst of the pandemic, crowds poured into the streets, defacing and dismantling the statues. In July, Richmond Mayor Levar Stoney used his executive power to remove many of them.

"I've given this order for two reasons," Stoney said. "First as a matter of public safety. The second reason I act today is because it is past time. As the capital city of Virginia, we have needed to turn this page for decades and today we will."

"It is significant in that it's like your voice is finally being heard," said Pastor Emanuel Harris, President of the Baptist Ministers Conference of Richmond Vicinity.

Harris says these times are leading the black church to reinvent itself in some ways.

"I really think in this season the black church is trying to find its role because many moments in the past were church-led," Harris said.

"The civil rights era, especially in the black community was church led. If you look at a lot of these modern protests, the preachers may be in them but they're not at the forefront. In this day and age, the preacher is not the expert in everything. I think as ministers we have to be comfortable creating a stage and not so much being on stage."

The Robert E. Lee monument was the first and largest one to be erected along Monument Avenue. Ironically, it is the last one standing after the others have been taken down.

The Lee Monument was built in 1890, then similar tributes popped up including those to confederate generals JEB Stuart, Stonewall Jackson, and Confederate President Jefferson Davis. All of them are signature pieces in what became an exclusive neighborhood for the white elite.

In nearby Monroe Park, the statue of confederate general Williams Carter Wickham was installed in 1891. Protestors took matters into their own hands, toppling that one back in June.

To prevent more mob take-downs, city workers removed the others per the mayor's order while Lee's statue remained.

"So, I am directing the department of general services to remove the statue of Robert E. Lee as soon as possible," said Virginia Governor Ralph Northam (D).

It would be easier said than done as it's the only statue on state property. The removal of the Lee monument remains entangled in legal red tape as some challenge the governor's decision.

"In 2020 we can no longer honor a system that was based on the buying and selling of enslaved people," Northam said. "It was wrong then and it is wrong now."

"So you can tear down a statue, but it doesn't mean that policies, practices, institutions that perpetuate racism have been torn down," Harris said.

"And to tear those down would take much, much more time. This is a marathon not a sprint for those of us who understand that the level and the layers of society and systemic racism that exist in our culture."

CBN News asked Pastor Harris if he believes God is pleased by the statues coming down.

The only statue addition to monument avenue after the age of the Confederate shrines came just 24 years ago, to a very different figure. Arthur Ashe, a world-renowned African-American tennis pro and son of Richmond. It too was vandalized to some degree during the protests, but it still stands.