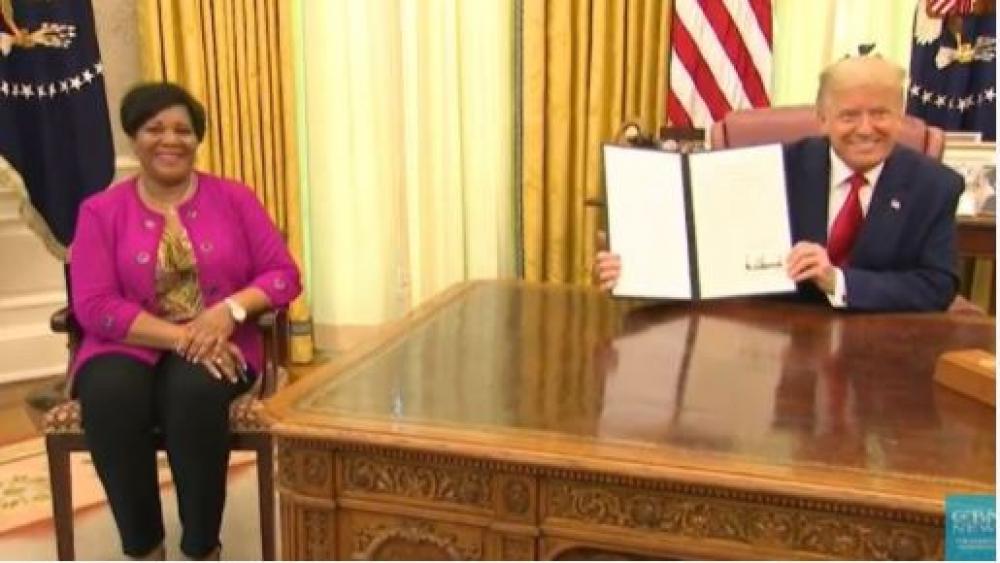 ABOVE: Listen as Pastor Robert Jeffress of the First Baptist Church of Dallas prays in the Oval Office for Alice Johnson and President Trump.

President Donald Trump granted a full pardon on Friday to Alice Johnson, the 65-year-old Memphis woman whose prison sentence he commuted in 2018.

The president said he asked if it would be possible to bring Johnson to the White House Friday in order to give the pardon, which Trump described as “the ultimate thing that can happen.”

Prior to her prison commutation, Johnson was serving a life sentence for a non-violent drug offense. Trump stepped in to release Johnson from prison after her case was brought to his attention by reality TV star Kim Kardashian, who visited the White House to advocate on Johnson’s behalf.

Trump praised Johnson for all the work she has done toward prison reform.

During her speech at the Republican National Convention Thursday night, Johnson praised Trump and invoked her Christian faith.

“I never stopped fighting for my freedom,” she said. “My Christian faith and the prayers of so many kept hope alive. When President Trump heard about me, about the injustice of my story, he saw me as a person. He had compassion, and he acted.”

Faithwire: ‘Kim Did Not Do This For Publicity, But I Had to Share It’: Kim Kardashian Is Paying Former Inmate’s Rent for Next Five Years

“Free in body thanks to President Trump, but free in mind thanks to the Almighty God,” she continued. “I couldn’t believe it: I always remembered that God knew my name, even in my darkest hour. But I never thought a president would.”