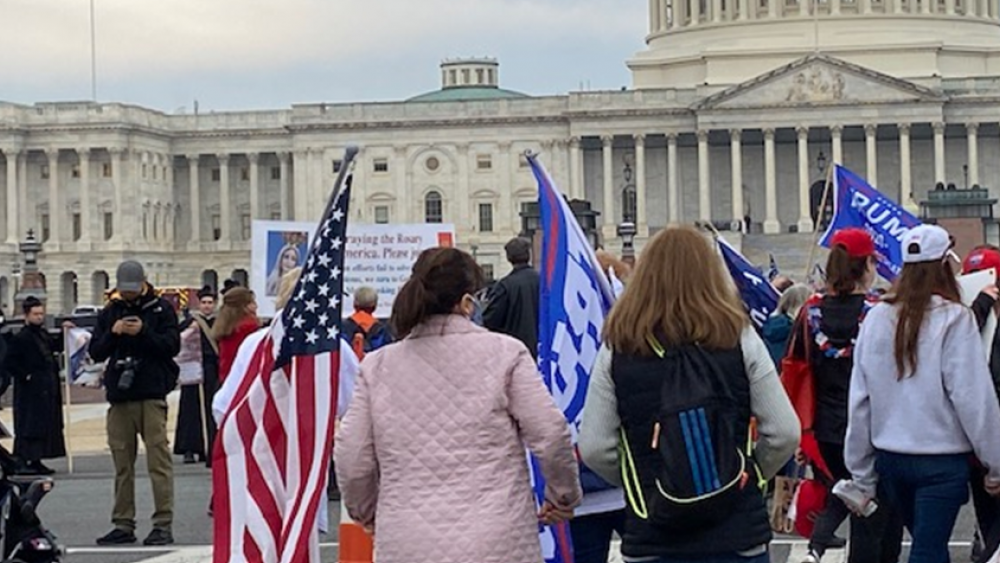 A peaceful protest and prayer march took place in Washington, DC Saturday where participants rallied for America's election system to be free from fraud and corruption.

People of faith marched before gathering at 11:00 a.m. on the National Mall for the "Let the Church ROAR!" Prayer Rally where they heard from guest speakers such as Lt. General Mike Flynn, Pastor Jonathan Cahn, Rev. Kevin Jessip, Author Eric Metaxas, CEO of My Pillow Mike Lindell, and many more.  General Flynn spoke at Noon followed by Rev. Jessip at 1:15 p.m. and Pastor Cahn at 3:30 p.m.

BELOW: Watch speech by General Flynn and President Trump's flyover of the event (enlarge the video for player controls):

The "Jericho March" also hosted a special prayer event where participants marched around the US Capitol, Supreme Court, and the Department of Justice. Since Nov. 5th, Jericho Marchers have been fasting, praying, and marching daily around their state capitols, praying for a fair and transparent election.

“We are Joshuas.  And we need the sound of praise to bring down the walls of the Swamp,” Knoxville, Tennessee’s Julia Bithorn told CBN News as she and her sister Susan Rolls passed by the Supreme Court.

Just a handful of the MASSIVE crowd of patriots gathered in DC today to support @realDonaldTrump⁩ pic.twitter.com/xiDxrJ7APV

Al Crider of Siloam Springs, Arkansas said as he marched, “We want America to remain free, as it always has been.”

But some marchers despair of politicians or justices doing anything to correct corruption in the election system.

“Man cannot accomplish this,” Susan Rolls told CBN News. “Look at what we’ve created.  We have allowed this to happen. So, without God, it is impossible."

But her sister Julia pointed out, “If man can do it, why do we need God?”

And Susan declared, “He is going to win the battle.”

“This is not gloom and doom. This is the Glory of God being revealed,” Julia insisted. “We’ve come here to bind the enemy in the name of Jesus.”

The march was centered around Joshua 6 where God gives specific instructions on how the corrupt city of Jericho is to be conquered.

"But the Lord said to Joshua, 'See, I have handed Jericho over to you, with its king and the valiant warriors. And you shall march around the city, all the men of war circling the city once.'"

Amid allegations of voter fraud during this year's presidential election, Americans are urging government leaders to step up and ensure the fairness of elections. Supporters from "Every Legal Vote" and "Stop the Steal" were sponsoring Saturday's events in an effort to seek God's intervention to verify the integrity of the vote.

President Donald Trump tweeted Saturday morning, "Wow! Thousands of people forming in Washington (D.C.) for Stop the Steal. Didn’t know about this, but I’ll be seeing them! #MAGA."

Wow! Thousands of people forming in Washington (D.C.) for Stop the Steal. Didn’t know about this, but I’ll be seeing them! #MAGA

Groups say they will continue to peacefully protest for election integrity until the Electoral College votes on Dec 14.