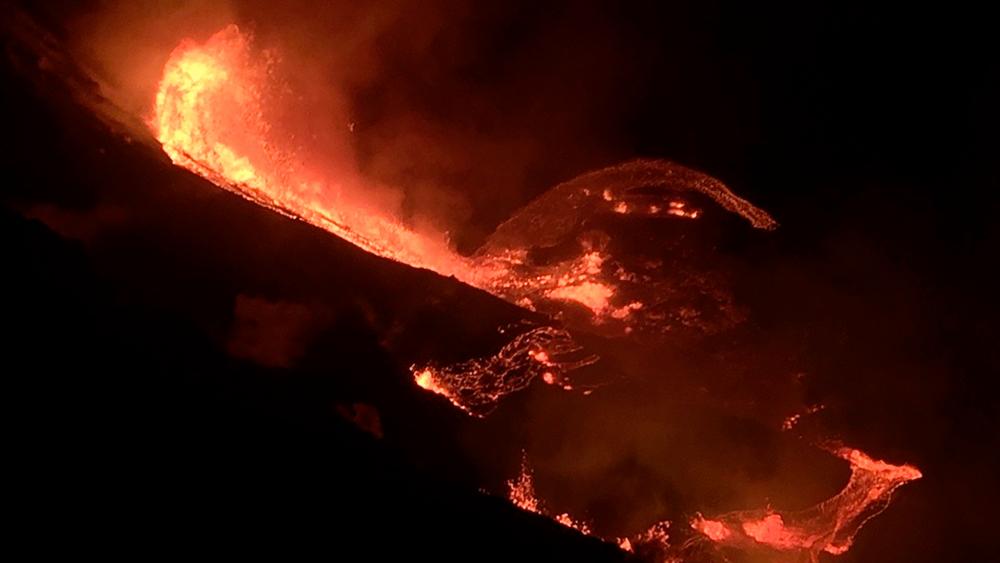 HONOLULU (AP) - Hawaii's Kilauea volcano on the Big Island erupted and shot a steam and ash cloud into the atmosphere that lasted about an hour, an official with the National Weather Service said early Monday.

The eruption began late Sunday within Kilauea's summit crater, the U.S. Geological Survey said. The crater, named Halemaumau, is located within Hawaii Volcanoes National Park and was home to a longstanding lava lake that was present for years before a 2018 eruption caused it to drain.

Tom Birchard, a senior forecaster with the National Weather Service in Hawaii, said lava interacted with a pool of water that had accumulated inside the crater, leading to a short-lived but fairly vigorous eruption.

When lava interacts with water it can cause explosive reactions.

All the water evaporated out of the lake and a steam cloud shot up about 30,000 feet (9 kilometers) into the atmosphere, Birchard said.

The water was the first ever recorded in the summit crater of Kilauea volcano.

In 2019, after a week of questions about a mysterious green patch at the bottom of the volcano’s crater, researchers confirmed the presence of water. The lake had continued to fill since then.

An advisory was issued by the National Weather Service in Honolulu, warning of fallen ash from the volcano. Excessive exposure to ash is an eye and respiratory irritant, it said. The agency later said the eruption was easing and a “low-level steam cloud” was lingering in the area.

By 1 a.m., USGS officials told Hawaii News Now that there were reported lava fountains shooting about 165 feet (50 meters) into the sky.

"We will send out further notifications on Kilauea and other Hawaiian volcanoes as we observe changes,” he said.

A magnitude 4.4 earthquake hit about an hour after the volcano began erupting.

The USGS said it received more than 500 reports of people who felt the earthquake but significant damage to buildings or structures was not expected.

Kilauea last erupted in 2018, destroying more than 700 homes and spewing enough lava to fill 320,000 Olympic-sized swimming pools. An area more than half the size of Manhattan was buried in up to 80 feet (24 meters) of now-hardened lava. The lava flowed over the course of four months.

The 2018 eruption occurred along a rift zone on the volcano's flank where many residential neighborhoods had been developed. Last night's eruption was contained to the summit caldera within the national park.

The volcano had not erupted since 2018 but before then had active lava flows for more than three decades. Kilauea is one of the most active volcanoes on earth.