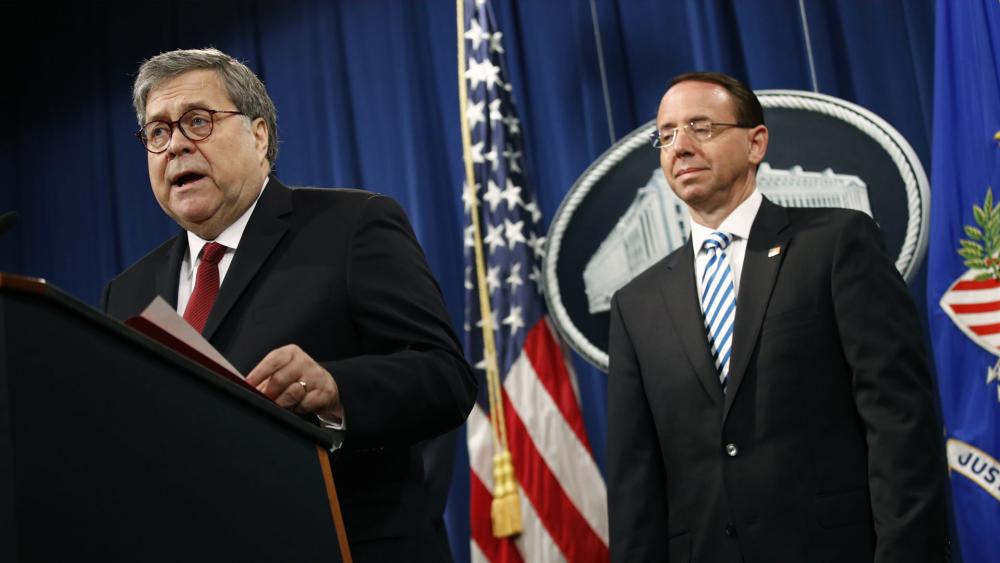 The US Justice Department turned up the legal pressure Monday on two local governments over "sanctuary" policies that interfere with federal immigration officers performing their duties.

The department announced it is suing the state of New Jersey and King County, Washington, over their policies of protecting people living in the US illegally.

The New Jersey lawsuit claims the policies break federal laws by keeping state and local officers from sharing information about inmates that may be in the US illegally. King County, WA, is being sued for not allowing the Department of Homeland Security to use the King County International Airport-Boeing Field for deportation flights.

"Today is a significant escalation in the federal government's effort to confront the resistance of sanctuary cities," Attorney General William Barr told an audience of officers at the National Sheriffs' Association to roaring applause.

The attorney general said the Justice Department would be "robustly supporting" Homeland Security to use "all lawful means," including federal subpoenas, to obtain information about suspects they are seeking to deport.

"These policies are textbook examples of misguided ideology triumphing over commonsense law enforcement, and it is the public and the police who pay the price," Barr said.

The battle between sanctuary cities and the federal government has escalated in the last couple of years. In 2017, then-Attorney General Jeff Sessions notified 29 cities, metro areas, counties and states that their "sanctuary policies" might be in violation of federal law and threatened to withhold law enforcement grants.

Thirteen states have passed legislation which allows immigrants to get driver's licenses without proving their legal status. Some even limit sharing immigrants' information with government officials.

Speaking to the nation's governors on Monday, President Trump said it was essential for all municipalities and state governments to comply with immigration enforcement requests.

"Jurisdictions that adopt sanctuary policies and instead release these criminals put all of Americans in harm's way," Trump said. "I know we have different policies, different feelings, different everything. But sanctuary cities are causing us a tremendous problem in this country. We have stone-cold killers that they don't want to hand over to us and then they escape into communities and they cause, in some cases, tremendous havoc."

Gurbir Grewal, the state attorney general for New Jersey, said the Trump administration "is sacrificing public safety for political expedience" and that it is sad the Justice Department had "agreed to go along with this election-year stunt."

Meanwhile, Joe Kelly, the US Attorney for the district of Nebraska, held a news conference to highlight the benefits of local and state law enforcement agencies cooperating with the federal government to enforce immigration laws. Kelly said public safety can be jeopardized if local officials refuse to cooperate.

"Each year, many Americans fall victim to crimes committed by illegal aliens because certain officials choose to prioritize their own ideologies over their sworn obligation to uphold the law," Kelly said. "We don't have any of those problems here in the state of Nebraska."