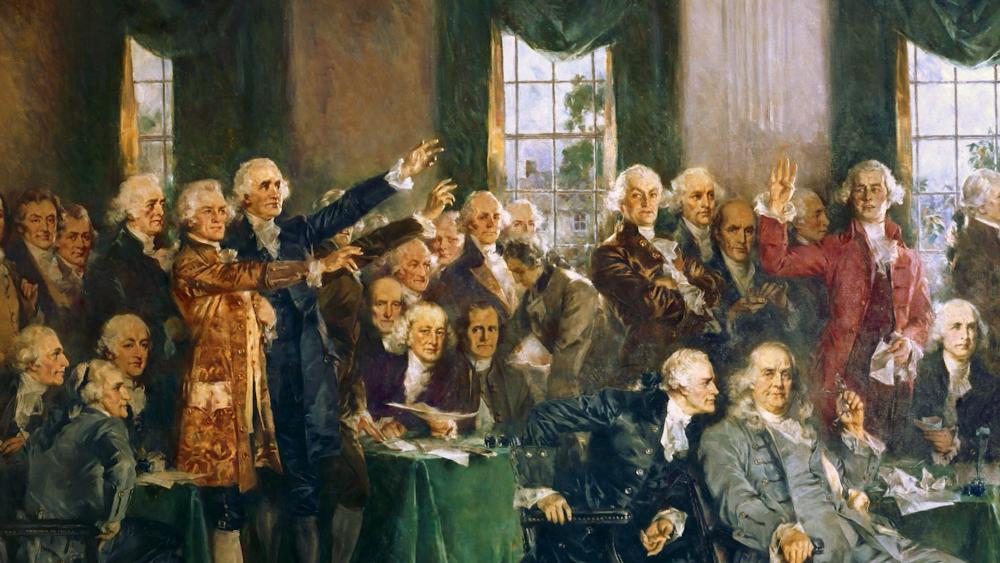 PHILADELPHIA  – As we celebrate Presidents Day, it's important to remember the first five commanders-in-chief were also all Founding Fathers of the nation. What you may not know is how crucial The Founders' faith was in America's beginning. And much of that beginning took place in Philadelphia.

In locations all around colonial Philadelphia, Founders who knew the God of Liberty fought to form a nation of liberty.

The Providence Forum has organized a self-guided Faith and Freedom Tour to show you how Christianity and the intense desire for liberty in these locations birthed this freest of free nations.

"Why Philadelphia? Because this was the big city. It was much bigger than the little farm town of New York," Providence Forum founder Peter Lillback told CBN News. "Philadelphia was also centrally located. It was a big city right in the middle."

Touring around the sights, Lillback described how Bible beliefs backed each step the Founding Fathers took. Standing near a statue of George Washington, Lillback stated the first president personified this.

"Washington said we need to follow Christ or we're never going to succeed as a nation. That's not a minister. That's not a right-wing conservative fundamentalist. That's the father of our country!" Lillback exclaimed.

He offered that it's significant and apropos that Washington's statue is located right outside Independence Hall since that's where the Founders declared the colonies' freedom and formed the fledgling country's constitution.

Washington led the army that fought for that freedom, then presided over the 1787 Constitutional Convention, and finally led the nation as its first chief executive. But he was always guided by his faith that he held so dear.

How to be a Happy Nation

Lillback explained of Washington, "He's the one who said, 'Unless we imitate the Divine Author of our blessed religion in terms of His charity, humility, and specific temperament of mind, we'll never be a happy nation.'"

In a world used to rule by monarchs, he almost singlehandedly broke Americans out of the habit of being subjects.

"When he was called on to become king, he refused. Because he said, 'We're going to let the people decide,'" Lillback shared.

Followers of Christ the Carpenter Met in Carpenters Hall

But many years before that, leaders from the various colonies gathered for the first time and in Philadelphia in 1774 to figure out how to remove the oppressive grip Britain had wrapped around the colonies' collective neck.

These colonial leaders were overwhelmingly of the Christian faith, following Jesus Christ, a carpenter. And interestingly enough, where they first met was called Carpenters' Hall.

They longed to unite against Britain but were divided by deep denominational differences and even regional customs. Like when Massachusetts' John Adams first encountered Washington, the Virginian.

"They're all gathered together. They've never been in the same room, they're meeting each other for the first time. John Adams meets this big tall Virginian, George Washington. And they don't even know how to shake hands. John Adams comes up to shake his hand and George Washington steps back. Because Virginians don't shake hands. They give a bow," Lillback explained.

These men gathering in Carpenters' Hall were taking the actions that would someday give birth to America. Did it begin in rebellion? In bloodshed? It actually began in that hall with prayer.

Standing in front of Carpenters' Hall, Lillback stated, "This is where the first prayer for the country happens. But not without a debate. They debated the question could they even pray? Not because they didn't believe in prayer, but because all the different denominations believed that the others were wrong, and they couldn't fellowship with them," Lillback related.

The Spark Plug of the American Revolution said 'I'm no Bigot'

That's when one of the fieriest radicals against the British stepped into the breach and bridged the gap.

"This is the great accomplishment of Samuel Adams, called the spark plug of the American Revolution, who said, 'I'm no bigot. I can pray with any man who loves his God and loves his country'," Lillback said.

Adams called on this First Continental Congress to invite over local Anglican minister Jacob Duche to come and lead them in prayer. Adams was a Congregationalist. Not all that many years before, his people waged war against England's Anglicans and even beheaded the British king, head of the Anglican church.

They Prayed in Jesus' Name

But like Samuel Adams, Jacob Duche rose to the occasion, and soon arrived in Carpenters Hall.

"Leads in prayer and he does it in the name of Jesus Christ," Lillback shared. "So we can honestly say the United States was begun with a prayer meeting."

He went on, "I think it's a beautiful thing to realize that American colonialists found a way to come together, and they did it in the Gospel name of Christ, crossing denominational boundaries."

What these men accomplished, Lillback characterized as, "The spiritual and political first step of the First Continental Congress of the United States."

And Lillback said of Adams reaching out across the denominational aisle, "It was at that moment that Sam Adams created the American ecumenical spirit, where, in the public square, we can walk over our denominational boundaries."

Jefferson Wanted Liberty for the Slaves, Too

As the Revolutionary War began, these rebel leaders soon moved into what would become known as Independence Hall. From there, they sent Thomas Jefferson off to come up with the Declaration of Independence. Working nearby, he put together those famed words about life and liberty but also wrote a whole section against slavery.

For those who believe America was just a bunch of uncaring, hard-hearted plantation owners lording it over slaves they felt they had every right to own, the picture was much more complex.

Lillback said of the Declaration's author, "Jefferson, although a slave owner, realized that they were making the world over again. He said something unique is happening here. And he said, 'We need to end slavery.'"

Aided by the likes of John Adams and Benjamin Franklin, Jefferson finished and submitted the Declaration to his fellow delegates.

88 Changes to the Declaration of Independence

"It went to the Congress. And we're told that while it was being debated, Jefferson was fuming in the corner. Because there were some 88 changes that were made to his document," Lillback said, adding that one of those changes was taking out Jefferson's idea to wipe out slavery.

But others continued the battle. Opponents of slavery pointed out the scripture from Leviticus engraved in the nearby Liberty Bell.

Lillback stated they'd remark, "Doesn't that old bell say, 'Proclaim liberty throughout the land to ALL inhabitants thereof?' And this became the great icon of the abolitionists' assault against slavery. And they're the ones who named it the Liberty Bell."

Accepting All Men are Sinners, All are Depraved

Meanwhile, at the 1787 Constitutional Convention in Independence Hall, the Founders accepted the Bible's saying all men are sinners and in their depravity can't be trusted.

Lillback recalled, "There's an amazing story that happens in James Madison's record of the Constitutional Convention. They're debating how they should distribute votes. And one of the large states says, 'We should get more votes; we have more people.' And one of the little states says, 'That's not fair. You'll always outvote us.' And the representative of the big state says, 'Don't worry. We'll take care of you.' And the little state representative says, 'We don't trust you! We believe in political depravity. We need a way that will check your power.'

Lillback continued, "And so a bicameral system was created. The Senate having two senators for every state, the House of Representatives having a proportional number of votes based on population, both of them having the right to make the law, and neither one can do it without the other - forcing cooperation and compromise. So it's an amazing system of 'how do we bring together diversity and still achieve common unity?' A brilliant solution."

This first Congress of the United States then started to meet just a few feet from Independence Hall.

The Bible suggested people needed representatives, but also said they needed judges. So on the other side of Independence Hall, the first US Supreme Court convened presided over by Chief Justice John Jay.

"He also turns out to be a president of the American Bible Society," Lillback said of Jay. "So we see that people who love the Bible were also leaders in government."

Why Washington May Be the Greatest Man in Western Civilization

Like Washington, who refused to give up in the bitter, killing cold of Valley Forge and later refused to take a crown.

"Some people say Washington is the greatest man in Western civilization for the two things he DIDN'T do: he didn't quit when all was lost and he didn't become king when all was won," Lillback remarked, concluding, "And in doing both, he was following the very character of Christ, who persevered to accomplish His mission and only did it in the right way."

You can visit the Faith and Freedom Tour website and be guided to dozens of other Philadelphia locations where you can see for yourself how the Lord, His liberty, and this land all fit together.

*This story was first published when tours were available, before the pandemic.