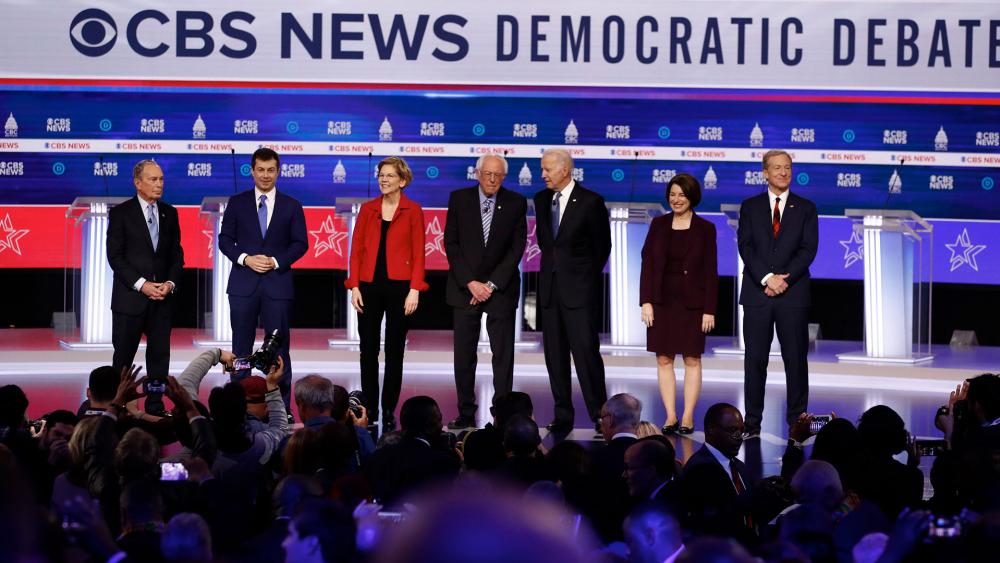 "Vladimir Putin thinks that Donald Trump should be president of the United States, and that's why Russia is helping you get elected," said Bloomberg.

Sanders responded, saying of Putin, "If I am president of the United States, you're not going to interfere in any more American elections."

Sanders, now the front runner for his party's nomination, also defended comments he has made praising Cuban dictator Fidel Castro.

"Of course, you got a dictatorship in Cuba," said Sanders of the issue that caused the audience to boo him. "What I said is what Barack Obama said, in terms of Cuba, that Cuba made progress on education."

During the debate, Sen. Elizabeth Warren shared how she once lost a teaching job because she was pregnant. She then tore into Bloomberg over his mistreatment of women.

"At least I didn't have a boss who said to me 'kill it' the way that Mayor Bloomberg alleged to have said to one of his pregnant employees," said Warren.

Bloomberg denied ever making that comment but did apologize for past offensive statements in an effort to put the issue behind him.

"Probably wrong to make the jokes," said Bloomberg. "I don't remember what they were, so I assume. If it bothered them, I was wrong, and I apologize. I'm sorry for that."

At times, it appeared the moderators lost control as the candidates spoke over one another.

Sanders was also hit hard over how he'll pay for his big spending plans like Medicare For All, the Green New Deal and free college tuition.

"No, the math does not add up," said Sen. Amy Klobuchar. "In fact, just on '60 Minutes' this weekend he said he wasn't going to rattle through the nickels and the dimes. Well, let me tell you how many nickels and dimes we're talking about. Nearly 60-trillion dollars. Do you know how much that is for all of his programs? That is three times the American economy, not the federal government, the entire American economy."

Former South Bend Mayor Pete Buttigieg, who is second behind Sanders in delegates, made the case that if Sanders wins the nomination, Democrats will be the big losers in November.

"I'll tell you exactly what it adds up to. It adds up as four more years of Donald Trump, Kevin McCarthy as Speaker of the House, and the inability to get the Senate into Democratic hands," said Buttigieg.

On the issue of peace in the Middle East, Sanders said the US should reach out to both Palestinians and the Israelis, all while bashing Israeli Prime Minister Benjamin Netanyahu.

"You have a reactionary racist who is now running that country," said Sanders. "I happen to believe that what our foreign policy in the Mideast should be about absolutely protecting the independence and security of Israel, but you cannot ignore the suffering of the Palestinian people. We have got to have a policy that reaches out to the Palestinians."

Former Vice-President Joe Biden, who performed poorly Iowa, New Hampshire, and Nevada, has called the upcoming South Carolina primary his firewall because of the support of black voters.

Meanwhile, with all the shouting, it's not clear exactly who won Tuesday night's debate. But it's the last one before Super Tuesday with more than 30 percent of the delegates up for grabs.