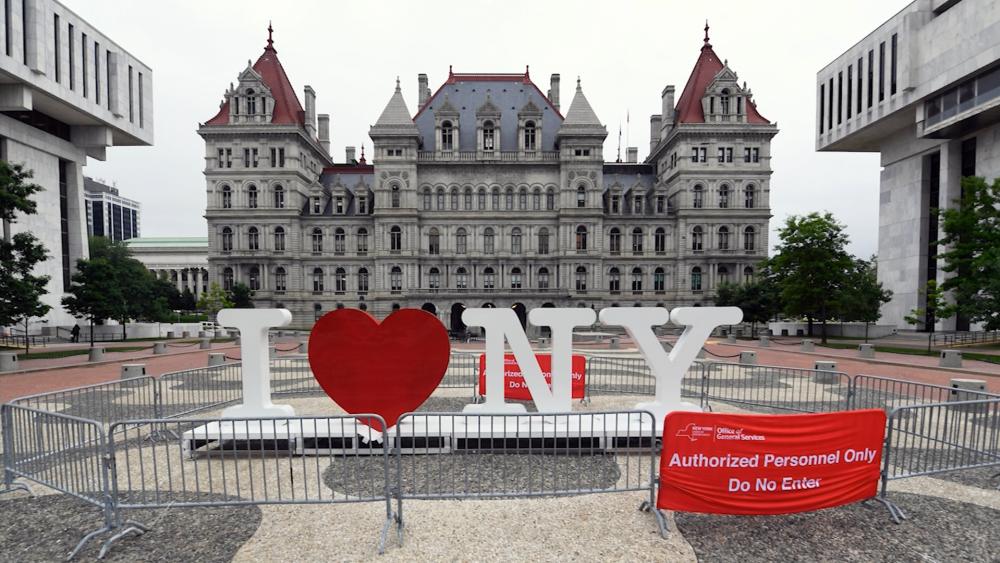 SARATOGA SPRINGS, NY –  It's a David vs. Goliath battle for the soul of New York. Two Christian, conservative women are running for Congress in this heavily "blue" state. And although the odds may be stacked against them, Liz Joy of Albany and Beth Parlato of Buffalo say in the wake of recent events, they can no longer be silent.

In January 2019, New York passed the Reproductive Health Act that expanded the right to an abortion for any reason, even to the point of birth. It also eliminated several restrictions on abortion. Democratic Governor Andrew Cuomo signed the nation's most aggressive abortion bill into law as state representatives cheered. Later that night, the governor ordered the One World Trade Center to be lit in pink to celebrate the event and "shine a bright light forward for the rest of the nation to follow."

It was the straw that broke the camel's back for attorney Beth Parlato of Buffalo and real estate agent and author Liz Joy of Albany.

"I've had enough," said Liz Joy, a Republican running in New York's 20th Congressional district. "When you have people that are supposed to be role models for your children, the governor of New York, clapping and cheering and lighting up buildings for aborting children all the way up until to the time of delivery, I just decided that I've had enough," she said.

Joy is a doctor's wife and mother of four grown children who has never run for political office before. She says as a Christian and life-long resident of New York, she couldn't stand by and do nothing. "Our country is built on this Judeo-Christian foundation and I see in the House of Representatives we have professed socialists, socialists do not respect human life, socialists do not respect freedom," Joy said.

Running for Love of Family

Beth Parlato, whose campaign ad features her big Italian family passing around grandma's pasta and meatballs, says it's her love of family and family values that compelled her to run in New York's 27th Congressional district.

"As a Conservative and as a Christian, the family is everything to me, my kids are everything. What kind of world are we going to have for our children and my grandchildren if we don't do something about what's going on in our nation right now?" Parlato asked.

Although Joy and Parlato have plenty of passion, what they'll need come election day are votes and as the new kids on the block, they face an uphill battle.

Taking on a Career Politician

Liz Joy is running in a Democratic stronghold against incumbent Paul Tonko, a 70-year old career politician, who has held the seat since 2009. He voted against the Born-Alive Abortion Survivors Protection Act, which protects babies who survive a botched abortion. He voted that those infant children should not receive any medical care. He's also a strong supporter of Planned Parenthood.

"I'm deeply concerned regarding the misguided fixation to take away valuable resources from women with efforts to de-fund Planned Parenthood," Tonko said.

Joy says Tonko's abortion views are too extreme for many New Yorkers, even some Democrats.

"I am conservative but I am also pro-choice but I think that was too aggressive," said one local businesswoman.
Ben said, "this kind of decision is between women and their doctors and not male legislators."

When asked if she was ok being a resident of a state with some of the most aggressive abortion laws in the nation, Rose Mary said, "Well, yes. Because I think the government should really get out of making that decision." And Larry, from upstate New York, said, "I don't like it. I think taking a human life is wrong and I don't think inconvenience is something that should justify that."

Meanwhile, Beth Parlato is running in the state's most Republican district, New York's 27th just outside of Buffalo. The attorney, former judge and Fox News contributor will try to fill the seat previously held by Republican Chris Collins. Collins recently resigned before pleading guilty to charges related to insider trading. "The election to win in this election is the primary," said Parlato. "So whoever gets through the Primary will be the next Congressman or woman."

One Election Away from Socialism?

Parlato believes we are one election away from socialism and says there are far too few conservative women in office.

In order to sit at that table, Parlato will have to beat two other Republicans, both current New York State Senators, Robb Ortt and Chris Jacobs. But Parlato believes she has the edge.

For Joy, winning in a solidly blue district will depend in large part on the Evangelical turn-out. In 2016 she wrote a book called How to be Salt and Light – The Christian's Guide to Voting. She says if believers will get out and vote they can change the political landscape of America.

"In 2016, the country had the largest Evangelical Christian voting block that ever turned out in the history of the nation to vote and we have Pres. Donald Trump, as a result, a pro-life president and pro-Israel." Joy said. "Christians need to be steering the country instead of it being the other way around."

Win or lose on election day, Parlato and Joy say this is not the time to be silent. They hope their campaigns will inspire others to let their voices be heard, for such a time as this. The New York Republican Primary is June 23rd.