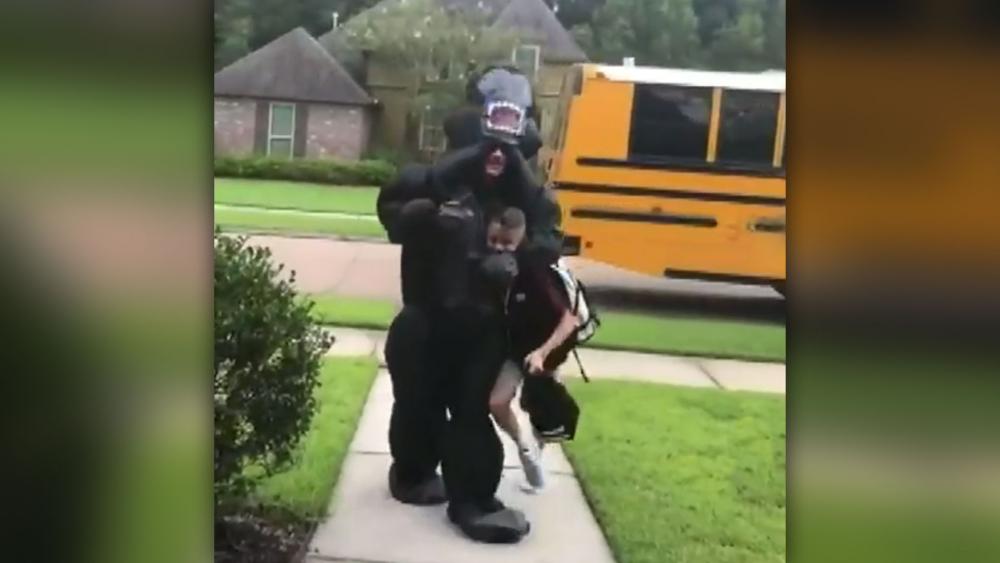 A Louisiana teenager was looking for a way to make his younger brother smile, and he sure found a way to do it.

Since last August, 17-year-old Noah Tingle has been greeting his brother Max as he gets off the bus from school - but wearing a different costume each time, WTVG-TV reports.

"I saw that he was getting off the bus so I wanted to embarrass him and just kept going with it," Noah said.

His 12-year-old brother Max didn't like the idea at first, but now he "thinks it's cool."

The teen started filming the bus stop surprises and posted them on a Facebook page he created called, "The Bus Brother."

Noah explained that the news can be negative so he wanted to show viewers something fun and upbeat.

"Looking at a lot of the news today, there's a lot of negative and to see something like this, something positive - people love it."

Some of his outfits include Santa Claus, Elvis, an inflatable gorilla and Chewbacca.

Also, the big brother wanted to leave his sibling with good memories before he heads off to college.

The Bus Brother has also used their videos as a platform to encourage viewers who are struggling during difficult times.

Noah and Max made a video for one of their fans who had been bullied at school.

"We heard that people aren't being very kind to you at school. We wanted to let you know that we've been through that and to keep your head up. We're sorry that they treated you like this. We wish everybody kind and happy. Keep your head up. We hope that you have a great rest of your school year. We think you're awesome."

Noah receives costume donations from neighbors and other members of the community.

The boys parents support the playful bus stop greetings and see the positive impact it has on others.

"We want our boys to be a light in the world and I think their kind of being that right now."

Students, strangers - even the bus driver will check in daily to see what Noah will be wearing.

Ridin’ toward the weekend#thebusbrother #yeehaw #giddyup