Storms Bring Bouts of Heavy Rain, Mountain Snow to Northwestern US This Week 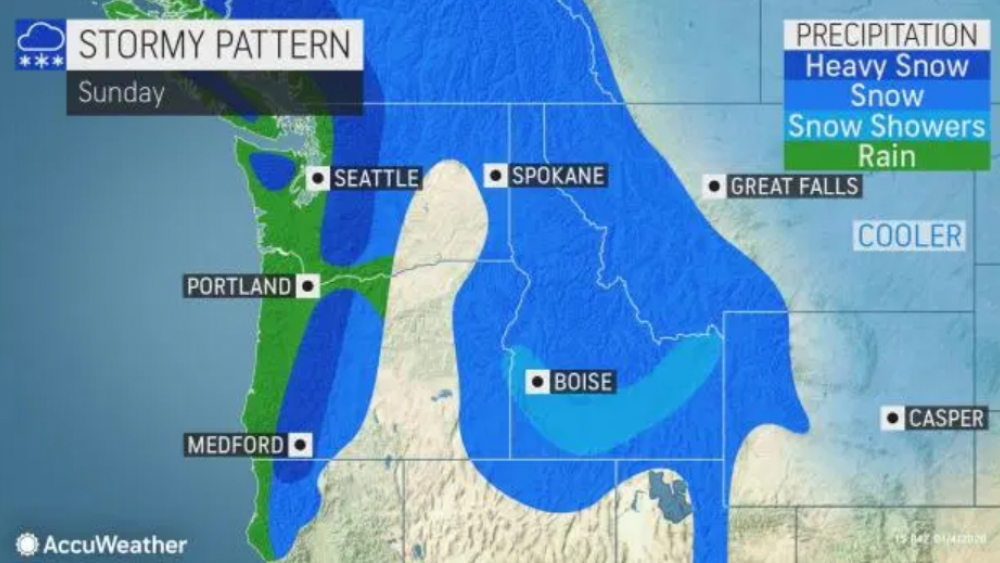 The pattern across the Northwest will remain active through the coming week as storms line up to track across the region. A couple storms can produce localized flooding and snow-covered roads in parts of the region.

A storm moved through the Pacific Northwest late Friday and into Saturday, bringing periods of rain and mountain snow to the area.

As the storm slammed into the Northwest coast to end the week, it brought widespread wind gusts of 40-50 mph, which brought down trees and knocked out power for some Friday night.

Through the end of the weekend, this storm system will spread some rain and snow showers and gusty winds into the interior Northwest, northern Plains and central Rocky Mountains.

At the same time, another storm will continue moving into the Northwest on Sunday.

While this second storm will bring another round of rain to the coast and snow to the Cascades, it is not expected to be as impactful as the storm earlier in the weekend.

"This quick-moving system will also bring some showers west of the Cascades late in the day on Sunday," said AccuWeather Senior Meteorologist Dave Houk.

This won't be the end of the storminess in the Northwest. Another storm is forecast to move into the Gulf of Alaska on Monday as the first half of the storm reaches the Pacific Northwest.

Plenty of moisture traveling with this part of the storm will bring a round of heavy, coastal rain and heavy snow to the western slopes of the Cascades of Washington on Monday.

Warmer air will also move into the region, limiting snow to elevations above 6,000 feet.

On Monday night, the heaviest precipitation will be drawn north into the Olympic Peninsula and southern Canada as the second half of the storm approaches the coast.

The storm is forecast to move into southern British Columbia on Tuesday, which will bring a cold front to the Pacific Northwest.

As rain and high-elevation snow continues in northwestern Washington, a new round of rain will arrive for Oregon and far Northern California.

"This persistent pattern of rain should help to alleviate, at least to some degree, the moderate drought conditions currently plaguing the area," stated AccuWeather Meteorologist Max Gawryla.

Behind the storm, a fresh round of cold air will follow, and snow levels will drop to around 3,000 to 4,000 feet by Tuesday night. Travel can become dangerous in some mountain passes.

Snow levels are expected to drop to around these levels across Idaho and Montana into Wednesday as the storm moves inland, spreading snow across the interior mountains.

In the valleys, a couple of rain or snow shower can occur, but mainly dry conditions can be expected.

Snow showers, mainly in the higher elevations of the region, can linger through Thursday as the storm system slowly exits the region.

This quick break in the onslaught of storms will come to a close by the end of the week.

"After some showery spells on Wednesday and Thursday, a bigger storm looks to come in again late in the week," added Houk.

This potent storm is forecast to track along the Canadian coast and slide into the Pacific Northwest on Friday and into Saturday.

Forecasters say the storm will once again threaten to bring another round of coastal rain and heavy snow to the western-facing slopes of the mountains.