SURVEY: Most Churches Have Security in Place but Divided on Members with Guns 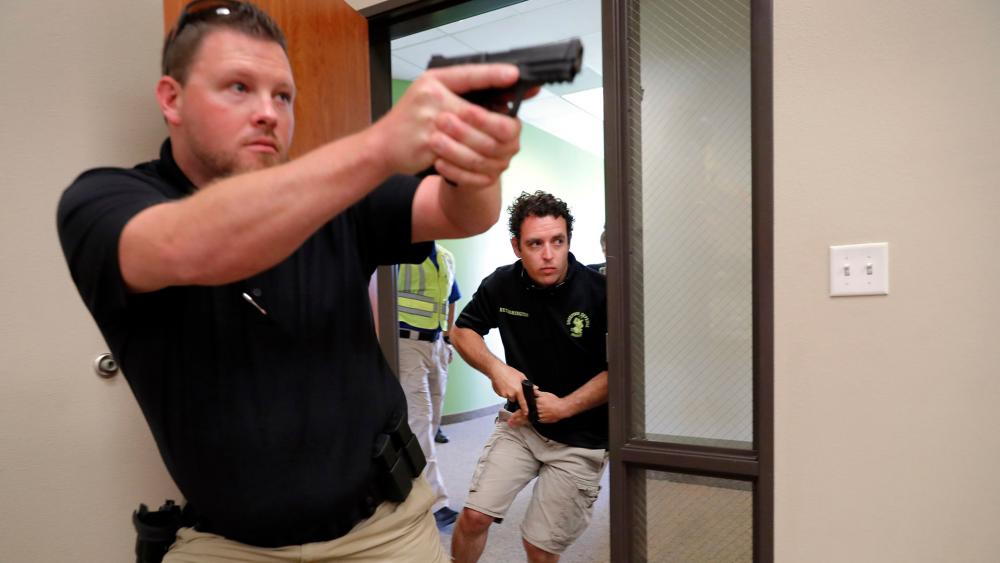 After several church shootings over the past few years, most Protestant pastors say their congregations have taken precautions to protect their members during worship services.

Since 2000, 19 fatal shootings have taken place at Christian churches. Gunmen have also taken lives at other religious sites, including Jewish synagogues, a Sikh temple, and an Amish school.

Around 4 in 5 Protestant pastors (80%) say their church has some type of security measure in place when they gather for worship, according to a survey from Nashville-based LifeWay Research.

"Churches are some of the most common gatherings in any community, and that makes them targets," said Scott McConnell, executive director of LifeWay Research. "Most churches understand this and have responded in some way."

Many churches already have a plan in place for dealing with an active shooter. According to LifeWay, almost 2 in 3 pastors (62%) say their church has an intentional plan for an active shooter situation.

Audience size plays a factor in security plans. The more people who show up to worship services each week, the more likely the church is to have made plans for a potential gunman.

Having firearms in church carried by members is still being debated by church leadership. Almost half (45 percent) of the pastors polled say part of their security measures include having armed church members.

Other churches place their emphasis on keeping all guns away from the worship service, according to LifeWay.

More than a quarter (27%) have a no-firearms policy for the building where they meet and 3% have metal detectors at entrances to screen for weapons.

'Be Prepared Without Being Distracted'

While methods vary, most churches start with the resources they have to prepare for what they hope will never happen," said McConnell. "With planning, a church can be prepared without being distracted or paralyzed by the threat. Pastors are trying to balance two responsibilities — protect those on the inside while being as welcoming as possible to those on the outside."

In the survey conducted by LifeWay before the West Freeway Church of Christ shooting in December of 2019, close to a quarter of Protestant pastors (23%) said they have armed private security on site. Additionally, 6% say they have uniformed police officers on-site as an added security measure.

For the vast majority of churchgoers (73%), the presence of a uniformed policeman or security guard at church makes them feel safer, with 37% saying they feel much safer.

African American pastors are the most likely to say they have both armed private security personnel (41%) and uniformed police officers (18%) on-site.

In an email to CBN News, LifeWay's McConnell answered questions regarding his company's survey on church security.

CBN News: "First, did the research surprise you about the number of pastors who said they had some type of security in place?"

"Since the likelihood that any specific church will have a shooting this week is extremely low, we wanted to know how many have made preparations despite these odds," McConnell replied. "We found a large number have taken security measures even though these incidents are thankfully infrequent. Though rare, the risk of a church shooting is real in the same way harm from infrequent occurrences such as tornadoes or heart attacks on church premises are real."

CBN News: "Did it surprise you that where the church is located plays a factor in their having a security plan?"

"One of the largest geographic differences we see is in the use of armed church members as a security measure. Churches in the South and West are much more likely to say this is part of their security measures than churches in the Northeast," he noted. "This is not surprising given that gun ownership is much lower in the Northeast. And though the potential threat of an active shooter situation has no geographic limitations, regional attitudes about guns are different."

CBN News: "Were you surprised about the number of churches that said they had no security plan/firearms policy in place?"

"The smallest churches are the ones least likely to have an intentional plan for an active shooter situation and the most likely to indicate they have not taken any of the security measures in this survey," McConnell wrote. "While they have fewer members who could be a potential threat, they are just as vulnerable to a visitor putting them at risk."

"This research study did not ask pastors why they have or have not taken any of these security measures. We expect that ministry, financial, spiritual, time, and social reasons may all factor into the security decisions of churches," he added. "From the perspective of churchgoers, far more say that uniformed police or security guards make them feel safer than those who say their presence makes them feel less safe."