Alliance Defending Freedom Senior Counsel Matt Sharp appeared on Thursday afternoon's edition of CBN News' Faith Nation to talk about the ERA and the negative impact it will have on women. Newswatch is seen weekdays on the CBN News Channel.  For a programming schedule, click here.

The divide over a US Constitutional amendment called the Equal Rights Amendment (ERA) is being revived now that Virginia lawmakers overwhelmingly passed the measure with their new Democratic majority.

The ERA reverberates well beyond Richmond.

Supporters have been working for decades hoping to find 38 states to ratify the ERA, the number needed for it to be added to the Constitution.

Its original intent was to give women equal rights. But critics say it's poorly written and will have unintended consequences that could affect everything from abortion, maternity leave - even women's sports.

The move by Virginia Democrats is being called "virtue signaling" or "showmanship" since the US Justice Department has ruled that the ERA is dead.

The Justice Department said in a new 38-page opinion published earlier this month that recent efforts at ratification by Virginia Democrats to revive the ERA are futile.

The Office of Legal Counsel, which are the in-house lawyers for the Executive Branch of the federal government, said the time limit Congress put on the ratification process back in the 1970s was valid and has long since passed, according to The Washington Times.

The Justice Department's opinion was released right before Virginia's General Assembly convened its first 2020 session. The new Democratic majority in the state had set the ratification of the ERA as one of its top goals.

Senior Counsel Matt Sharp with Alliance Defending Freedom told CBN News that the ERA would add sex as a protected classification under the Constitution.

"It would result in men being allowed to compete in women's sports and take away opportunities for women. It can also be used to enshrine abortion as a constitutional right and force taxpayers to pay for it."

"There is the Equal Protection Clause of the Constitution, ensuring that every American is treated equally under the law and we have numerous federal laws already on the books such as Title 9 and others that ensure women cannot be discriminated against. What the ERA is going to do is actually undermine some of those existing protections and erode the hard-fought gains that women have made over the years."

Earlier this month, the Trump administration declared the is dead and has been dead for 40 years and no action by state legislatures or Congress can resurrect it.

"The ERA is legally dead and this is an opinion shared by Justice Ruther Bader Ginsburg recently opined that if the ERA proponents want to see this, they need to start over because this deadline is decades long gone. This is a last minute push by activists who ignored that deadline. This is a failed effort to try and push something that the states have ultimately rejected and they decided they didn't want in our Constitution," Sharp said.

Sharp believes ERA supporters could push for this case make it all the way to the Supreme Court.

"I think the other side is obviously very motivated. They are willing to ignore the deadlines. I would imagine they are going to try and sue the federal government for not recognizing their failed ratification efforts. This may end up in the Supreme Court but I think we can all agree that this deadline has passed. Even if it had not, the ERA is a bad law that we should not be pushing for to add to our Constitution," Sharp concluded. 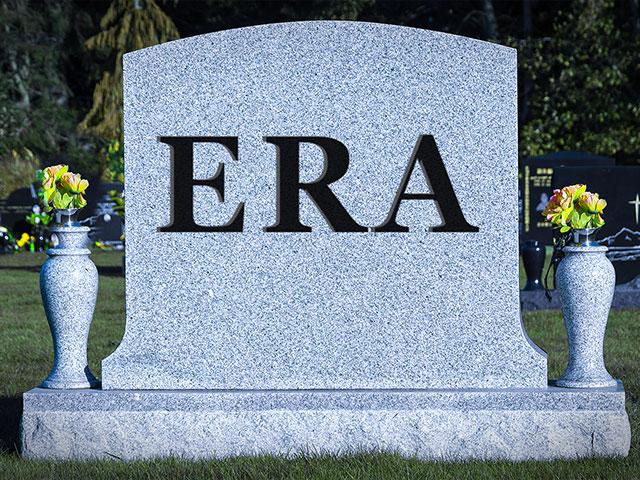