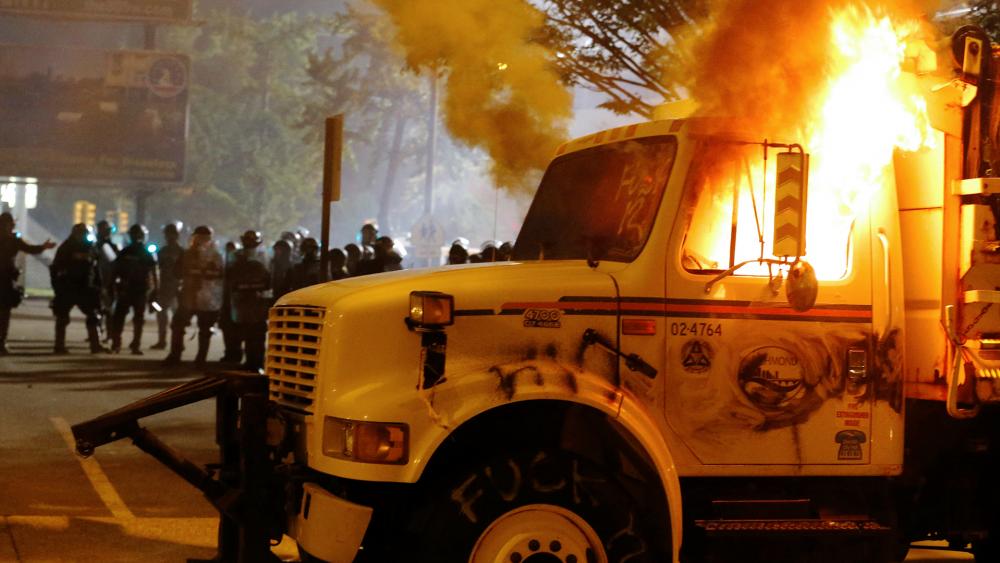 Police stand in front of a utility vehicle that was set on fire by protesters during a demonstration outside the Richmond Police Department headquarters on Grace Street in Richmond, Va., July 25, 2020 (Joe Mahoney/Richmond Times-Dispatch via AP)

Rioters in Richmond, VA recently unleashed more than $100,000 in damage to buildings at Virginia Commonwealth University and set a city truck on fire.

That was just part of the damage caused by the rioters outside of the Richmond Police Department last Saturday night. City officials say the ruckus was not altogether unexpected because a notice had been circulating online calling protestors to show up late that night.

The Richmond Times-Dispatch pulled no punches in blaming city leaders for failing to stop the riots: "Let us be clear: Saturday night's violence was a planned riot. Before the July 25 event, flyers promoting mayhem under the guise of 'Richmond Stands with Portland' circulated around the internet."

Richmond Police Chief Gerald Smith says the crowd hurled hard objects like batteries, bottles, and other items at police trying to contain the situation. Officers were finally able to disperse the crowd using tear gas and other chemical munitions.

Richmond Mayor Levar Stoney said the event was disappointing and infuriating because the city had gone weeks without a violent demonstration in the wake of the death of George Floyd.

"This set us back," Stoney said.

The mayor offered a surprising claim, arguing that those behind the violence may have been out of town white supremacists operating under the guise of Black Lives Matter protestors. The mayor said BLM organizers assured city officials they were not a part of the violence.

Police Chief Gerald Smith said evidence indicates the leftist Antifa and right-wing militia group Boogaloo Boys may have taken part in the violence. Smith asked media outlets and anyone who might have pictures or videos that could help identify those involved to let police know.

The claims from the mayor and police chief come as both are being blamed in a scathing editorial in the Richmond Times-Dispatch, which argues the two city leaders should have acted sooner to put down the protests.

"Mayor Levar Stoney first blamed the protest on the presence of white supremacists. A few minutes later, Smith seemed to contradict the mayor and admitted that they believe both Antifa members and "boogaloo boys" were present. The chief then acknowledged city officials had no idea who protesters were," the paper points out.

"The absence of leadership at all levels of government has compounded these circumstances," the editorial said. "We've normalized too many behaviors that make Richmond, and the United States, a less safe and prosperous place to be."