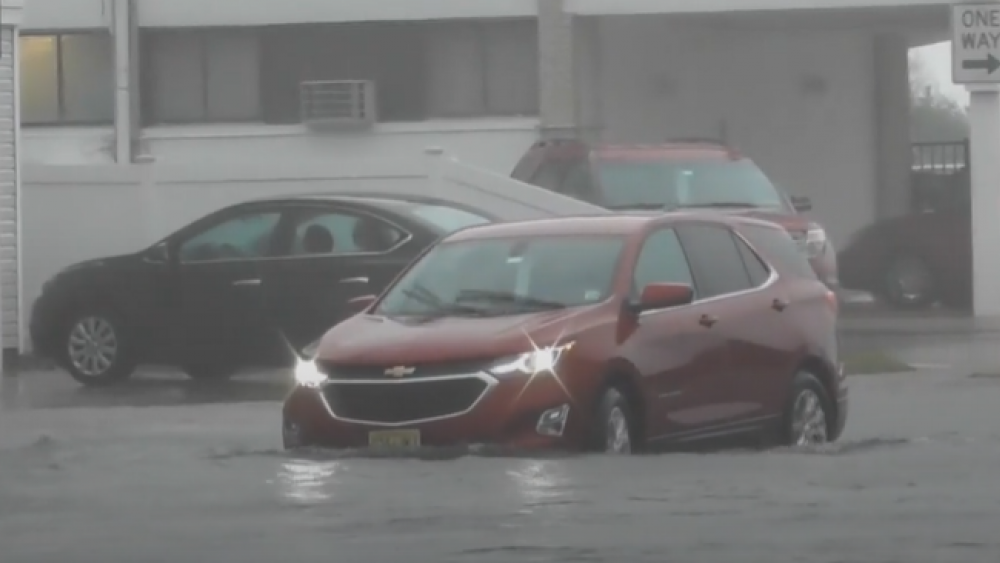 After a prelude of strong winds and flooding downpours across the northeastern coast, the record-breaking Tropical Storm Fay made landfall near Atlantic City, New Jersey, just before 5 p.m. EDT Friday. The city is just a few miles from Brigantine, New Jersey, where Superstorm Sandy made landfall in 2012.

Fay had weakened as of 5 a.m. EDT Saturday, its sustained winds slowing to 35 mph as it continued its path northward at a speed of 17 mph. The center of the storm was located about 50 miles north of New York City, according to the National Hurricane Center. With the recent downgrade in maximum wind speed, Fay has now been downgraded to a post-tropical depression.

Residents of New Jersey woke up Friday morning to heavy winds and flooding downpours from then Tropical Storm Fay. The storm had formed less than 24 hours earlier off the coast of Cape Hatteras, North Carolina, lighting up tropical storm warnings up the East Coast from Delaware across the New Jersey coast to New York City and Long Island as the system trekked northward. Flash flood watches and warnings stretched from central Delaware to central New York.

"It sounded like someone was taking a hose to our window for hours and hours, and it actually kept us up a lot of the night it was raining so hard," Mark Ciccarone told AccuWeather field reporter Jonathan Petramala on Friday afternoon.

The onset of the storm even brought about an abrupt cancellation of a weekend re-election campaign rally for President Donald Trump, slated to be held in Portsmouth, New Hampshire. The event would be delayed by a week or two, Press Secretary Kayleigh McEnany told reporters.

Fay's outer bands were sweeping across South Jersey by Friday morning, more than 10,000 customers losing power across the state amid the storm, according to PowerOutage.us. A video on social media showed the streets of Stone Harbor, New Jersey, already flooded. Another video on social media showed a man floating down the street on a pool inner tube with a paddle, the caption reading "going to the store to get eggs and bread!" Despite the humor, the rising waters were enough to force some roads to close and even stop a few cars in their tracks.

A few good Samaritans came to the aid of two women in Wildwood, New Jersey when their car got stuck in the flooded road.

"We called for help ... they didn't come," one woman told Petramala. "They didn't help. But some really good Samaritans got out of the car, helped us, got us out of the water, got us into the parking lot safely, and everything."

Coastal towns in Delaware were also dealing with flooding as up to 5 to 6 inches of rain fell across areas like Rehoboth Beach, Delaware, as of Friday afternoon. Farther south, Hunting Island State Park in South Carolina had recorded up to 12.75 inches of rainfall as of Friday morning. Meanwhile, Lewes, Delaware measured 6.97 inches of rain in less than 24 hours, which is double the amount that typically falls in all of July.

By late Friday evening, just over 2.50 inches of rain had been recorded in Central Park, and there were several reports of road closures across New York City, according to the National Weather Service.

While Fay did unload heavy rain across New York City, the center of the storm tacked just west of the city. If it had moved directly over New York City, it would have become just the fourth tropical system to do so this early in the hurricane season (before Aug. 1), according to AccuWeather Meteorologist and Senior Weather Editor Jesse Ferrell. "Most direct hits were later in the season or outside of the metro area. The early tropical storms were Hurricane Bertha in 1996, Hurricane Agnes in 1972, and Tropical Storm Brenda in 1960."

"Many other tropical storms have affected New York City over the years, of course, including Superstorm Sandy in 2012, which was tracked as a post-tropical storm at its landfall in New Jersey," Ferrell said.

Only six tropical cyclones and two post-tropical cyclones have come within 50 miles of southern New England in July since 1851, according to records from the National Weather Service Boston office. The last storm to do so was Beryl in 2006. The other storms include Cindy in 2005, Bertha in 1996, Brenda in 1960, Cindy in 1959, and an unnamed storm in 1916.

The system started as an area of low pressure that had moved just off the coast of the Outer Banks of North Carolina, intensifying and becoming more organized on Thursday evening, becoming Tropical Storm Fay, as AccuWeather had accurately predicted as early as June 29 in stories and other products. Fay was named just before 5 p.m. EDT on Thursday, about 40 miles off the coast of Cape Hatteras, North Carolina. Maintaining a sustained windspeed of 45 mph, Fay had become the earliest named "F" storm in the Atlantic Basin in a record book dating back to the 1960s.