'You Can't Blame This on a Cop': Grieving Parents of Murdered 8-Year-Old Give Gut-Wrenching Press Conference 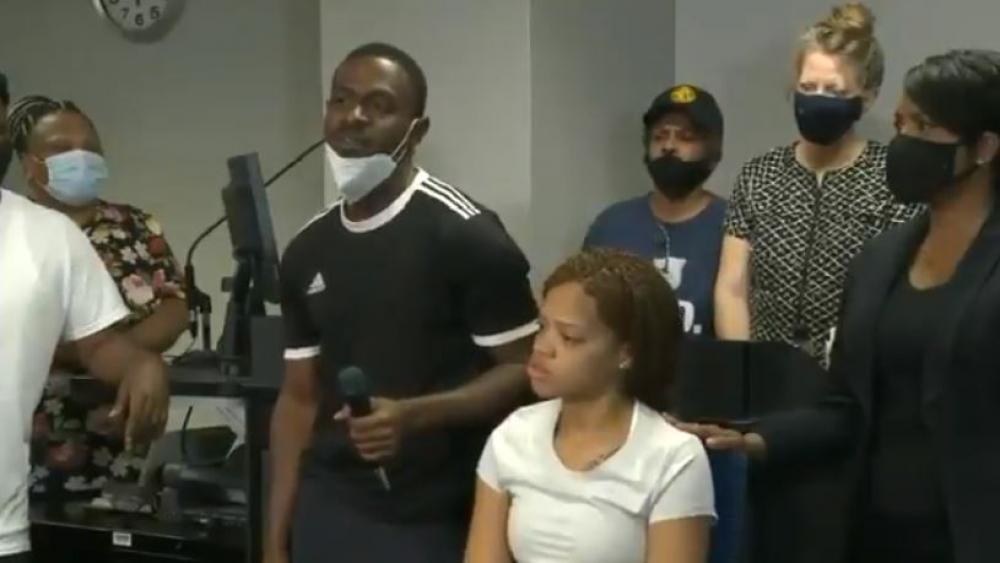 A grieving family facing the unthinkable – their own 8-year-old child gunned down by violent criminals – gave a gut-wrenching press conference in which they expressed incredulity at the black lives matter mantra.

“They say black lives matter. You killed your own. You killed your own this time,” said Secoriya Williamson, father of 8-year-old Secoriea Turner, who was murdered when the vehicle she was riding in came upon a group of armed men blocking a parking lot entrance. When Secoriea’s mother, Charmaine Turner, tried to turn around, the group opened fire.

"They say Black Lives Matter. You killed your own." Secoriya Williamson, father of 8-year-old Secoriea Turner, addressed the public during a press conf. today after his daughter was shot and killed last night while riding in a car w/ her mother in Southeast Atlanta. @11AliveNews pic.twitter.com/odowRbSXsq

Authorities say it was a “group of black men” who were armed and blocking the entrance, which was across the street from the Atlanta area Wendy’s where Rayshard Brooks was killed after he initiated a physical confrontation with two police officers, sparking protests.

“They killed my baby because she crossed the barrier and made a u-turn? You killed a child! She didn’t do nothin’ to nobody.”

“They didn’t give us time to make a u-turn,” Charmaine said. “They started shooting up my car before we could even make a u-turn. Shooting my tires out, like why?”

“But black lives matter?” Secoriya added, questioning the validity of the slogan given his situation. “Killing your own?” You killed an 8-year-old child. She ain’t do nothing to none of y’all. She just wanted to get home to see her cousin.”

“My baby was shot in her (unintelligible). Nobody there to help her,” Charmaine added.

“Enough is enough,” said Atlanta Mayor Keisha Lance Bottoms. “You can’t blame this on a police officer. You can’t say this is about criminal justice reform. This is about some people carrying some weapons who shot up a car with an 8-year-old baby in the car. For what?” a frustrated Bottoms said.

Bottoms said there was nothing wrong with peaceful protests, but warned if anyone engages with any form of violent protest then they have Secoriea’s blood on their hands, too.

WSB-TV released photos of this sweet 8-year-old, happily loving life like most others her age before her life was senselessly cut short.

JUST IN: We just got these photos of 8-year-old Secoriea Turner, who was killed last night near the Wendy's where Rayshard Brooks died: https://t.co/U2niKwoxXF pic.twitter.com/GI9zpSlbLl

According to the Washington Post, the violence happened near the Wendy’s where Rayshard Brooks was killed after he initiated a physical confrontation with two police officers, which sparked protests that led to the Wendy’s being burned down, even though the restaurant clearly had nothing to do with the incident.

Police say Secoriea was riding in a car with her mother and another adult on Saturday night when they attempted to turn into a parking lot of a business across the street from the Wendy’s. The car was then “confronted by a group of armed individuals who had blocked the entrance,” interim police chief Rodney Bryant said during Sunday’s news conference.

“At some point someone in the group opened fire on the vehicle, striking it multiple times, striking the child who was inside,” said Bryant, who condemned the shooting as a “senseless act of violence.”

Secoriea was rushed to a nearby hospital where she later died, he said.

“She died in my arms,” Secoriea’s mother, Charmaine Turner, tearfully told reporters Sunday before she broke down crying and was led out of the news conference by family members.

This recent trend of lawlessness is outrageous & unacceptable. Georgians, including those in uniform, need to be protected from crime & violence. While we stand ready to assist local leaders in restoring peace & maintaining order, we won’t hesitate to take action without them. https://t.co/NTacEm4v7o

Georgia Governor Brian Kemp tweeted about the tragedy, calling out the “lawlessness” that’s emerged in recent weeks. “This lawlessness is outrageous and unacceptable,” he wrote while adding they stand ready to assist local leaders achieve justice but clarified that “we won’t hesitate to take action without them.”

Please pray for the family during this incredibly difficult time. There is also a $10,000 reward for anyone with information about this heinous, senseless act.

Police described the suspects as being a “group of black males” and one was allegedly wearing “all black, dressed like a bounty hunter” while another wore a white t-shirt.