A Tale of Two Bunnies: Carlos Whittaker's Viral Video on Ending Racism by Talking to Your Neighbor 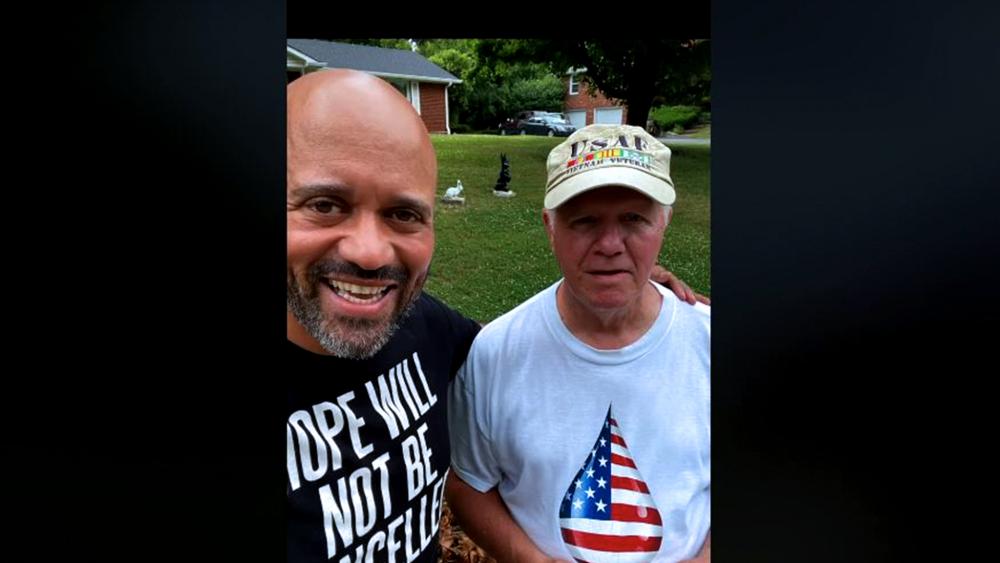 ABOVE:  Carlos Whittaker appeared on the Friday afternoon edition of CBN's Newswatch to talk about his viral video and how Christians and the church can stand up against racial injustice.

Author and speaker Carlos Whittaker posted a video to his Facebook page this week about what he feels is the hard part of ending racism, and it took off. The two-and-a-half-minute video shows him having a long-overdue conversation with his neighbor.

Whittaker, a self-professed "Hope Dealer," who speaks to some of the largest churches around the country, posted the video that shows him having a conversation with his neighbor about race. Whittaker is a supporter of the Black Lives Matter movement, but not the BLM organization because he says some of their positions don't align with Christian beliefs.

But let's get back to that viral video. Whittaker didn't really know his white neighbor because it seemed like the man would ignore him sometimes, and he didn't know how to interpret that.

His neighbor had two white bunnies and the American flag on display in his front yard.

"I am mowing my grass and I see him walk out his front door with a bucket of paint and a paintbrush," Whittaker says in the video.

While he's lived in his Nashville neighborhood for four years, Whittaker had never met the man.

"I've tried to wave at him and smile at him. And he would never acknowledge me or anything," Whittaker said. "And I started to build up some narratives in my own head about well I wonder why this man doesn't like me."

But then he noticed one simple gesture from his neighbor that he said made him cry. It changed everything. So he went across the street to finally meet and talk to his neighbor, James Martin.

As a symbolic gesture, Martin had decided to take one of the decorative white rabbits in his front yard and paint it black.

"Honestly while he was painting it, I started to tear up," Whittaker said on the video.

"I wanted to try to understand how to explain it to the neighborhood without being controversial," Martin told him.

So with one bunny, two neighbors who had never met, but lived beside each other for years, were brought together to have their first conversation.

"I've always seen these and I wanted to know, why did you paint that one black?" Whittaker asked Martin.

He says Martin's response was kind and inclusive, and his simple gesture taught him something special.

"My mother hired a black lady to keep the house up, laundry, food, cooking, raise me, all that stuff. She taught me how to do everything. And I never felt any indifference towards her," Martin said.

"One thing we can't do is outlive life," Martin said choking up. "So the time we're here we have to live with whoever our neighbors are."

In just one moment, because of one simple act, a misunderstanding was ended, and racial barriers came down.

Whittaker concluded, "I'm so grateful that he took the opportunity to have that conversation deeper with me than maybe I was expecting."

So Is It Wise to Support 'Black Lives Matter'?

In an interview with CBN's Newswatch program on Friday, Whittaker talked more deeply about the questions he has been receiving about the Black Lives Matter organization.

"My Instagram following and social media following is predominantly a white, evangelical, conservative audience," he told CBN News anchor Mark Martin. "So I think when they started seeing me speak out, and say the term 'Black Lives Matter,' I think a lot of people started saying, 'Well, wait a second. Does that mean that you support the organization by saying that?'"

"What I did was put out a video that's gotten over 100,000 views that explains how Christians can say the term 'black lives matter' without necessarily supporting the organization. That's up to an individual Christian if they want to do that. But I do believe they can be two autonomous things that you can do," Whittaker said.

"The first thing we all need to do is to get on our hands and knees and petition on behalf of those who've had injustices against them. Prayer is absolutely important," he noted. "But I also believe, we have to have action behind our intention that is more than just prayer."

"Yes, prayer changes things," Whittaker told CBN News. "But as you would go to the doctor if you were sick, and not just pray about it, I think we've got to look at the natural and the things we do in our natural as the help, and the supernatural our God is our hope. So our hope is in the natural, and our hope is in the supernatural. So I think if we can take that, then we can defeat this."