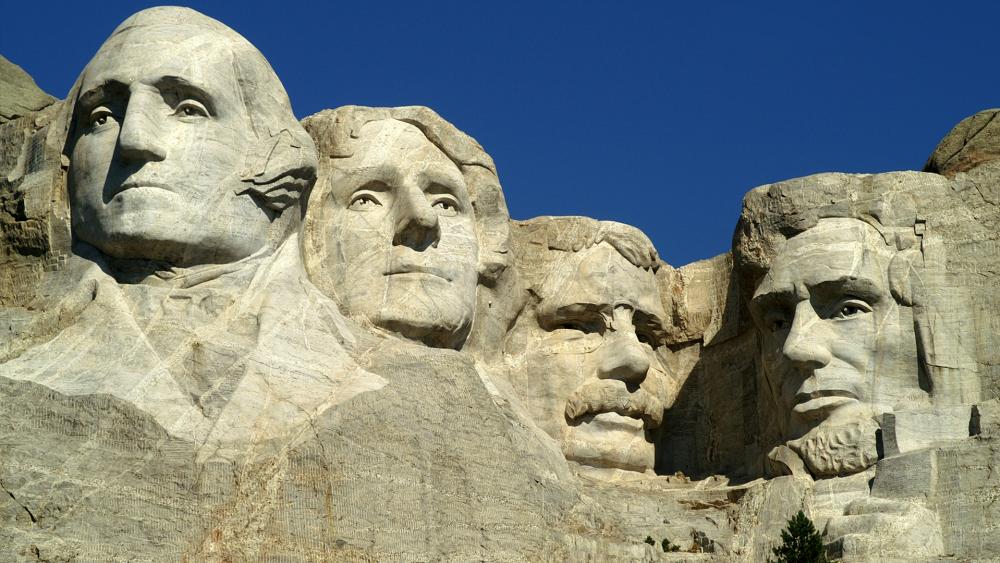 Statues and monuments are being torn down from coast to coast these days – even a statue of George Washington has been toppled by rioters while other activists are trying to remove an Abraham Lincoln monument. Since they're both on Mt. Rushmore, some are wondering how long it will be before calls rise for the destruction of that iconic monument too.

"Not on my watch," South Dakota Gov. Kristi Noem tweeted in response to commentator Ben Shapiro's rhetorical question about whether Mt. Rushmore is next on the list of historical monuments slated for destruction by the so-called "woke, historical revisionist priesthood" that is trashing and torching emblems of America's past all around the country.

Now President Trump plans to lend his support to Noem and Mt. Rushmore by launching the celebration of America's birthday this year at the South Dakota mountain.  It comes at a time when historical monuments from Christopher Columbus to Ulysses S. Grant to George Washington, and even to Jesus Christ, have been toppled, torched, or threatened around the country by anti-American radicals.

Mt. Rushmore, called a "shrine to democracy," shows four faces from America's past, created by dynamite blasts and carved into the stone of the mountain over a period of fourteen years from 1927 to 1941. It represents four phases in American growth and development. The face of George Washington represents the founding of America, Thomas Jefferson symbolizes American expansion westward, Abraham Lincoln stands for the preservation of the Union and ending slavery, and Theodore Roosevelt represents the period inaugurating industrial innovation and economic development that he championed.

Some Native American activist groups see it differently and say Mt. Rushmore is a monument to "white supremacy" and "racism" erected on land stolen from the Lakotas, tribes indigenous to North and South Dakota, and they actually do want to see it destroyed. Other Native Americans say they simply want to secure their part of the prosperity enjoyed in America and envied by the world.

Captioning her appearance on Fox & Friends Wednesday morning in a tweet, Governor Noem made clear where she stands on the destruction of historical monuments, particularly Mt. Rushmore.
"The men on Mt. Rushmore helped make America the greatest country in history. They weren't perfect; nobody is," she added. "But we should learn from their example and work together to accomplish their dreams for our country."

She acknowledged to the "Fox & Friends" audience that there have been threats online that "far-left activists" possibly have Mt. Rushmore next in their crosshairs for destruction.

"What my message is, is that this is no longer about equality," she said referring to the protests against the police killing of George Floyd. "This is a radical rewriting of our history, and in South Dakota, we won't stand for it."

"This is a national monument," the governor continued. "The more we focus on the flaws of these men that are on our mountain, the less likely we are to recognize the virtues and the lessons we can learn from their lives."

"So that really is the message that I have for South Dakota, that loves this mountain and Mount Rushmore," the governor stated.

These are welcome words to millions of Americans concerned about the "cancel culture" bent on eradicating symbols from American history, and whose concerns have been met with virtual silence and little pushback from many politicians. While many acknowledge the sins in America's past, they also view the violence and destruction as an attack on the very existence of a country that has made significant positive changes through the years, and whose aspirations of "liberty and justice for all" are certainly worthy of celebration this July 4th.

President Trump is expected to sign an executive order this week authorizing law enforcement to arrest those trying to deface or destroy monuments on federal land, and called for the maximum prison time allowed by law for those found guilty of such destruction.

"We should learn from the history," Trump told Fox News in a taped interview broadcast Tuesday. "And if you don't understand your history, you will go back to it again."

On July 3rd the President plans to be at Mt. Rushmore to celebrate America's Independence Day, accompanied by a traditional flyover and fireworks display – the first at the monument since 2009.