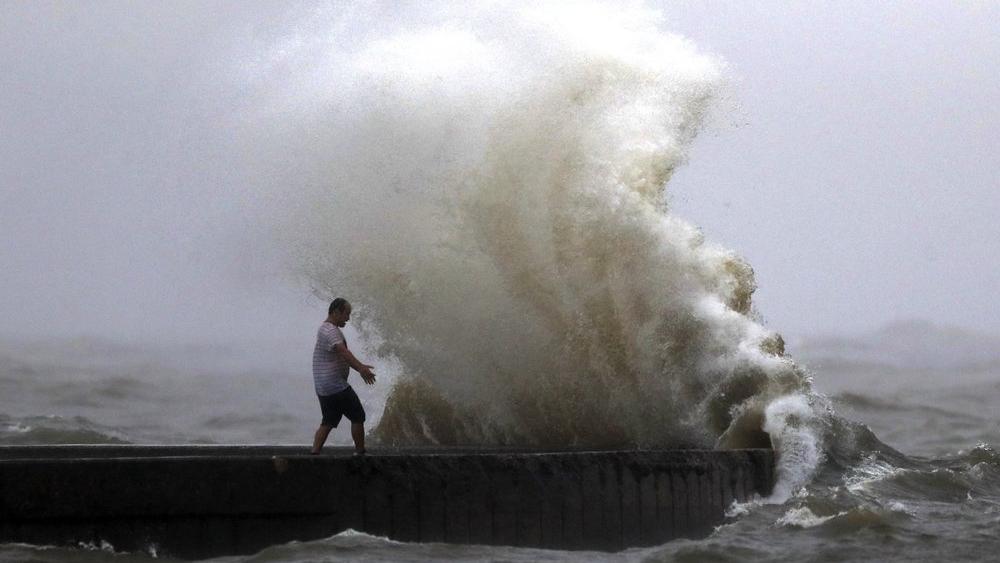 The lopsided storm moved ashore between the mouth of the Mississippi River and the barrier island resort community of Grand Isle, which had been evacuated a day earlier.

Residents of waterside communities outside the New Orleans levee system — bounded by lakes Pontchartrain and Borgne — were urged to evacuate Sunday afternoon because of their vulnerability to an expected storm surge.

Water covered the only road to Grand Isle by Sunday. It was a similar story in low-lying parts of Plaquemines Parish at the state’s southeastern tip, said shrimper Acy Cooper. “You can’t go down there by car,” he said Sunday of one marina in the area. “You have to go by boat.”

Cristobal packed top sustained winds of 50 miles per hour (85 kph) winds nearing the coast but was not expected to reach hurricane strength. Forecasters warned, however, that the storm would affect a wide area stretching roughly 180 miles (290 kilometers).

In Florida, a tornado — the second in two days in the state as the storm approached — touched down about 3:35 p.m. south of Lake City near Interstate 75, said meteorologist Kirsten Chaney in the weather service’s Jacksonville office. There were no immediate reports of injuries. The storm splintered and uprooted trees and downed power lines.

Rising water on Lake Pontchartrain pushed about two feet of water into the first floor of Rudy Horvath’s residence — a boathouse that sits on pilings over the brackish lake. Horvath said he and his family have lived there a year and have learned to take the occasional flood in stride. They’ve put tables on the lower floor where they can stack belongings above the high water.

“We thought it would be pretty cool to live out here, and it has been,” Horvath said. “The sunsets are great.”

Rain fell intermittently in New Orleans famed French Quarter on Sunday afternoon, but the streets were nearly deserted, with many businesses already boarded up due to the coronavirus.

Daniel Priestman said he didn’t see people frantically stocking up as he did before other storms. He said people may be “overwhelmed” by the coronavirus and recent police violence and protests.

They seemed “resigned to whatever happens - happens,” he said.

At one New Orleans intersection, a handmade “Black Lives Matter” sign, wired to a lampost, rattled in a stiff wind as the crew of a massive vacuum truck worked to unclog a nearby storm drain.

At about 4 p.m. local time Sunday, the storm was centered about 65 miles (100 kilometers) south of New Orleans. Cristobal was moving north at 7 mph (11 kph). With an expected landfall looming in Louisiana, tropical storm warnings stretched from Intracoastal City in Louisiana to the Okaloosa-Walton County line in Florida, the National Hurricane Center said.

Forecasters said some parts of Louisiana and Mississippi were in danger of as much as a foot (30 centimeters) of rain, with storm surges of up to five feet (1.5 meters).

The Sewerage & Water Board of New Orleans said the city’s aging street drainage system had limits, so residents should avoid underpasses and low-lying areas where water can pool during inevitable street flooding.

The Louisiana National Guard had dozens of high-water vehicles and rescue boats ready to go across south Louisiana. Three teams of engineers were also available to help assess potential infrastructure failures, the Guard said in a news release.

In Biloxi, Mississippi, a pier was almost submerged by Sunday morning. Squalls with tropical-force winds had reached the mouth of the Mississippi River and conditions were expected to deteriorate, the hurricane center in Miami said.

Jefferson Parish, a suburb of New Orleans, called for voluntary evacuations Saturday of Jean Lafitte, Lower Lafitte, Crown Point and Barataria because of the threat of storm surge, high tides and heavy rain. Residents were urged to move vehicles, boats and campers to higher ground.