Three Signs of Hope in the Midst of Riots, Pandemics and the Tragic Killing of George Floyd 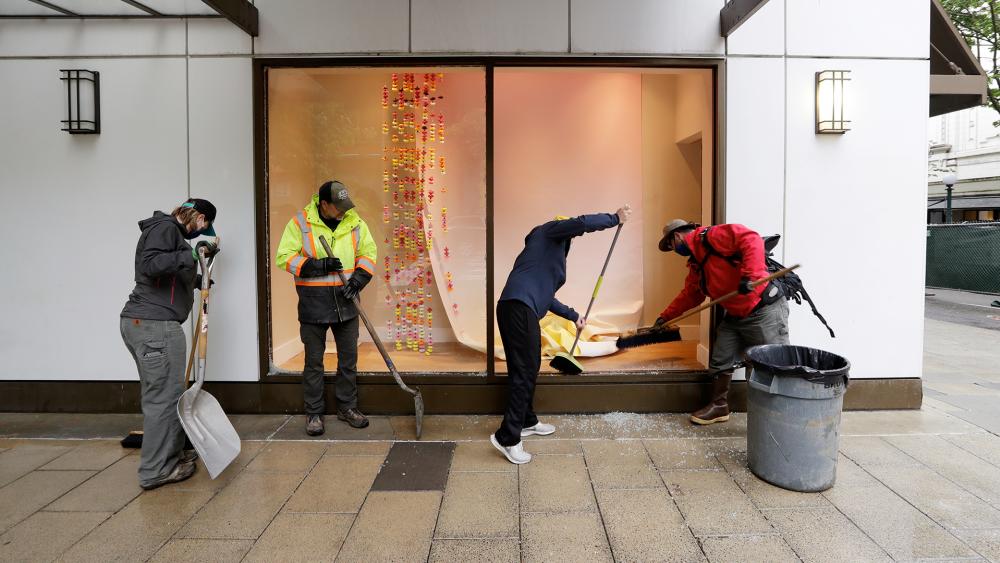 You’d be hard-pressed to find a more divisive time in the modern era for the American psyche than today — on the cusp of reemerging from months-long lockdowns due to the coronavirus pandemic, the country is plagued, yet again, with the echoes of the racial division that harken back to our founding.

It’s nearly impossible to find the right thing to say in times like these. No matter what, our words feel too inadequate or too inarticulate, too jaded or too muted, too reactive, or too repetitive. As believers in Jesus, we are called to hate what is evil, to stand for what is good, and to do our part to usher in the latter.

When we witness injustice of any kind — be it the horrific killing of George Floyd by the knee of a police officer in Minneapolis or the pillagers burning to the ground cities around the country — it’s our distinct responsibility to raise our voices against the first injustice and to do what we can to stop the destruction of the very soil on which restoration must happen.

One week ago, America learned of the fatal injustice handed down to Mr. Floyd. By the week’s end, peaceful protests were drowned out by wall-to-wall media coverage of those burning cities around the country. Today, we’re waking up to see St. John’s Church in Washington, D.C. — a place of worship every president since James Madison has visited — was set ablaze on Sunday night. Thankfully, the damage appears to be minimal.

There is no doubt some portion of the destruction has been carried out by members of the splinter group “Antifa,” though it’d be tough to figure out who, precisely, is responsible for all of it. It’s important for law enforcement to get this situation under control as quickly — and as justly — as possible so the country can get to work solving the problems that perhaps created, and, in turn, perpetuate, what happened last week. The police are not a racist force in the country, but they are human, and as such, the sin of racism creeps into the institution, as it does in every other area of human existence. Those instances must be dealt with swiftly, and it is critical for law enforcement officers in every state to be aware of the fact they have lost the confidence of the communities they are sworn to protect.

But we cannot trade reconciliation and restoration for revenge. Revenge is more injustice without hope, without the promise of tomorrow, without satisfaction, and without peace. Revenge has led to the death of at least one looter and one federal officer, as well as the destruction of numerous minority-owned businesses. In Richmond, Virginia, when protests took a violent turn, a home with a child in it was set on fire and protesters blocked police from reaching the family. With tears in his eyes, Richmond Police Chief Will Smith said firefighters were ultimately able to bypass the rioters and reach the family. “When you take a legitimate issue and hijack it for unknown reasons, that is unacceptable to me,” he said Sunday.

Revenge cannot coexist with peace, nor will it allow space for the love we so desperately need right now. What we’re witnessing in these days is nothing more than the noisy gong and clanging cymbal the apostle Paul warned us about (1 Corinthians 13:1).

In Miami, even as rioters were violently demonstrating, law enforcement officers knelt alongside peaceful protesters as a sign of solidarity and prayer.

“As leaders of this profession, we [chiefs and community] must all do better at improving on our training and protocols so that our efforts towards building and maintaining community trust are not lost or overshadowed,” Miami-Dade Corrections spokesperson Juan Diasgranados told WFLX-TV. “Transparency during this time is key to demonstrating law enforcement’s commitment to serving and protecting our residents with dignity, humanity, and respect.”

At another protest in Oklahoma City, demonstrators gathered together for what one participant described as “a peaceful protest full of cheering, testimonies, and support.”

I pray that 2020 brings a HUGE step forward for the black community. Today we went experienced a peaceful protest full of cheering, testimonies and support. #blacklivesmatter

In Fostoria, Ohio, Police Chief Keith Loreno and an unnamed captain on the force came out Saturday to join with Black Lives Matter protesters. They also knelt down to pray with the demonstrators.

Not only did Loreno pray, he helped amplify the protesters’ voices — literally.

Fostoria Chief of Police brought a megaphone to protesters outside his station. Then he knelt with them in prayer.

Watch the moment, caught on camera, on @13abc at 6 pic.twitter.com/tsRiNb0jol

There are some protesters, too, who are looking for better ways to make a difference — opportunities that don’t involve violence. Watch this powerful encounter between three protesters: one in his mid-40s, one in his early 30s, and one 16-year-old boy.

In the clip, the 31-year-old man pleads with the teenager to find more effective ways to bring about change so he’s not doing the same thing 10 years from now.

Lotta people demanding everybody renounce looting, violence. Absolutely. This man here, does this passionately and articulately..but you need to also hear the other man. In case you don’t want to he says “IM READY TO DIE, BECAUSE OF WHATS GOIN ON.” Please be as passionate about stopping the cause of the pain, not just the result of it. #occupyallstreets

Faith-based leaders all around the country are raising their voices, working to do what they can to shine the light of the Gospel in the midst of this difficult time.

The Southern Baptist Convention, for example, released a lengthy statement on Mr. Floyd’s death, writing, “Followers of Jesus Christ cannot remain silent when our brothers and sisters, friends and/or people we seek to win for Christ are mistreated, abused or killed unnecessarily.”

Others, like Christian author Michael Hyatt, apologized for not speaking out sooner and vowed to educate himself on the issue so he can be better equipped to address injustices in the future.

I’ve struggled with what to say about the recent murder of #GeorgeFloyd, but here are some of my thoughts. #thishastostop I’ll be sharing a few books I’m reading in a following post.

Thank you @bishopjakes for your wisdom on these life altering matters.. the link is available in my bio to the whole conversation.. if you listen with an open mind, you might leave w/ a new perspective. And that is what we desperately need.. #occupyallstreets

Evangelist Franklin Graham, son of the late Rev. Billy Graham, described the killing of Mr. Floyd as “inexcusable” and “so disturbing.”

“He and the other officers on the scene refused to listen and refused to respond,” he wrote. “I hope they have deep regret and remorse for their actions. Police are not the judge and jury. These officers will have to stand before God and the authorities on this earth for what they have done.”

Volunteers and chaplains with the Billy Graham Evangelistic Association, which Graham leads, is on the ground in Minneapolis to speak and pray with protesters there.

Our @BGEA Rapid Response chaplains are ministering in Minneapolis. Pray for peace across our nation.‬

Dr. Tony Evans, an author and famed Bible teacher, wrote it is time for “a national reset to address our cultural pandemic.”

“This is a time to build on a better tomorrow, and not tear down,” he continued. “And while we must address the crisis before us, we must also not allow ourselves to be drawn into a destructive response. I not only affirm, but also encourage the peaceful and righteous protests [and] protestors — as does God (Acts 16:35-40). Voices must speak up (Prov. 31:8). But unrighteous destruction will not accomplish the goal we need to ultimately experience once and for all.”

Despite the destruction taking place around the country, Americans of every color and creed are coming together to help one another.

Armies of volunteers have descended all across the country in the wake of violent rioting to help owners of damaged businesses clean up the wreckage.

An ARMY of volunteers in Minneapolis helping neighbors clean up business damage. “Bring a broom” they were told. What a sight. pic.twitter.com/OjzXpEXCLk

An army of volunteers are tackling the clean up in Center City and Rittenhouse. The healing process has begun. Peaceful protests splintered off into violence and looting last night... this morning were seeing the best of Philly! @6abc #PhillyProtests #PhillyCleanUp pic.twitter.com/JmRJAuoUTZ

Just minutes after the curfew ended, people are already showing up to help clean up the mess from protests in downtown Buffalo overnight. @news4buffalo pic.twitter.com/tr5WMv0s3P

We documented more of that here.

One of those business owners is Korboi Balla, a retired firefighter whose dream restaurant — Scores Sports Bar — was completely ransacked last Wednesday night. All he had to show for his life savings was gone in an instant.

Now, less than one week later, a GoFundMe campaign set up to raise $100,000 to help Balla rebuild has raised just shy of $1 million.

Another encouraging note is the fact that some peaceful protesters are working to hand bad actors, often “Antifa” rioters, over to the police.

After watching some of the violence unfolding in the wake of Mr. Floyd’s death, Atlanta based rappers T.I. and Killer Mike spoke out. While his speech is a little rough around the edges, Killer Mike certainly raised issues worth considering, much of it about the importance of unity.

I mentioned the apostle Paul’s words in 1 Corinthians 13 earlier. Here’s the full context:

We must approach all things, including injustice, with love for one another. Because in pursuing what is right, God promises to never abandon us.

“Turn from evil and do good, and you will live in the land forever. For the Lord loves justice, and he will never abandon the godly. He will keep them safe forever, but the children of the wicked will die. The godly will possess the land and will live there forever.” — Psalm 37:27-29