'Trying to Get Justice for My Father': George Floyd's Son Visits Minneapolis as Protests Across the Country Continue 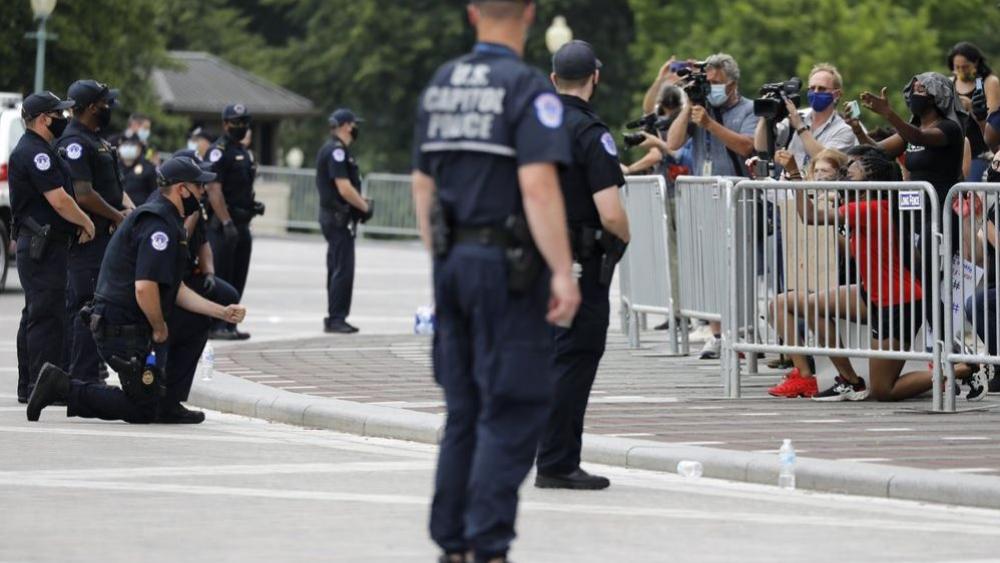 Members of the capitol police kneel as demonstrators gather to protest the death of George Floyd, Wednesday, June 3, 2020, outside the U.S. Capitol in Washington. (AP Photo/Jacquelyn Martin)
6161525607001
'Trying to Get Justice for My Father': George Floyd's Son Visits Minneapolis as Protests Across the Country Continue

On Wednesday, George Floyd's son, Quincy Mason, traveled to the spot where his father took his last breaths. After kneeling for a word of prayer, he didn't say much, but emotions were high.

"I'm united with my family, trying to get justice for my father and no man or woman should be without their father," Mason said.

This came only hours after the mother of Floyd's six-year-old daughter, Gianna, spoke heart-wrenching words, with their little girl by her side.

"I wanted everybody to know that this is what those officers took," Roxie Washington said. "Gianna does not have a father. He will never see her grow up, graduate. He will never walk her down the aisle. I'm here for my baby, and I'm here for George because I want justice for him.

Meanwhile, the state of Minnesota elevated charges against the former officer who was seen on video kneeling on George Floyd's neck to second-degree murder and also charged the three other former officers who were present with aiding and abetting murder, according to court documents.

Secretary of Defense Mark Esper also on Wednesday, condemned the violence against Floyd and other situations like it. Reporters pressed him about why it took him so long to speak out.

Esper claimed he did not know Monday's controversial photo he took with President Trump in front St. John's Episcopal Church was going to happen before it did.

The Trump administration has been widely criticized for using rubber bullets and tear gas to clear the streets allowing the President to walk to the church for the photo opp. Trump said tear gas was never used despite what some say was captured on cell phone video.

Esper also underscored that while the National Guard was there to assist police, no guard members engaged in any tactics.

Meanwhile, protests march on more than a week after Floyd's death.

Overnight, there was a face-off on the Manhattan bridge with police enforcing the new 8:00 pm curfew. They closed both ends of the bridge with a massive group trapped in between before finally allowing them to exit peacefully.

While there were tense moments across the country, protests generally remained non-violent, including one in Kentucky. It was home to Breonna Taylor who was shot to death in her own home by officers serving a no-knock warrant.

"We've been chanting. I've been keeping making sure everyone doesn't approach the police because we don't want to incite a riot," said protest organizer Kelly Bundy. "We don't want to do that. We want them to hear us. That's all we want."