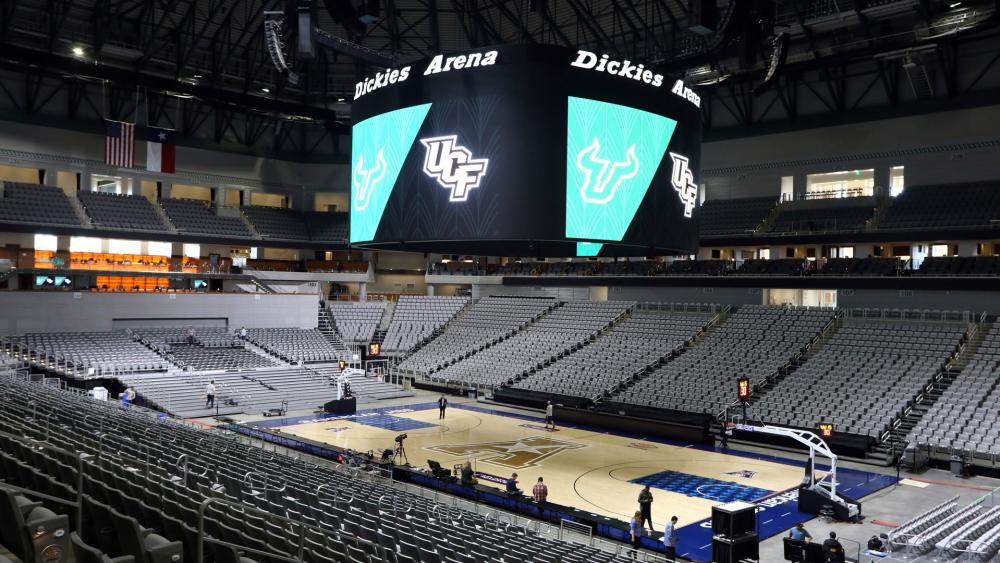 in the American Athletic Conference tournament were canceled Thursday, March 12, 2020

Add the NBA, MLB, NHL, MLS, NCAA's "March Madness" basketball tournament, NASCAR, and Coachella to the growing list of major events that are being canceled, postponed, or modified as the coronavirus outbreak continues to spread across the US. Organizers and officials don't want to risk holding events where the virus could spread to large numbers of people.

The NBA kicked off a major round of professional sports cancellations by announcing Wednesday night it's suspended all games indefinitely after one player on the Utah Jazz tested positive for the virus.

“It's a very serious time right now," Miami Heat coach Erik Spoelstra said. “I think the league moved appropriately and prudently and we'll all just have to monitor the situation and see where it goes from here."

Thursday afternoon the NCAA completely canceled their basketball tournaments known as "March Madness". Earlier, the NCAA had announced plans to still hold the tournaments but without any fans in attendance.

The hugely popular Coachella music festival is being postponed all the way to October. Coachella, which usually attracts up to 100,000 attendees per day, had been planned for April.

And popular game shows like Jeopardy! and Wheel of Fortune will be taping episodes without a studio audience, NBC News reports.

Management recognized that many of their audience members come from all over the world and travel by aircraft.

'Jeopardy!' and 'Wheel of Fortune' will not tape in front of a live audience for the foreseeable future "out of an abundance of caution," source close to the shows says. https://t.co/4oukm82Nhr

A church in Washington, DC canceled their services for the first time since the 1800's after a priest tested positive for the coronavirus. Rev. Timothy Cole with Christ Church in Georgetown became the first confirmed case in the district.

READ: 500+ DC Churchgoers Urged to Self-Quarantine After Their Priest Tests Positive for Coronavirus

An organist at Christ Church also tested positive for the virus.

BREAKING: A D.C. priest has Coronavirus. He offered communion and shook hands with more than 500 worshippers last week and on February 24th. All worshippers who visited the Christ Church in Georgetown must self-quarantine. Church is cancelled for the first time since the 1800's

And Boston's St. Patrick's Day parade that was scheduled for March 15 has been canceled.

Boston Mayor Marty Walsh tweeted, "Boston's St. Patrick's Day Parade, scheduled for 3/15/20, is being canceled. This decision is being made out of an abundance of caution to ensure that we are doing what is needed to keep the residents of Boston safe and healthy."

Boston's St. Patrick's Day Parade, scheduled for 3/15/20, is being cancelled. This decision is being made out of an abundance of caution to ensure that we are doing what is needed to keep the residents of Boston safe and healthy. pic.twitter.com/JzO9v4LZHH

Organizations are continuing to update their social media sites with news of cancellations and the precautions they are taking.

In a statement on their website, The Ivy League wrote that the upcoming Ivy League men's and women's basketball tournaments were canceled.

"We understand and share the disappointment with student-athletes, coaches and fans who will not be able to participate in these tournaments," Ivy League Executive Director Robin Harris said. "Regrettably, the information and recommendations presented to us from public health authorities and medical professionals have convinced us that this is the most prudent decision."

The Navy Times is reporting that the public is banned from attending a Naval graduation in Great Lakes, Illinois where nearly 1,000 sailors are expected to graduate from boot camp.

Lt. Cmdr. Frederick Martin said they "will continue to monitor the situation and consult with medical experts to decide when it is appropriate to resume guest attendance at graduation ceremonies. There are currently no confirmed cases of COVID-19 among students at either command, and both have robust screening processes in place for those who arrive each week."

EXCLUSIVE 'Protect Those Most at Risk': US Surgeon General Stresses Preparedness Over Panic

'For God has not Given Us a Spirit of Fear': Churches Respond with Practical Solutions to COVID-19 Outbreak
CBN News Email Updates