Neither Refugees Nor Asylum Seekers: The Real Reason These Migrants are Coming to the US Illegally 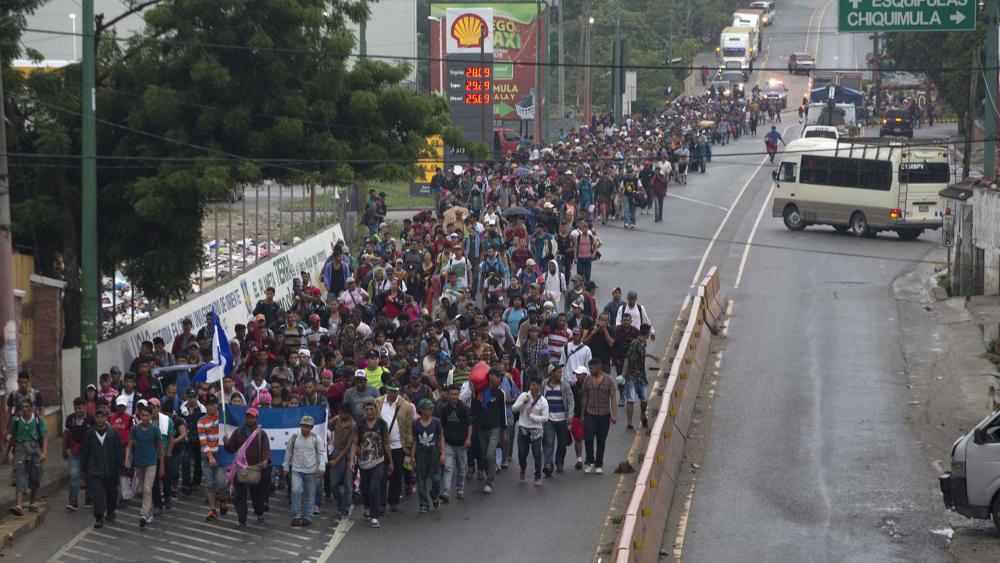 YALAMBOJOCH, GUATEMALA – Another migrant caravan from Honduras was recently turned back at Mexico's southern border by Mexican authorities under pressure from the Trump administration to curb illegal immigration. These migrants admit they are coming for economic reasons.

Ronnie Waldo Ortiz Murillo, a migrant from Tegucigalpa, Honduras said, "We want to cross over (the river) to have a stable job, and something to, as we say, 'change the economy we have.'"

The Real Reason Most Migrants Come to the US

But wanting a better job isn't a valid reason to claim asylum. So many of these migrants will do whatever they must to get to the US border.

"Through the year thousands of migrants will come here, we could come again. If they send us back to Honduras, we'll come again," said Santia Ismael Silva Aguilar, also traveling from Tegucigalpa.

Todd Bensman is a Senior Fellow at the Center for Immigration Studies, specializing in issues surrounding the US Southern border.

"What all of us know from the media over the past couple of years is that the reason that Guatemalans and other Central Americans are leaving their homes and going to the United States is that they are under dire threat from gangs and criminal elements and violence and persecution and those sorts of things, and so we must have sympathy for them because they have to live," Bensman said.

I joined Bensman in Central America recently to gauge the impact of irregular migration. Many Guatemalans heading toward the US come from the central highlands, a fertile and peaceful region.

In 2018 more than 115,000 Guatemalans made the perilous journey. The town of Yalambojoch is typical of this region. The town once held nearly 2,000 people. But today, the streets are eerily empty and quiet, with only a few residents to be seen outdoors. The town's three churches are largely empty and the high school closed last year. We went looking for the town's mayor to find out what happened.

"Here in our town, there are only about 200 people left. Everyone else has gone to the United States," Mayor Francisco Pais told us.

"There's almost no one left to do the work in the community. Things aren't getting done because all the able-bodied men went to the United States."

Yolambojoch is a very safe and tranquil place. There hasn't been a murder here for more than 40 years. So if it's inexpensive to live here, and it's a safe, tranquil place to live and raise children, why do so many people want to leave?

Leaving to "Keep Up with the Joneses"

"People are telling us about something entirely different as a motive for going to the United States, and it has to do with envy. What I mean by envy, particularly, is house envy," Bensman continued. "American dollars being sent back to the families here have been poured into huge, beautiful houses."

Guatemala receives more than ten billion dollars a year in remittances from its citizens who are living in the United States and sending their money back home. And a lot of that money – at least in this town – is being used for home construction. The people that are working in the United States send money to their family members and what few men are left in this town are very busy constructing houses. Two homes we saw under construction are 2,500 square feet. Many Guatemalans appear to be achieving the American dream by moving the American dream back to Guatemala.

The Dream? To Build a Nice House Back in Guatemala

Marcus Domingo's sons are in Missouri, working jobs where they're paid "under the table" and sending enough money home to build both of these houses.

"See, the problem here is there aren't any economic resources, no jobs for us, it's only in the United States where there's work that pays enough to do this because Guatemala is a poor country," Domingo said.

"Right now our dream is for each of us to build our own house so we can have a good life, buy a little piece of land, and put a little money in the bank so that we can better our situation. Everyone sees that some are building all this and everyone became preoccupied with fighting to have one for themselves," he said.

No Government Persecution – Just the Dream of a Better Life

While Bensman doesn't begrudge anyone pursuing a better life, he says there's a word for what these Guatemalans are doing if they are entering the US by claiming asylum. It's called fraud.

"There are no police officers here, they don't need police officers here. So you can't claim any sort of government persecution here," Bensman explained. "The people who live here will tell you that. Nobody here thinks there was government persecution in sending their sons and daughters to the United States. That, in a sense, is fraud if that's what they are telling American border patrol at the border. Most of them are saying that, though. They are being coached to say that. And that's pretty much how they get in."

While the children of Yalambojoch may have better houses to live in, most of them have not seen their fathers in several years, and it will likely be several more before the men return home. That fact might leave many of these families wondering if the beautiful house was worth the cost.