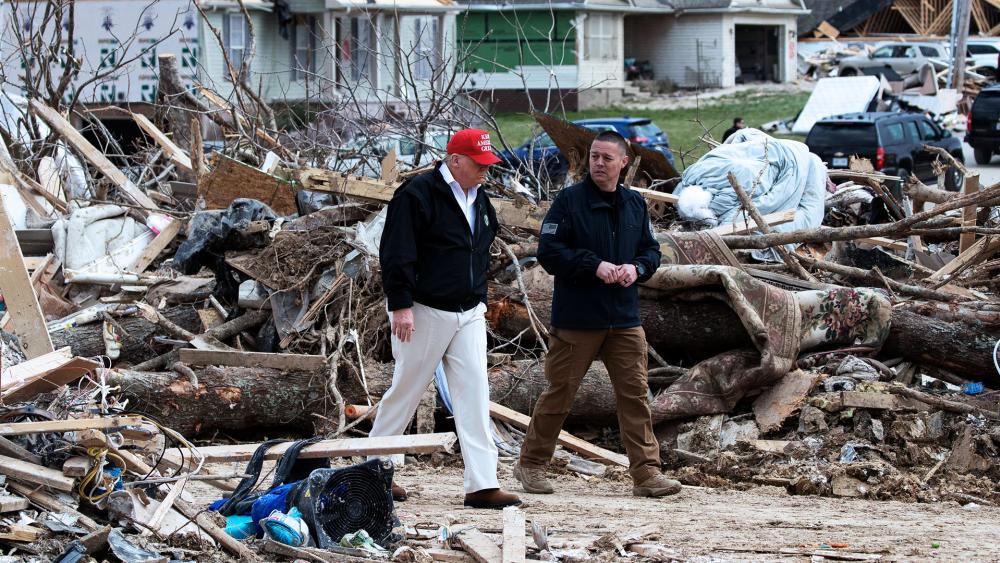 ABOVE: Donelson Christian Academy was one of the facilities in Nashville destroyed by Tuesday's tornadoes. Keith Singer, the school's headmaster, appeared on the Friday afternoon edition of CBN's Newswatch to talk about how the community is turning to God as they come together for recovery. Newswatch is seen weekdays on the CBN News Channel.  For a programming schedule, click here.

President Donald Trump toured storm-ravaged Tennessee neighborhoods on Friday where at least 24 lives were lost and homes destroyed by tornadoes that swept through parts of the state earlier this week.

The tornadoes struck in the middle of the night on Tuesday, one of them cutting a 50-mile path of destruction in the Nashville area.

Then a monster tornado touched down, devastating communities in its path east of Nashville, causing the most deaths. The National Weather Service said that it was an "extreme" EF-4 tornado, unleashing winds between 166 and 200 mph. Local officials have said it was on the ground for about 2 miles.

It killed 18 people, including five children under the age of 13. Many more people were injured, some critically.

President Trump was joined by Tennessee Gov. Bill Lee, US Sen. Marsha Blackburn and other top state officials during the visit.

"I have a message for the families of those that lost their lives: We love them. They're special people. It's an incredible place — incredible state, tremendous heart," Trump said during a news conference in Cookeville, in front of the wreckage of a home.

Trump approved a disaster declaration Thursday, making federal funding available to those affected by the storms in Davidson, Putnam, and Wilson counties, the White House said. More assistance may be designated as damage assessments continue.

Earlier this week, Trump described the Tennessee tornadoes were "horrible" and "vicious."

"Our hearts are full of sorrow for the lives that were lost," he told a meeting of county officials from across the US earlier this week. "Those tornadoes - I've seen many of them during a three-year period, and I've gotten to see the results. And they are vicious if you're in their path."

CBN's Operation Blessing is already on the scene in Tennessee to work on clearing debris and to help those in need.  If you would like to help disaster victims, click here.

'Praise God the Tornado Came Through at 12:30 at Night'

One of the facilities that were hit hard by Tuesday's tornadoes was the Donelson Christian Academy located in Nashville. Keith Singer, the headmaster of the school, told CBN News on Friday, that the school will rebuild.

"Here's the blessing in this whole thing," Singer said while appearing on CBN's Newswatch on Friday. "Praise God that the tornado came through at 12:30 at night. Usually, there's a thousand people on this campus, hundreds of cars, and when the tornado hit, there was not one soul on our campus."

"And so we're blessed. Not one of our kids were hurt in that. Some of our families are hurting. Some of our families in our school community had some devastation to their homes. But in the middle of all of that, we feel blessed that the tornado came when it did and not at 12:30 in the afternoon."