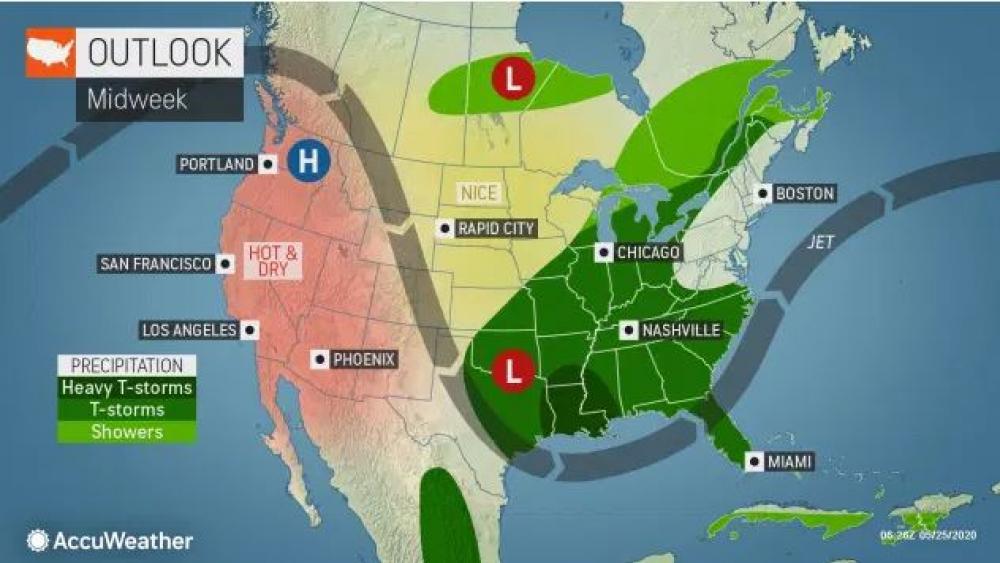 The threat for flooding will escalate across the south-central United States this week as rounds of heavy rain and storms batter the region.

Many cities across the South Central states have already recorded more than their average amount of rainfall for the entire month of May.

Less than two weeks ago, several locations, including Dallas and New Orleans, received nearly a month's worth of rain over the course of two to three days.

This week, many of the same locations may be able to repeat that feat as another heavy rain event sets up over the region.

"The rainy pattern will come courtesy of a system high in the atmosphere that will become cut off from the main flow of the jet stream," AccuWeather Senior Meteorologist Ryan Adamson said. "When this happens, unsettled weather can linger for several days in the same general location."

Rounds of rain are expected to impact portions of Texas, Oklahoma, Arkansas, Louisiana, and Mississippi, from Memorial Day through midweek.

"While it will not rain constantly this week, rain can fall at almost any time in the region," Adamson said.

Rain will be heavy at times through midweek and will likely produce flash flooding issues at times across the area.

"The stalled storm will tap into moisture from the Gulf of Mexico, which will add to the intensity of rainfall rates across the region and increase the potential for flash flooding," AccuWeather Meteorologist Renee Duff said.

Over the course of the week, a major concern will be the development of training thunderstorms.

"Training thunderstorms are storms that repeat over the same areas and maximize the likelihood of flooding," Duff said.

Locations caught under these repeating downpours will have the greatest opportunity to approach an AccuWeather Local StormMax™ of 8 inches of rainfall.

Last week, a separate storm system tracked slowly across the Midwest, down through the Appalachians and finally exited off to the Atlantic Ocean. This storm unleashed periods of very heavy rainfall that led to dam failures in Michigan, among numerous reports of other flash flooding issues.

Rainfall along that same scale is likely at times over the South Central states this week, leading to widespread flash flooding issues, especially in low-lying and poor drainage areas.

"Motorists are reminded to never attempt to drive through floodwaters, as the water is likely deeper than it appears and the roadway underneath could be compromised," Duff said.