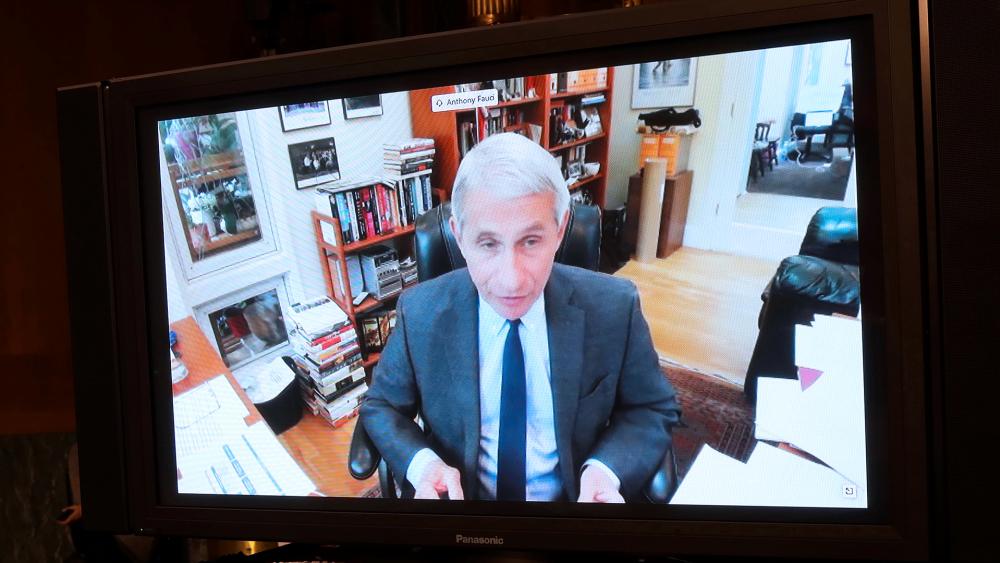 Dr. Anthony Fauci, director of the National Institute of Allergy and Infectious Diseases speaks remotely during a virtual Senate Committee for Health, Education, Labor, and Pensions hearing, Tuesday, May 12, 2020. (Win McNamee/Pool via AP)

In a highly unique day of business on Capitol Hill, senators held a part virtual, part in-person hearing asking the nation’s top health experts about the overall coronavirus response and strategy for reopening the country.

Dr. Anthony Fauci and other health officials testified via videoconference before the Senate Committee on Health, Education, Labor, and Pensions and warned of serious consequences if cities and states move into phase one of reopening before meeting suggested guidelines to do so.

“My concern is that we will start to see little spikes that might turn into outbreaks,” said Fauci.

Fauci warned without sufficient control over the virus, cities, and states could be set back economically and socially.

“There is no doubt, even under the best of circumstances, when you pull back on mitigation, you will see some cases appear,” testified Fauci. “It's the ability and the capability of responding to those cases with good identification, isolation, and contact tracing will determine whether you can continue to go forward as you try to reopen America.”

Top of mind for many senators was if schools and universities can safely reopen in the fall. Fauci cautioned without having treatments available or a vaccine, the re-entry of students in the fall term “would be a bridge too far”.

“Even at the top speed we're going, we don't see a vaccine playing in the ability of individuals to get back to school this term,” cautioned Fauci.

“I think the one-size-fits-all, that we're gonna have a national strategy and nobody is going to go to school is kind of ridiculous,” claims Paul.

Paul suggests the decision to reopen should lie with local school districts.

“As much as I respect you, Dr. Fauci, I don't think you are the end-all, I don’t think you’re the one person that gets to make a decision,” said Paul. “We can listen to your advice, but there are people on the other side saying there’s not going to be a surge and that we can safely reopen the economy and the facts will bear this out. But if we keep kids out of school for a whole year, what’s going to happen is the poor and underprivileged children who don’t have a parent to teach them at home are not going to learn for a full year.”

Fauci responded by saying his job is to advise according to scientific evidence, not economic or social impact.

“I’ve never made myself out to be the end-all and only voice in this. I’m a scientist, a physician, and a public health official,” responded Fauci. “I give advice according to the best scientific evidence. There are a number of people that come into that and give advice that are more related to the number of things you spoke about, about the need to get the country back open again.”

But Fauci warned Paul there is still a lot unknown about the virus – particularly when it comes to its effect on children.

“We really need to be very careful particularly when it comes to children. Because the more and more we learn, we’re seeing things that this virus can do that we didn’t see from the studies in China or in Europe,” said Fauci. “For example, right now children presenting with COVID-19 who actually have a very strange inflammatory syndrome, very similar to Kawasaki syndrome, I think we ought to be careful if we are not cavalier, in thinking that children are completely immune to the deleterious effects.”

Fauci also testified that he does not think the US has the virus under control yet and believes the death count is likely higher than what we’ve recorded thus far.