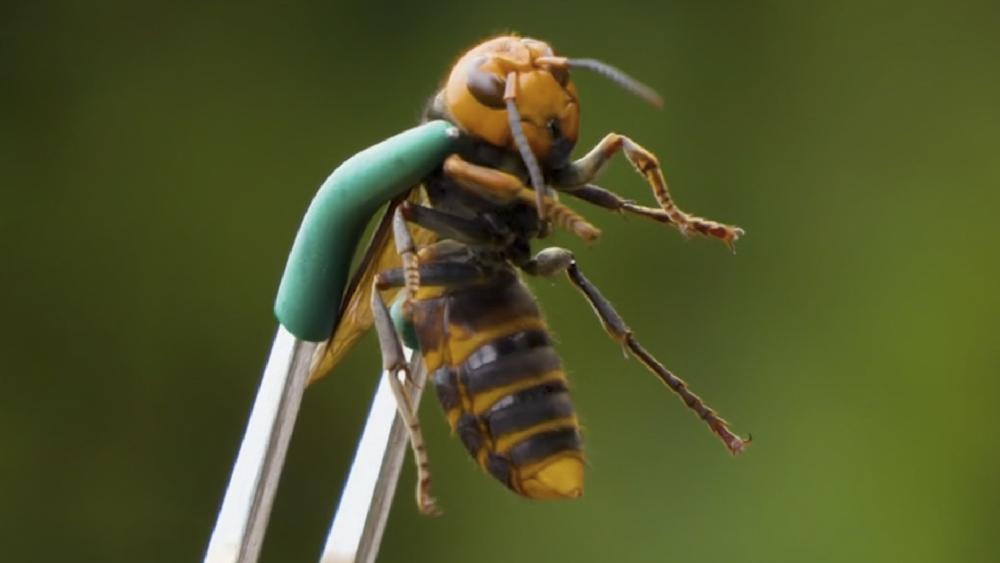 A close up of an Asian giant hornet or "murder hornet." (Image credit: CBN News)

If you thought staying inside was a good idea during the COVID-19 pandemic, here's another potential reason to stay inside. A giant insect called "the murder hornet" – which kills bees – has made its way to the US and has put scientists on high alert to find and stop the invasive species.

The hornet is native to places like Japan, South Korea, and Taiwan, but was detected in Washington state last year.

It can grow up to two inches in length. That's roughly five times the size of a bee. The hornet's stinger is strong enough to penetrate a beekeeper's suit.

Their sting can be fatal to humans if you are allergic. And the hornet's sting can carry a punch.  Animal expert and YouTube personality Coyote Peterson was voluntarily stung by one in 2018 for his show "Brave Wilderness."

"If you can imagine getting yourself that Mike Tyson took a shot at your jaw, that is kind of what it feels like," Peterson told ABC News.

In Japan, the hornets kill dozens of people each year.

But these hornets prey on the honey bees that pollinate much of our food.

They can destroy an entire beehive in a matter of hours. Ted McFall is a beekeeper who lives in Washington state where the sightings first happened. He told ABC News the hornets decimated his entire honeybee colony.

"Never have I seen a bee slaughter in the way that this hive had been slaughtered," McFall said.

Experts are working to track them down before they destroy much of the US bee population and reach a point that they can't be eradicated.

"This is our window to keep it from establishing," said Chris Looney, an entomologist at the Washington State Department of Agriculture told the New York Times. "If we can't do it in the next couple of years, it probably can't be done."