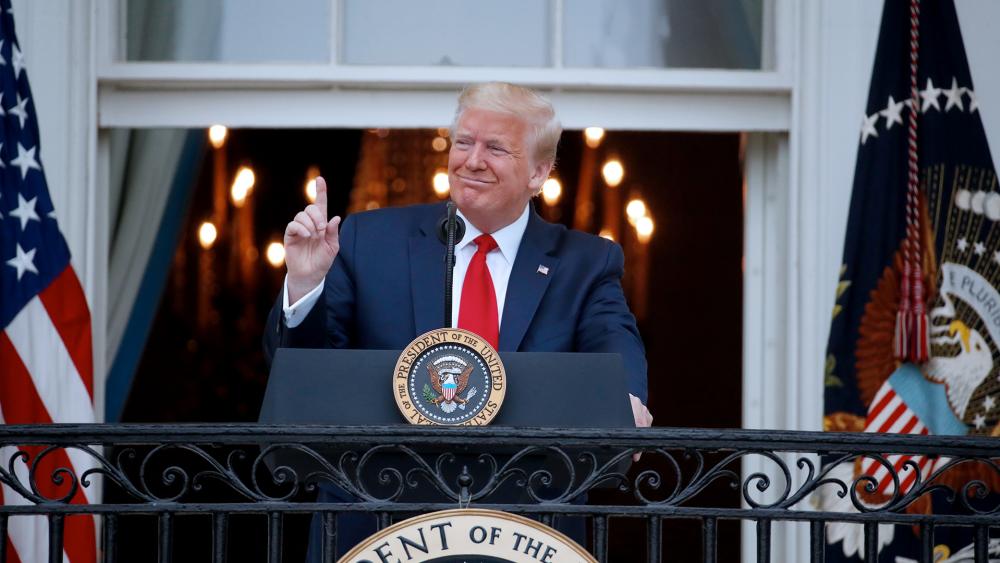 President Donald Trump speaks during a "Rolling to Remember Ceremony," to honor the nation's veterans and POW/MIA, from the Truman Balcony of the White House, Friday, May 22, 2020, in Washington. (AP Photo/Alex Brandon)

On Friday morning, President Donald Trump participated in a "Rolling to Remember" ceremony at the White House honoring our nation's veterans and prisoners of war who are still listed as missing in action.

During a rain shower, Trump addressed the Rolling to Remember motorcycle group gathered on the South Lawn. He reminded them that military veterans are "very special" to the nation, who "will always remember the nearly 82,000 Americans missing in action."

The President also told the bikers that there's still work left to be done on many fronts.

"We have work left. But we have to get it, we have to win the White House. Otherwise, a lot of the great things that we've done, we're going to do great with our economy. We're going to see... you already see it starting to happen. We're trying to get some governors and not opening up, but they'll be opening up pretty quickly," he said.

Trump said he also spoke with the CDC about reopening churches and synagogues across the country.

For the last 32 years, thousands of motorcyclists took part in Rolling Thunder on Memorial Day weekend, to raise awareness of veterans' issues and to honor the 82,000 service members missing in action since WWII.

In 2020, the veterans' organization AMVETS took over the event and led the first annual Rolling to Remember ride to bring attention to veteran suicide.

Due to COVID-19, AMVETS is leading a virtual/at-home Rolling to Remember Ride Challenge to encourage individual riders nationwide to ride 22 miles in their own community to recognize the 22 veterans who die by suicide every day.

Flags to Be Flown at Half-Staff for Next Three Days

President Trump has also announced he will order US flags to be flown at half-staff over the next three days as the American death toll from the COVID-19 pandemic passed 95,000.

Trump said the flags will continue to be flown at half-staff on Memorial Day to honor those in the military who died serving their country.

The President's move to lower the flags to mourn Americans struck down by the coronavirus follows a request from Democratic leaders.

200,00 US Flags Placed on Tombstones in Arlington

And as millions of Americans plan to place flowers at a loved one's gravesite this weekend, the old guard laid more than 20,000 American flags at tombstones in Arlington National Cemetery on Thursday

The tradition is called 'flags in' and has taken place annually since 1948. Each flag is inserted into the ground exactly one boot-length in front of the headstone, and flags are placed at the Tomb of the Unknown Soldier to honor the unknowns.