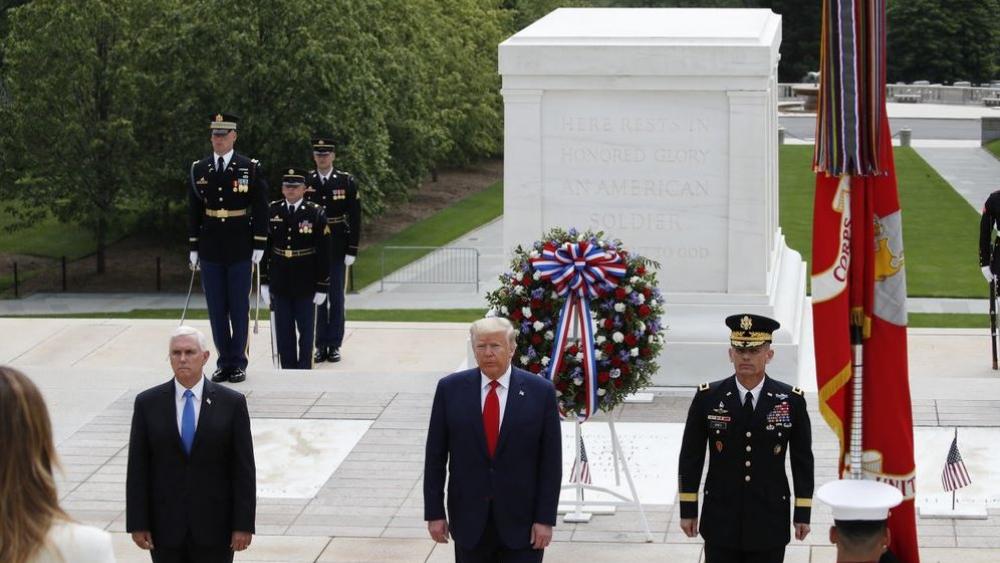 President Donald Trump honored America's fallen service members on Monday as he commemorated Memorial Day in back-to-back appearances in the midst of the pandemic.

"Together we will vanquish the virus and America will rise from this crisis to new and even greater heights," Trump said during a ceremony at Baltimore's historic Fort McHenry. "No obstacle, no challenge, and no threat is a match for the sheer determination of the American people."

Earlier, Trump silently honored the nation's war dead at a ceremony at Arlington National Cemetery, which is currently closed to the public. Presidents on Memorial Day typically lay a wreath and deliver a speech at the hallowed burial ground in Virginia. But because of the pandemic, which is expected to claim its 100,000th American this week, the ceremony looked different this year.

Many attendees arrived wearing masks but removed them for the outdoor ceremony in front of the Tomb of the Unknown Soldier. Trump, maskless as always in public, gave no remarks. He approached a wreath already in place, touching it and giving a salute.

Trump then traveled to Baltimore, to the chagrin of the city's mayor, and noted that tens of thousands of service members and national guard personnel are currently "on the front lines of our war against this terrible virus."

The U.S. leads the world with more than 1.6 million confirmed coronavirus cases and more than 97,000 deaths, according to a tally by Johns Hopkins University.

Trump said brave warriors from the nation's past have shown that "in America, we are the captains of our own fate."

The Fort McHenry National Monument and Historic Shrine is where a poem, written after a huge American flag was hoisted to celebrate an important victory over the British during the War of 1812, became "The Star-Spangled Banner." The fort is closed to the public because of the pandemic.

Watch this short video of the President's visit to Arlington National Cemetery.