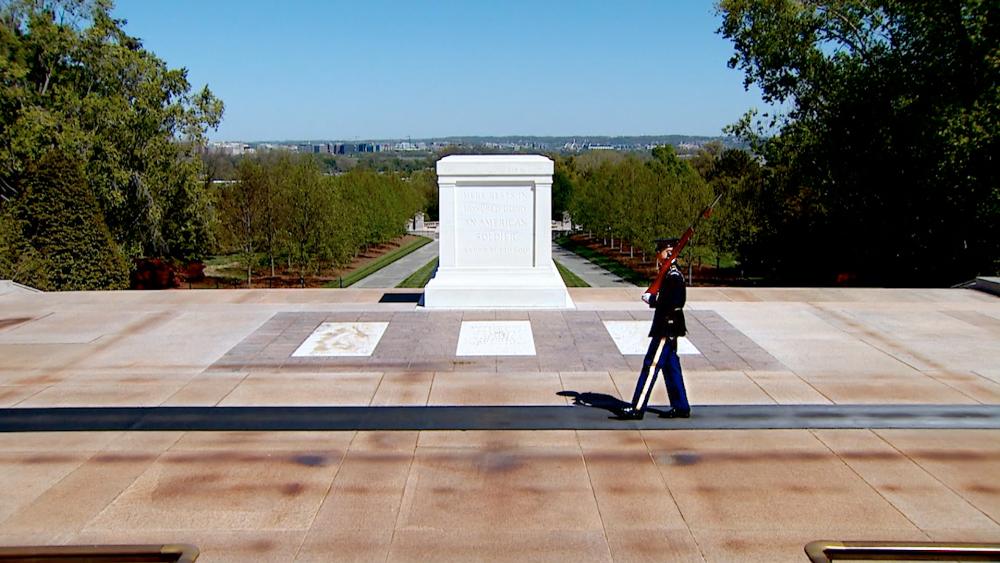 Neither rain, sleet, snow, or a global pandemic can keep the Army's "Old Guard" from carrying out its duty.

For now, Arlington National Cemetery is closed to the general public, with funerals closed to the media. But for the soldiers tasked with guarding and burying our nation's heroes, the mission continues.

The final call plays on, those 24 notes known as "Taps," marks an end to a day on base and a national song of tribute to fallen heroes.

Even in the midst of a pandemic, this remains a place immune to change. From the eternal flame marking the grave of President John F. Kennedy to the Tomb of the Unknown, where "The Old Guard" stands watch over the resting place of unnamed soldiers.

The usual crowds who silently watch this ceremonial changing of the guard are absent now, but the "American soldier known but to God" remains under constant and meticulous watch.

"For us it doesn't matter if it's a hurricane or in this case if it's a pandemic. We are always here, we are always guarding," says Captain Harold Earls, Commander of the Tomb Guard.

Through a hurricane and even during the 9/11 terror attacks, these watchmen have kept a 24-hour-a-day vigil for more than 80 years, and the coronavirus isn't about to scratch that record.

The guards wear masks in close quarters but not while keeping watch. They keep a strict social distance during the changing of the guard and the all-important uniform inspection. It seems fitting that the Old Guard's regimental motto is "Touch Me Not."

Masks are worn now during funeral services and burials, as the nation's veterans and their families continue to receive full military honors.

"The unknowns deserve that, our country deserves that. This place represents the very best of this country. Quite frankly at a time in which we need reminding of what our very best looks like," said Earls.

That very best represented by an elite group of soldiers who make up the oldest active-duty regiment in the US Army.

Beyond the pomp and circumstance, the Third US Infantry Regiment is a fully trained and certified army combat unit.

To serve as a sentinel in what is known as "The Official Escort to the President" is considered one of the Army's highest honors.

For them, the honor is in the mission.