It Started in An Underground Bible Study: Top Regent Academic Officer Traces Roots Back to Family in Colombia 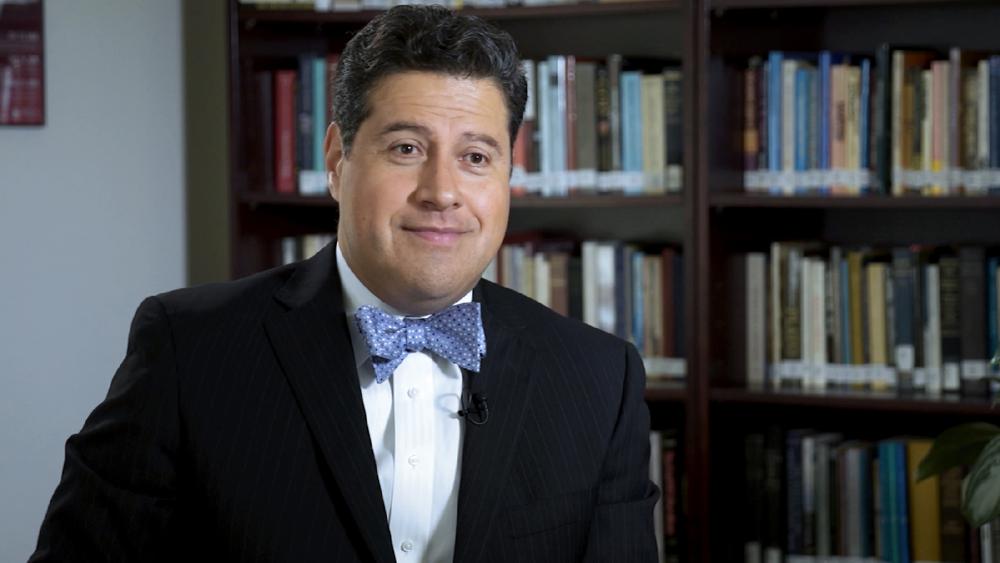 6200704151001
It Started in An Underground Bible Study: Top Regent Academic Officer Traces Roots Back to Family in Colombia

Since he took the helm in 2014, the university has nearly doubled in size and expanded areas of study from 75 to more than 130, including new STEM programs and a cybersecurity track.

Equally impressive, however, is the story of Moreno-Riano's journey and what led him to lead a university with a growth trajectory that has become a model for others.

During a sit-down interview with CBN News, Moreno-Riano traced his story back to the faith of his grandmother. In 1938, the 17-year-old received Christ in an underground Bible study in Bogota, Colombia during an era when becoming a Christian meant inviting persecution and even death.

Her faith would go on to influence her daughter and ultimately, her grandson.

As a child, Moreno-Riano's parents enrolled him in an Assemblies of God school where he accepted Christ during chapel in the third grade.

"I just remember the Lord's voice in my heart saying to me 'you don't know Me and you're in danger of damnation and you need to turn to Me. You need to repent,'" he said.

That clear voice also spoke to him in a Bogota plaza where he first heard Beethoven's Fifth Symphony.

"The Lord spoke to my heart and said 'you're hearing beauty,'" he recounted. "I've said to my students throughout my life that beauty is more powerful than arguments and words and the importance of us then representing and teaching and modeling beauty to students is very important."

Moreno-Riano would need that vision just a short time later when he arrived at age 9 with his parents and brother in snowy Rochester, New York. The goal: a better life for the two boys.

Moreno-Riano says he's begun more recently to appreciate his parents' sacrifice. "I don't think I realized how difficult this was on my parents," he said, recalling how the family came with just two suitcases, a duffel bag, and $300 in his father's pocket.

The family began their new life in the US in 1981, just months after the inauguration of President Ronald Reagan. Moreno-Riano's father was awed by the beauty and smoothness of the presidential transition.

"My father's watching all this and saying 'this is incredible, this peaceful transfer of power and number two – the grandeur of the election and the inaugural ceremonies,'" he remembered.

As an adolescent, Moreno-Riano began to follow politics himself and starting tracking with the threat of Communism and the Cold War.

"I began to read these things and think 'there's no doubt in my mind that there's evil in the world. There's an agenda to destroy America and I can't let that happen," he explained, before chuckling at the notion of a teenage boy trying to save the world.

Still, Moreno-Riano emphasized that his growing love for his new country spurred his desire to defend it.

He also re-dedicated his life to the Lord at age 14 and sensed a call to full-time ministry, however, that might play out.

He worked full-time as a custodian to pay for school expenses and their growing family. Before he graduated, their first son Isaac was born.

Sensing the Lord's call, Moreno-Riano began graduate studies in political science at the University of Cincinnati. A test of his faith awaited him in his first semester when he took a course on Karl Marx, whose sociopolitical theories have inspired communist regimes around the world.

Moreno-Riano began to read Ludwig Feuerbach's The Essence of Christianity for the class, taking in how it sought to destroy the tenets of the faith.

He remembers calling his wife and explaining that he'd be coming home late for the next two weeks in order to deal with the text. Then he remembers praying "Lord, I don't know how to deal with this. Please show me the way. Help me Lord to find a way within this system to demolish this."

At the end of the two weeks, Moreno-Riano says he had figured it out and went on to obtain both an M.A. and Ph.D. in political science.

His scholarly career led him to serve as a fellow at the Foundation for the Defense of Democracies before he landed at Regent in 2006.

Since then, he's authored six books and served as government department chair and dean of the undergraduate school before chancellor Pat Robertson named him executive vice president for academic affairs in 2014.

As a good government scholar, Moreno-Riano went back to the original articles of incorporation that Robertson created for the university when he founded it in 1978.

What he discovered deeply moved him. "This is an institution that was birthed to glorify God – and that shifted my thinking about Regent immediately," he said. "This has to change everything we do at Regent, everything."

That mission infused the strategic growth plan that has almost doubled the student population since Moreno-Riano took the helm. Today, amidst a pandemic, Regent is enjoying another record enrollment year with more than 11,000 students in classes.

"We've been told by many external watchers that this is unheard of," admits Moreno-Riano. "Most institutions don't do this so we're grateful that we're one of those few that are breaking records."

But he refuses to take credit. "I will tell you, it's because God has favored us and provided for us and protected us and shown us the way how to do it," he said.