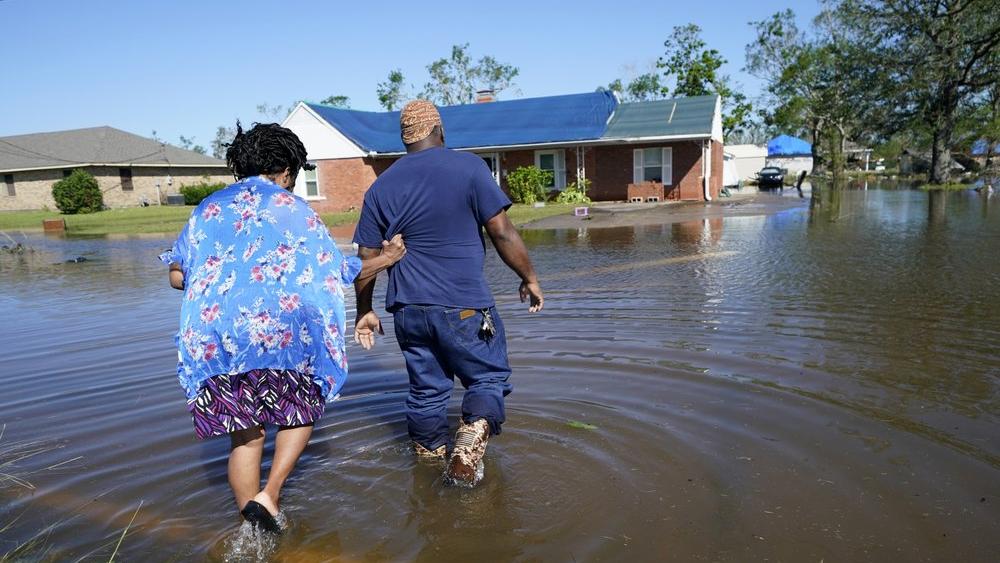 As the remnants of Delta scattered across the Mississippi Valley into Sunday morning, power outages and isolated bursts of severe weather spawned by the storm spread as far east as Georgia.

Delta, a former Category 4 hurricane in the Caribbean and then a major hurricane at Category 3 force later on as it churned across the Gulf of Mexico, became a tropical depression by Saturday afternoon as it passed through western Mississippi, unloading heavy rain as it drifted to the north. Its maximum sustained winds were 30 mph.

Power outages topped out at 800,000 at the peak of the storm as it raged inland. By Sunday morning, there were over 450,000 customers still without power from Texas to Georgia, according to PowerOutage.us. At least 10,000 utility workers were sent out to start restoring power to residents, The Associated Press said.

And, in the days ahead, forecasters say stifling heat and humidity could add more misery to the ongoing cleanup and recovery efforts. On Saturday night, strong storms spawned by the remnants of Delta prompted several tornado warnings across Georgia. Although the center of circulation was west of the area, the storm drew tropical moisture across the southeastern U.S., fueling the rain and thunderstorms.

Hartsfield-Jackson Atlanta International Airport issued a ground stop earlier on Saturday evening amid the inclement weather, and at the National Weather Service Storm's Prediction Center listed two preliminary tornado reports, one in Coweta and the other in Pike County, Georgia, just after 6:20 p.m. EDT.

In Coweta County, Georgia, a high school sustained structural damage as a result of a tornado, and strong storms dealt extensive damage to a homeless shelter in Covington, Georgia, Saturday evening.

As for the residents of southwestern Louisiana, many of whom are still reeling from the aftermath of ferocious Hurricane Laura, they now likely face additional setbacks in rebuilding efforts as officials gather the scope of the damage produced by Delta.

“We fought all night long trying to keep things intact. And with God’s help we made it," Lake Charles resident Milton Wesley told The Associated Press. The Wesley family rode out the storm in their tarp-covered home that was heavily damaged during Laura.

CBN News Contributor Chuck Holton is on the ground providing a firsthand look as he rides out the storm and reports live from the Louisiana coastline. Delta made landfall on Friday evening as a Category 2 hurricane with maximum sustained winds around 100 mph in Creole, Louisiana, roughly 13 miles east of where Laura barreled inland on Aug. 27 as a Category 4 storm. The latter storm had packed winds that matched the strongest hurricane in state history. Delta struck only 43 days after Laura crashed onshore. When Delta made its landfall at 6 p.m. CDT Friday, it became the fourth named storm of the hyperactive 2020 Atlantic season to crash into the state.

Lake Charles, Louisiana, Mayor Nic Hunter said although Delta was a "weaker" storm than Laura, it was more of a water event than a wind event. He said some houses in the area were flooded with several inches of water, and electricity was out citywide.

"Today is not the day to come back to LC if you can avoid it. Allow our public safety and other city personnel to do their job today in starting to pick up the pieces," Hunter said on Facebook.

In an interview on CNN, Hunter said the hit from Delta about a month and a half after Laura's landfall was a "double whammy" for the region. “Add Laura and Delta together and it’s just absolutely unprecedented and catastrophic,” Hunter said, according to The AP. “We are very concerned that with everything going in the country right now that this incident may not be on the radar nationally like it should be.”

Louisiana Gov. John Bel Edwards said no fatalities have been reported in Delta's aftermath, but he warned that dangers remain in the wake of a hurricane. This includes carbon monoxide poisoning for people using generators while power is being restored. Edwards tweeted Saturday morning that Delta left behind "hazards like flooded roads, downed power lines, and displaced wildlife in our communities that no one should take lightly. Everyone needs to remain vigilant, continue to listen to local officials, and be safe."

AccuWeather National Weather Reporter Jonathan Petramala reported signs of wildlife after the storm moved away from Cypermort Point, Louisiana, on Saturday morning. Spotting snake tracks in sand washed ashore from the hurricane, Petramala said, "I have honestly seen more snakes than I want to in a hurricane."

I spy tracks I have honestly seen more snakes than I want to in a hurricane. #HurricaneDelta2020 pic.twitter.com/Sbxr58pXKW

Petramala reported that the hotel where he was staying to cover the storm had been without running water for three days as of Saturday.

At the height of Delta's wrath in Pecan Island, Louisiana, a mobile home that was first destroyed six weeks earlier when Hurricane Laura struck was blown into a road by the storm's ferocious winds. Delta came ashore about 80 miles east of where this footage was shot by a storm chaser named Ryan Darr, Storyful reported. Darr's video showed the home completely blocking a road as it was lashed by high winds and a driving rain.

Matthew Williams, 49, of Lake Charles, rode out the hurricane in his home. He told Reuters that his power had only been restored about a week ago since Laura knocked it out in late August. Remarkably his home escaped damage from both storms, he said.

“Laura was much worse,” Williams told Reuters. “This was more rain than wind.”

State officials urged residents to be mindful of proper generator usage in the event they did lose power. After Hurricane Laura, at least nine deaths were reported due to carbon monoxide poisoning in Louisiana. Officials blamed that on people not using generators safely.

Josh Guillory, the Mayor-President of Lafayette, Louisiana, told Accuweather National Reporter Bill Wadell that roughly 40% of the city was without power as of early Saturday afternoon. His biggest recommendation to residents was to stay off the roads to let crews finish restoration.

"The easiest way to help our power to get restored is to clear those roadways. Let our first responders get out there, and it's not just utility workers, it's ambulance services, fireman, police officers that still need to respond,” Guillory said.

Lafayette resident Amanda Meaux told Wadell that she believed Delta caused the most trouble in the city so far this hurricane season. She was only two months away from finishing payments on her SUV when a tree came crashing down and caused damage. "I moved my car so that the tree wouldn’t hit it, but it still busted out my window and busted the door a little bit," adding that the fallen tree also blocked access to her house "so it’s a jungle to get in and out,” Meaux explained to Wadell.

The destruction already wrought from Laura will likely keep the economic impact from Delta from being worse than it could've been.

The estimated damage total and economic loss due to Hurricane Delta in the U.S. is expected to be somewhere between $4 billion and $6 billion-plus an additional $1 billion of damage that occurred earlier this week in Cancun, according to AccuWeather Founder and CEO Dr. Joel N. Myers.

“Our estimate of the economic damage caused by the storm is primarily due to powerful wind gusts, coastal storm surge, and some flash flooding. Our estimate might have been even higher had it not been for destruction already caused by Hurricane Laura in August. Many families are still using tarps to cover their roofs,” Myers said. “We factor into our estimate damage to homes and business as well as their contents and cars, jobs and wage losses, agricultural losses, infrastructure damage, damage to businesses and their buildings and contents, and the costs of power outages to businesses and residents.” Myers added that the estimate also includes economic losses related to highway closures, evacuations, increased insurance premiums, rescue, and recovery, clean up, and flight cancelations.

Louisiana residents have every reason to be utterly storm-exhausted by this point. Along with being the fourth named storm to hit the state this year, not to mention the two other systems that threatened the area, Delta's landfall marked the 10th Atlantic basin storm to hit U.S. soil this season, a new record. The previous record was held by the 1916 season, according to Colorado State University scientist Phil Klotzbach. Delta was also the seventh storm of the season to hit the U.S. Gulf Coast region.

The hectic hurricane season has outnumbered the list of 21 names designated to identify systems, forcing the National Hurricane Center (NHC) to resort to using the Greek alphabet for only the second time ever.

The NASA Global Precipitation Measurement (GPM) Core Observatory satellite captured data on the intensity of precipitation as it passed over Hurricane Delta approaching the Gulf Coast on Thursday. In the video, both the storm's eyewall and dense outer rain bands are visible.

While offshore over the waters of the Gulf, Hurricane Delta also dealt an immense blow to the region's oil and natural gas output in the region. According to Reuters, the hurricane halted all of the oil output and nearly two-thirds of natural gas output from offshore facilities. The consequence has hit Americans in the wallet, as natural gas prices on Friday were on track to close at the highest since November 2019.

Delta has shut 1.67 million barrels per day, or 92% of the Gulf’s oil output, the biggest dent made by a storm since Hurricane Katrina in 2005. 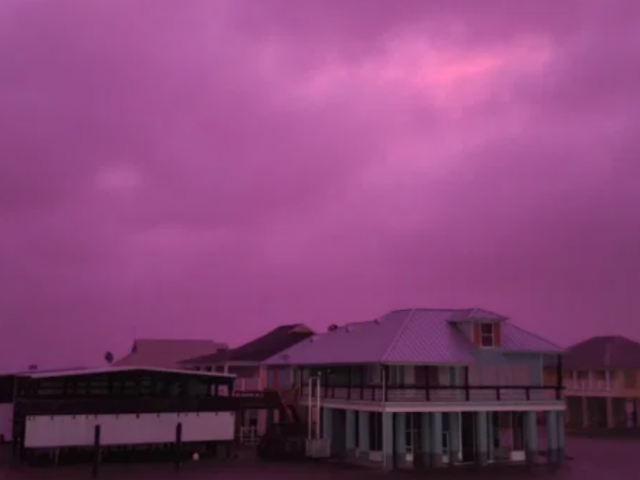 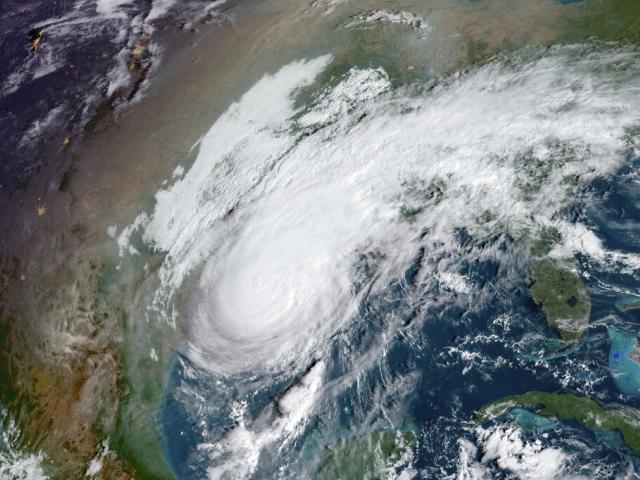