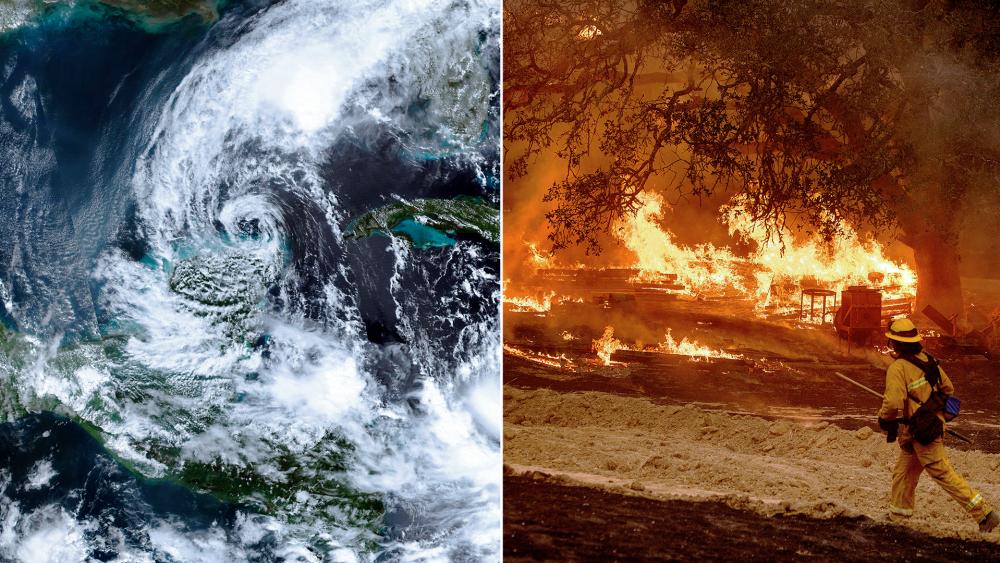 Natural disasters continue to assault America as wildfires, hurricanes, and tropical storms are striking states across the country. Now the latest hurricane to threaten the US has just been upgraded to a very powerful Category 4 storm.

In California, a single fire is making history after consuming more than one million acres so far.

Dozens of fires have scorched more than 4 million acres in the state this season. That's more than double the previous record, with months to go before the rainy season.

"We used to think a 50,000-acre fire was huge. Now we're dealing with an average of over 300,000 acres," said Scott McLean, a spokesman for the California Department of Forestry and Fire Protection, who referred to this year's wildfires as "horrendous."

An image shared by an astronaut in space shows the destruction caused by the California wildfires.

Meanwhile, in the Caribbean Sea, Hurricane Delta was upgraded to a Category 4 storm on Tuesday with winds reaching 130 mph as it heads toward Cozumel and Cancun in Mexico.

The area expected to be impacted the worst includes the resort area along Mexico’s Yucatan Peninsula.

And AccuWeather reports the hurricane will continue to strengthen. "There is a chance Delta may spend some time at Category 5 strength," AccuWeather's top hurricane expert Dan Kottlowski said.

#Delta has continued to rapidly intensify overnight and is now at category-2 strength. Here are the Key Messages for this #hurricane on this early Tuesday morning. The latest NHC forecast is at https://t.co/tW4KeFW0gB pic.twitter.com/MUal1JCwHZ

"I honestly don't see much that will stop it until it reaches Yucatan, due to low vertical wind shear, high deep-layer moisture, and the very warm and deep waters of the northwestern Caribbean," said National Hurricane Center forecaster Eric Blake.

After the storm moves on from Mexico, it is expected to become stronger - bringing winds of up to 130 mph as it approaches the US Gulf Coast on Friday.

It's not an airplane, and it's not a faucet. It's Hurricane Delta. Delta has intensified into a Category 2 and is forecast to become a major hurricane, threatening the Yucatan Peninsula and eventually the Gulf Coast. Follow @NHC_Atlantic for the latest information on #Delta. pic.twitter.com/Rt6ykQyL7e

Forecasters are urging residents along the upper Texas coast and Louisiana to the western Florida Panhandle to have a hurricane plan in place by Thursday evening.

Recovery efforts are still ongoing in communities along the Alabama coast after Hurricane Sally made landfall on Sep 16.

But, locals are now being warned to prepare for the damaging effects that will result from Hurricane Delta.

Delta is the 25th named storm in the 2020 Atlantic hurricane season and could make US history as the tenth named storm to make landfall this season.