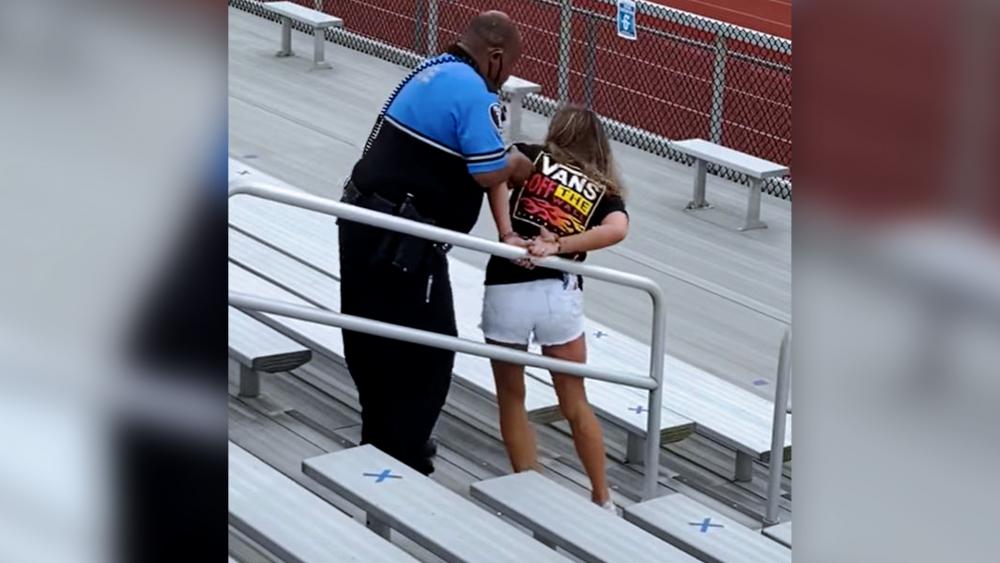 The Ohio Star reports Alecia Kitts drove an hour and a half from Marietta to Logan, Ohio to watch her son's football game.

Video footage taken of the incident that runs for more than three minutes shows Kitts seated with her family, minding social distancing protocols, but also shows she was not wearing a mask. Ohio has a mask mandate but only if you are indoors and cannot social distance, according to PJ Media.

Sometime after the beginning of the game, she was approached by an officer with the Logan Police Department because she was not wearing a mask.

That's when the police officer arrested Kitts and began trying to put her in handcuffs. She resisted the officer's attempts to cuff both of her hands with both of them sliding down the seat row towards the cell phone camera.  An unidentified woman remains at Kitts's side while attempting to talk to the officer while he was struggling with the woman.

Tiffany Kennedy, an eyewitness who shot the video of Kitts' arrest, said the woman had not been warned about not wearing a mask. Kennedy also said Kitts suffered from asthma and that was why she was maskless, according to the Ohio Star.

In the video, a scream is heard as the officer tases the woman in front of children and other families in the stands. A man can also be heard yelling, "Come on, now." That's when Kennedy exclaims, "There is no reason to tase someone and arrest them for not wearing a mask."

Kennedy noted that the female officer who runs up to the officer and Kitts was also not wearing a mask, but she pulls one out of her pocket as she approaches the two.

Apparently, when the officer tased Kitts, the charge went through the metal bleachers and also struck a child sitting close by.

The police department has declined to comment on the incident. Kitts was charged with criminal trespass and released, according to the Ohio Star.