Anti-Racism Organizer Arrested in CA After Driving Car Into Counterprotesters 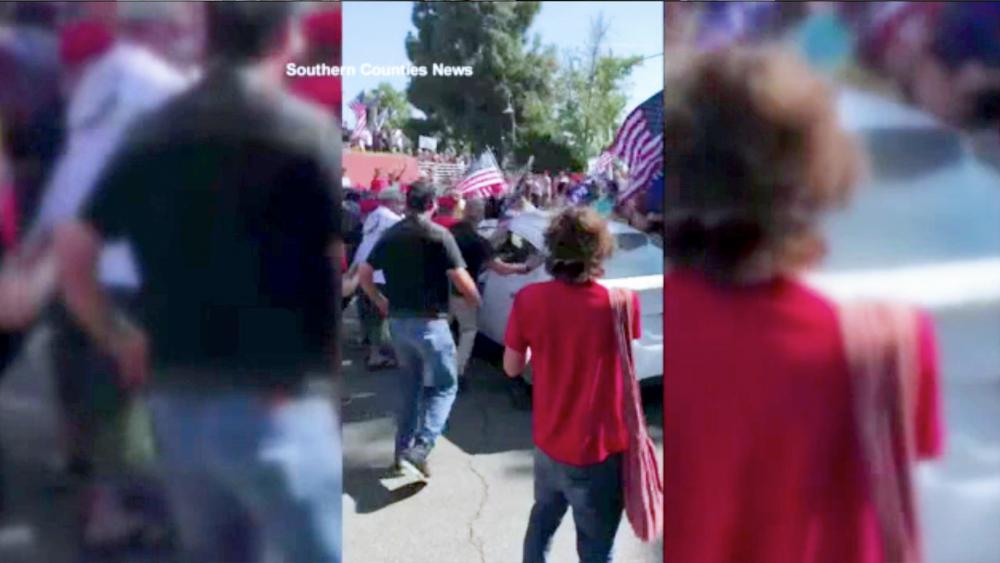 LOS ANGELES (AP) — An organizer of a Southern California demonstration against racism was in jail Sunday on suspicion of attempted murder after authorities say she drove through a crowd and struck two counterprotesters.

Tatiana Turner, 40, was arrested Saturday in Yorba Linda after speeding from a parking lot when her car was surrounded by shouting counterprotesters.

Demonstrators on both sides who had clashed on a sidewalk earlier had been ordered by police to leave the area at the time and an angry mob had surrounded Turner’s car and wouldn’t let her drive away, said Anthony Bryson, who helped plan the event for the Urban Organizers Coalition.

“People had broken her windshield,” Bryson told The Associated Press. “She was trying to leave. She was in fear for her life.”

Several dozen people in Turner’s group had been preparing to march against police brutality and systemic racism at the Yorba Linda library about 30 miles (48 kilometers) southeast of Los Angeles when a group of people, many hoisting American flags and Trump 2020 banners, grew on the other side of Imperial Highway.

The two groups initially stayed apart, as authorities requested, but a group of men crossed the six-lane highway and confronted the racial justice group in a series of angry exchanges.

As the confrontation grew and became heated, the Orange County Sheriff’s Department declared an unlawful assembly and told the groups, estimated at 250 people total, to leave after fights were reported and some people were said to be carrying weapons. One person pepper-sprayed another protester and one man was arrested for disobeying the order to leave, police said.

Video of Turner shows a crowd of people standing around her car as she accelerates forward. Her rear window shatters as she drives away. The car lurches upward and then continues forward. More than a dozen people gave chase.

A man with a broken leg and a woman with moderate injuries were hospitalized, authorities said.

Turner is being held on $1 million bail and expected to appear in court Tuesday, according to a county website.

The city of Yorba Linda does not require a permit to demonstrate for crowds smaller than 500 people and neither group had a permit, sheriff’s spokeswoman Carrie Braun said.

Bryson said the group had been in discussions with police and the Yorba Linda mayor in advance. He said the police had failed to intervene.

Braun defended the police response, saying officers attempted to keep people apart and took action when there were altercations.

The Urban Organizers Coalition issued a statement expressing its “heartfelt sympathies” for those injured.

The protest came three days after an Orange County deputy in San Clemente shot and killed a Black homeless man. The sheriff released a video that he said showed the man grabbing for the officer’s weapon.

Several drivers have recently collided with protesters across the country, including at a gathering Thursday in Los Angeles.

A woman protesting police brutality was struck by a pickup truck during a march in Hollywood and suffered non-life-threatening injuries. Los Angeles police said Friday the preliminary investigation found that the driver was attempting to maneuver through the crowd when protesters began beating the vehicle with sticks.

The driver stopped several blocks away and cooperated with officers. He was released pending the outcome of the investigation.