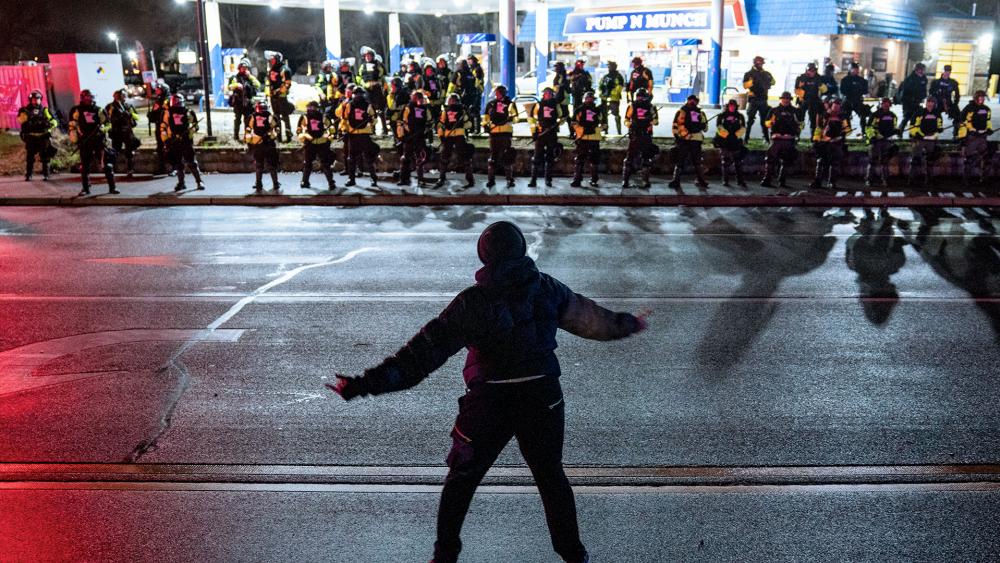 In her resignation letter, Potter wrote "I believe it is in the best interest of the community, the department, and my fellow officers if I resign immediately," The St. Paul Pioneer Press reports.

Violence continued overnight in Minnesota as demonstrators took to the streets after Wright was shot during a traffic stop on Sunday.

Hundreds of protestors faced off against police in the Minneapolis suburb of Brooklyn Center just hours after Gov. Tim Walz announced a curfew from dusk to dawn.

At least 40 people were arrested Monday night at a Brooklyn Center protest and 13 protesters were in police custody early Tuesday morning in Minneapolis. Officers said most of the arrests stemmed from curfew violations and rioting.

We are live outside of Dollar Tree in Brooklyn Center.

Officials say about 40 people were arrested overnight in the Twin Cities. @KSTP pic.twitter.com/GfZlvkLzy6

The second night of demonstrations comes after Gannon said he believes the killing of Wright was an "accidental discharge" by the officer involved.

Wright was pulled over for a traffic stop, then allegedly tried to flee. Officer Potter, a 26-year veteran, pulled her gun out during the incident but meant to use her taser.

"It is my belief that the officer had the intention to deploy their taser but instead shot Mr. Wright with a single bullet," said Chief Gannon.

According to the Hennepin County Medical Examiner's office, Wright died of a gunshot wound to the chest.

Potter can be heard on tape warning Wright that she would tase him. She's been placed on administrative leave while officials investigate the tragic event.

Wright's father, Aubrey Wright, told ABC's "Good Morning America" that he can't believe the officer accidentally discharged her handgun rather than her Taser.

Meanwhile, the trial of former Minneapolis officer Derek Chauvin continued on Monday. Chauvin is charged with the May 25 death of George Floyd.

Floyd's death set off protests and a national reckoning on race, and now the question of criminality lands Chauvin on trial, charged with second-degree murder, manslaughter, and third-degree murder.