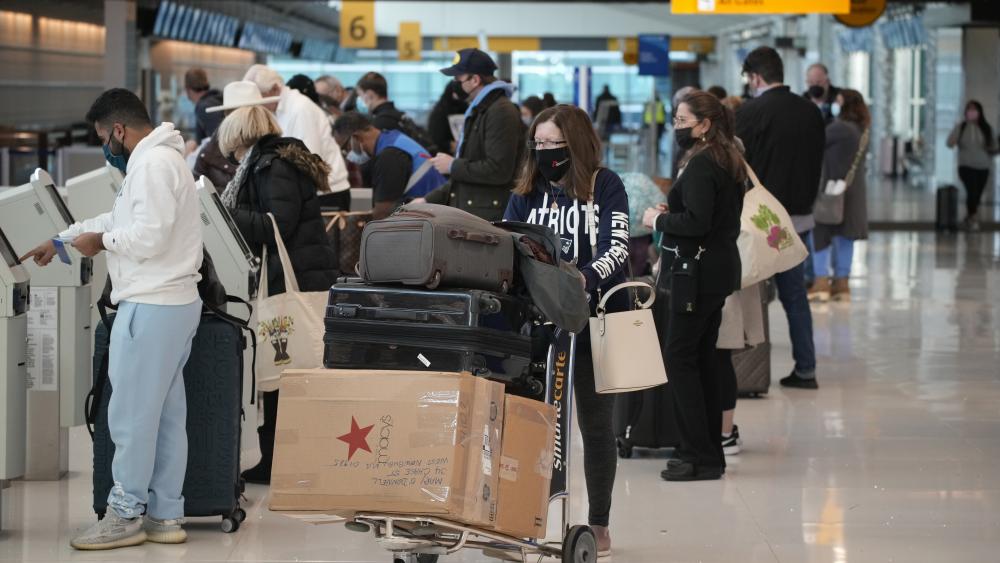 Travelers queue up at the United American Airlines check-in kiosks in the terminal of Denver International Airport Sunday, Dec. 26, 2021,
6288862217001
Holiday Travel Nightmare Ensues as Airlines Cancel Hundreds of Flights Due to COVID

Air travelers heading home after the Christmas holiday are facing some major head winds. Thousands of flights have been canceled as the omicron variant spreads among airline crews.

The travel woes from coast to coast aren't getting any better as the week kicks off.

"I'll probably get a hotel and then try again in the morning," said a stranded air passenger.

As of early this morning, FlightAware, the website that tracks flights across the globe, says more than 2,100 flights have been canceled in the United States alone today, with Delta, United, SkyWest and American experiencing the most cancellations.

In all, more than 8,000 flights have been affected globally since the start of Christmas weekend on Friday, with U.S. and Chinese destinations hardest hit.

The scramble is happening just as the Christmas travel season, typically one of the busiest for the industry, is hitting at the same time as the Omicron variant surges.

"United and Delta have been vocal in admitting that many of these cancellations are because of COVID," said Henry Harteyeldt, with Atmosphere Research.

Airlines across the board have been forced to scrap flights because pilots and cabin crew are in self-isolation.

"If you see a lot of people getting sick, you can assume that some of those folks work at the airline you're supposed to fly this week," said Harteyeldt.

And it's not just the pandemic that's causing all the travel havoc.

On the ground, a major snowstorm closed key highways in Northern California and Nevada. The same winter storm also hit parts of western Washington as well.

"I was stuck in my driveway and I couldn't get out," said Sierra Stratton of Glenhaven, WA.

In Mount Vernon, Washington, city crews are working around the clock to keep streets safe, but it could be a while before things totally clear out.

Despite the travel headaches due to COVID and weather, consumers were still in the mood to spend money this holiday season.

New retail numbers saw an 8.5% jump over last year. Online sales were up 11% and in-store sales up 8% between November first and Christmas Eve.